The episode Meglos is easily distinguished in every fan’s mind from all other episodes, with no possibility of confusion about which one it is. It is one that I have a clear visual memory of, and would probably have said (if I was just relying on my recollection from decades ago) this is “the episode in which the Doctor turns into a cactus.” Even if one saw it last when they were young, and that they as decades ago, the visual images and impression remain, even if not necessarily coupled with an accurate recall of the plot, since those who have seen it more recently or remember it more clearly will know that the Doctor doesn’t turn into a cactus, a cactus turns into the Doctor. 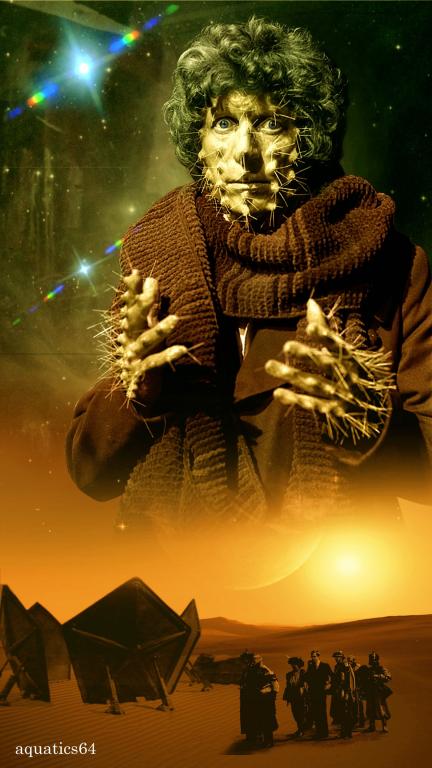 My memory of the episode was clearly sketchy, and another thing I had forgotten completely (not having been as interested when I first saw it as I am now) is the exploration of religion in the episode. The episode features Jacqueline Hill, who previously played Barbara, one of the original companions from Doctor Who when it first aired, now playing the role of Lexa, a religious leader on the planet Tigella in the Prion planetary system. There are lots of interesting ideas, including a particular focus on sentient plants. Another is an object called the dodecahedron, which powers the planet and thus is the object of religious reverence and rules on that world. A sentient plant with the ability to take the forms of humanoids and pretend to be them has a plan to steal it (or reclaim it, since it is originally from his now barren world of Zolfa-Thura), saying that the Tigellans are using only a fraction of its power potential. Here are a few key quotes and concepts for those interested in religion on Doctor Who:

The Deons have declared her plan a blasphemy.

Conflict between religion and science.

“The dodecahedron is not a god, it is an artifact.”

Lexa says the Dodecahedron has been taken back by the god. She plans to offer the Doctor as a sacrifice to appease the god.

The death of Lexa at the hand of a seemingly dead pirate is pointless and surprising, except as karma. Doctor Who doesn’t let those who imperil the heroes live.

The trope of super-advanced alien technology becoming a focus of religion is widespread in science fiction in general and in Doctor Who in particular. There is something distinctive and striking, even if distinctly implausible, about the technology stemming from an advance race of plants and being misunderstood by inhabitants of another world who are essentially human in appearance. The trope is at once trite and provocative in this form.

The episode ends with a call to return to Gallifrey, although of course as one might expect the journey back doesn’t follow a straight path.

I am told the episode aired again somewhere recently. Did you catch it when it was on? Do you remember it from decades ago? Has it improved or worsened with age in your estimation?

Doctor Who and the Cancellation Monster

How to Avoid Paradoxes While Traveling Thru Time

You can apparently watch the episode online. Here is part one: