I have blogged about the Genesis song Supper’s Ready before (links to those previous posts at the end of this one). After an introduction to Genesis by way of their music from the Phil Collins era, my cousins played for me and then actually gave me one of their LPs, the album Foxtrot which includes the song/suite that is the length of an album side, Supper’s Ready. Long songs/suites are of course typical of prog rock. I will confess that even long after I had become a huge fan of Genesis, the song “Supper’s Ready” in its album version never really grabbed me. It intrigued and puzzled me, and I appreciated it, but one thing it never really seemed to be was rock music. Even as I returned to it looking at the lyrics and thinking about what I would write about the song in the book I am writing together with Frank Felice on progressive rock, this remained true. Then, just very recently, I watched this video of a live performance from the Peter Gabriel era, and my entire impression of the song shifted. Seriously, watch it or at least listen to it:

Perhaps one of the points I should make in the book, but will at least make here, is the parallel between music performed live and lived religion. A number of the New Testament authors emphasize the point that Paul makes particularly succinctly in the phrase “the letter kills, but the Spirit gives life.” A text is at best a shadow of a lived reality, whether it is a musical score or a Gospel. Some bands, to be sure, are very polished in recordings and their live performance is but a shadow of it. For others, like early Genesis, the reverse was often the case. In an era in which there is a lot of scripture-focused religion that seems to be lacking the Spirit and life, not only in the sense that is sometimes leveled as an accusation, that they are lacking in vibrancy, but in the sense that the lived reality among the most staunch biblicists, conservative Evangelicals, has shown itself to be full of hatred, partisanism, idolatry, and gullibility.

The Bible is like sheet music. The point is not to praise its authority or to boast of the importance of sticking to it faithfully, but to perform it.

Speaking of recordings, the performances of Evangelical leaders today are being noted and, thanks to the internet, are heard far and wide and will not be easily forgotten. I’m glad that we have recordings of musical performances from the past like the Genesis one I shared above. I suspect that many Evangelicals will not be so grateful for the fact that, for years and perhaps decades to come, one will be able to go onto YouTube and hear once again the things that they said, the lies they believed and told.

Dare I hope that perhaps this analogy I’ve made, at the intersection of Genesis (the band) and religion, might lead some Evangelicals to think harder about the nature of scripture, their religion, and the legacy of how they are performing their religion in our present context?

Genesis fans and anyone interested in “Supper’s Ready” should definitely also listen to this interview with Tony Banks about the process of writing the song: 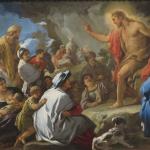 December 20, 2020
John and Jesus as Rebellious Sons
Next Post 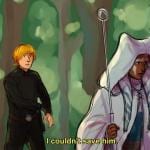