The Story of the Cover Art for What Jesus Learned from Women March 22, 2021 James F. McGrath

I hope that Macey Dickerson’s fantastic artwork for my book What Jesus Learned from Women will get attention in the media at some point in its own right. When I spoke to Butler alumni about the book recently and shared the story, the response was immediate that it is a story that needs and deserves to be told. The initial question was actually whether the story is told in the book itself. The answer is no, as cover artwork only becomes a focus once a book is essentially completed. This is why the story needs to be told elsewhere. I hope that Macey Dickerson gets to tell the story from her own perspective as an artist. From my perspective, it was incredibly encouraging and deeply moving to see artwork inspired by what I had written. Indeed, I will say again that when I saw the finished cover with the amazing artwork combined with the title on the front and the endorsements on the back I was emotional in a way I have never been seeing the cover of any other book of mine.

Publishers often ask an author for suggestions for cover art. Initially I wanted to include a catacomb fresco depicting Jesus and the Samaritan woman. Usually art has Jesus sitting in a teaching position while the woman stands and learns. This ancient art, drawn to my attention by Dr. Ally Kateusz, has both standing, representing the conversation as a mutual dialogue. When it turned out that this artwork could not be used, I inquired about the possibility of commissioning something specifically for this purpose. The publisher was supportive and so I began thinking about and looking into who to approach. Macey Dickerson came to mind quickly. A local Indianapolis artist, Macey grew up in Crooked Creek Baptist Church, of which I too am now a member. I shared the details of the project with her including the artwork I had considered using. After a very short period of time she was able to send me what she called a rough sketch but which was already really impressive. The way we see the woman over Jesus’ shoulder as she makes contact with us, the way we get a sense of the wisdom she has to share if we will listen to her and get to know her story, make a powerful impression and encapsulate the book’s point impressively in a single image.

I am happy for this book to be judged by its cover. I also hope the story of the cover and of the artist behind it will get attention in their own right. They deserve to.

You can buy prints of the artwork through the Society6 website. I hope that not only individuals will get it but that churches that display art featuring biblical scenes will do so. Its message is powerful and effective on its own, and perhaps more so without obtrusive words getting in the way.

March 21, 2021
The Past, Present, and Future of Christianity in Science Fiction
Next Post 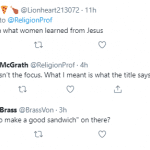 March 24, 2021 Why What Jesus Learned from Women Needed to Be Written
Recent Comments
0 | Leave a Comment
Browse Our Archives
get the latest from
Religion Prof: The Blog of James F. McGrath
Sign up for our newsletter
POPULAR AT PATHEOS Progressive Christian
1