The phrase “but God alone” (εί μή εις ة θεός) is identical in 2:7 and 10:18. It alludes to the Shema in the form in which it was often summarized in Second Temple period Jewish literature: “God is one” (είς θεός έστιν)٠

This is really striking given that both of these texts are quite crucial to how we understand the Christology of the Gospel of Mark as a whole.

The first one sees Jesus respond with a healing that is intended to demonstrate that God has given the son of man authority to forgive sins.

Perhaps the point made through the similar language is that inherent goodness is a different matter. God has delegated some authority to human beings in general (or perhaps, if one thinks Son of Man is a messianic title here, to his anointed one). Goodness, on the other hand, is not something that can be bestowed the way authority can. Human beings fall short, and one of Jesus’ main aims was to call his people to repentance, a people persuaded of their own inherent goodness as the people of God. Jesus thus takes aim at the fact that “good” had become a form of respectful address, not always reflected in reality.

One of the only places I’ve seen this connection made a focus of attention is in John J. R. Lee’s article “The divinity of Jesus and the uniqueness of God: are they compatible? A reflection on high Christology and monotheism in Mark’s Gospel” in Midwestern Journal of Theology 15:1 (2016) 84-100. He uses Bauckham’s concept of “divine identity” which I have evaluated critically in the past and find unhelpful. I’ll include some links to those posts below.

What do readers of this blog think? I’m among those who are not persuaded by attempts to read ideas like pre-existence and ontological divinity into the Gospel of Mark. Does the similar phrases in these two passages fit, confirm, or challenge that conclusion I had drawn previously? What do you think and why?

Nope. Jesus is Not Yahweh.

A Heresy that May Not Sound Heretical to You: Arius of Alexandria

You Call *This* a Heresy? The Views of Arius, In His Own Words

“How the Spirit Became God” on The Intersection Podcast

Angelification – Becoming an Angel at Death?

Mike Bird provides a teaser for other subscription-only posts with “Is Jesus Merely an Angel?” But his review of George Hunsinger’s commentary on Philippians is free for all readers.

Open access book on the Apostle Peter and his reception

Jim Davila drew attention to a new book on pre-existence in ancient Judaism and Christianity, another on how angels are represented, and yet another on the Gospel of Matthew in its theological and historical context.

How can Jesus promise eternal life?

The rise of the early Christian intellectual

Living and Loving in the Way of Jesus

Ken Schenck on the mission of Jesus

3D imaging of the Church of the Holy Sepulcher

Investigating the Church of the Holy Sepulchre

Here are those prior blog posts about divine identity, as promised:

Review of Richard Bauckham, Jesus and the God of Israel

Jesus among Other Exalted Humans

A Man Attested By God: Daniel Kirk on the Human Jesus of the Synoptic Gospels 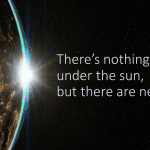 April 24, 2021
The Past, Present, and Future of Christianity in Science Fiction: Conclusion
Next Post

April 26, 2021 No My Goodness!
Recent Comments
0 | Leave a Comment
"I doubt there are any specific requirements to attend."
James F. McGrath Bratislava Conference 2022 – Receptions of ..."
"Are non-academics allowed to attend this online conference?"
LivingEND Bratislava Conference 2022 – Receptions of ..."
"It doesn't translate words. There is a long history of finding significance in individual letters, ..."
James F. McGrath The “Original Aramaic Lord’s Prayer” is ..."
"You can see that in the spirit of what he is doing."
bflaherty The “Original Aramaic Lord’s Prayer” is ..."
Browse Our Archives
Related posts from Religion Prof: The Blog of James F. McGrath