Thinking more about the language used in the two texts from Mark’s Gospel that were the focus of my post yesterday, I was struck by the broader implications of what is said about authority and goodness.

God has given authority to human beings. No one is good but God. Others have power, even if to a limited degree. We can do things that God also does, even if on a smaller scale. We do not possess innate goodness in a similar way.

The relationship between goodness and power/authority comes up most often in the context of discussions about theodicy. The free will defense argues that God has made other beings with power in the universe and so do not control everything. God’s goodness is safeguarded at the expense of power and control. God has delegated authority to humans and other beings. It is the fact that we have power but lack goodness that accounts for evil in the world. Ancients who attributed power but not goodness to angels and spirits believed that natural evil could be explained in this manner as well. Or to put it another way, natural evil did not arise for them as a distinct category from moral evil.

Jesus’ words seem related to this broader way of thinking about God and the world. What do you think? Might these two texts together provide important clues about Jesus’ theology, cosmology, demonology, and so on?

We could connect this to the fact that even Jesus, who could on one occasion forgive sins and heal, on another could not do miracles in his home town (Mark 6:5). We are told that he was amazed at their lack of faith and that they took offense at him. We perhaps jump to conclusions, thinking of faith in relation to modern use of the term and also to our terminology of “faith healing” and awareness of the power of belief itself to have a powerful psychosomatic impact on wellness. In the story, the people are showing a lack of faithfulness towards this native son. They take offense at him, despite not only hearing about but apparently affirming that he had done miracles. Viewed from our modern perspective we can see that their attitude included a lack of the kind of faith that is conducive to experiencing healing and other such things. We need not choose between those possibilities. But either way, a lack of goodness not only causes some to use their power and authority in ways that are evil, but also interferes with the actions of those who wish to do good through the power and authority that God gave them. And so there are three questions we might ask, all related to the problem of evil and the Gospel of Mark. The first is what clues if any this provides us with about what Jesus may have thought and understood about God and about the power of God he perceived to be at work in and through him. A second is whether the author of the Gospel of Mark thought there were connections to be drawn of the sort that I do here. A third and final question is what readers and interpreters today might do with the possibilities that the text offers.

As always, I invite your discussion and look forward to hearing your thoughts! 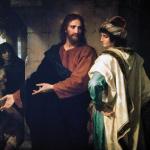 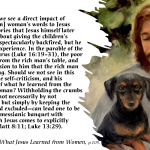