I had the privilege of having a conversation with Prof. Sara Parks, author of a superb monograph on the gender pair parables in Q, hosted by Jonathan Stewart on the online podcast and video talk show TalkGnosis. Have a listen in audio format or watch the video below (or both)!

Bart Ehrman kindly gave me the opportunity to write some guest blog posts for his blog about my book What Jesus Learned from Women. The first one has appeared and it is about the possibility that Paul’s relative Junia was a leader in the Christian movement from very early on, being known from the Gospel of Luke by another name: Joanna.

Did the Paul the Pharisee Learn about Christianity from his Relative, the Apostle Junia? Guest Post by James McGrath

There will also be a couple more guest posts on Ehrman’s blog in the coming weeks. I am also grateful to the shout-out on the Christian Feminism Today website.

Also of related interest to What Jesus Learned from Women:

Here’s an episode of that new podcast:

Beth Allison Barr and Kristin Du Mez spoke with Scot McKnight together in a wonderful webinar recently. They have now made the video recording available online, and so I am sharing it here:

Here they each are talking to him individually on his Kingdom Roots podcast:

There are numerous other episodes of that podcast related to this topic, so do browse them as well.

The Baker website has a study guide for small groups reading and discussing Barr’s book.

Barr was influenced by Junia (among others) to change her stance. Barr writes in Relevant magazine:

No matter how much Moore wants to separate “pagan patriarchy” from “Christian patriarchy,” he can’t. Both systems place power in the hands of men and take power away from women. Both systems teach men that women rank lower than they do. Both systems teach women that their voices are worth less than the voices of men. Moore may claim that women only owe submission “to their own husbands,” not to men “in general,” but he undermines this claim by excluding women as pastors and elders. If men (simply because of their sex) have the potential to preach and exercise spiritual authority over a church congregation but women (simply because of their sex) do not, then that gives men “in general” authority over women “in general.”

Inscriptions reveal aspects of the lives of ancient women, including their status and influence, that we miss if we just rely on patriarchal authors and the texts they left behind

A couple of new blog posts about the story of Jesus and the Syrophoenician woman:

God’s kingdom among the dogs: Jesus and the gentile beggar

Jesus and the Syro-Phoenician ‘Dog’

These resources from the Center for Hebraic Thought will interest you (and I’ll have more on that topic in the not too distant future):

A Gender Study: The Real Lives of Women and Men in the Bible

Study: Women Who Attend Churches They’re Not Allowed to Lead Have Poorer Health

Teaching Religion and Sexuality Respectfully: Can We Do Both?

A Review of #ChurchToo: How Purity Culture Upholds Abuse and How to Find Healing

Moving from Exclusion to Embrace in the Gender Conversation

I AM and #MeToo: the Incarnation and violence against women

This is not what it means to be a “woman of God.”

Look Beyond the Biblical Canon

An excerpt from How Women Transform Preaching.

Also about Junia (among others):

Andrea Hartmann, “Junia – A Woman Lost in Translation: The Name IOYNIAN in Romans 16:7 and its History of Interpretation”

Previously here on the blog:

Times Will Tell Podcast About What Jesus Learned From Women

And finally, a meme from my book: 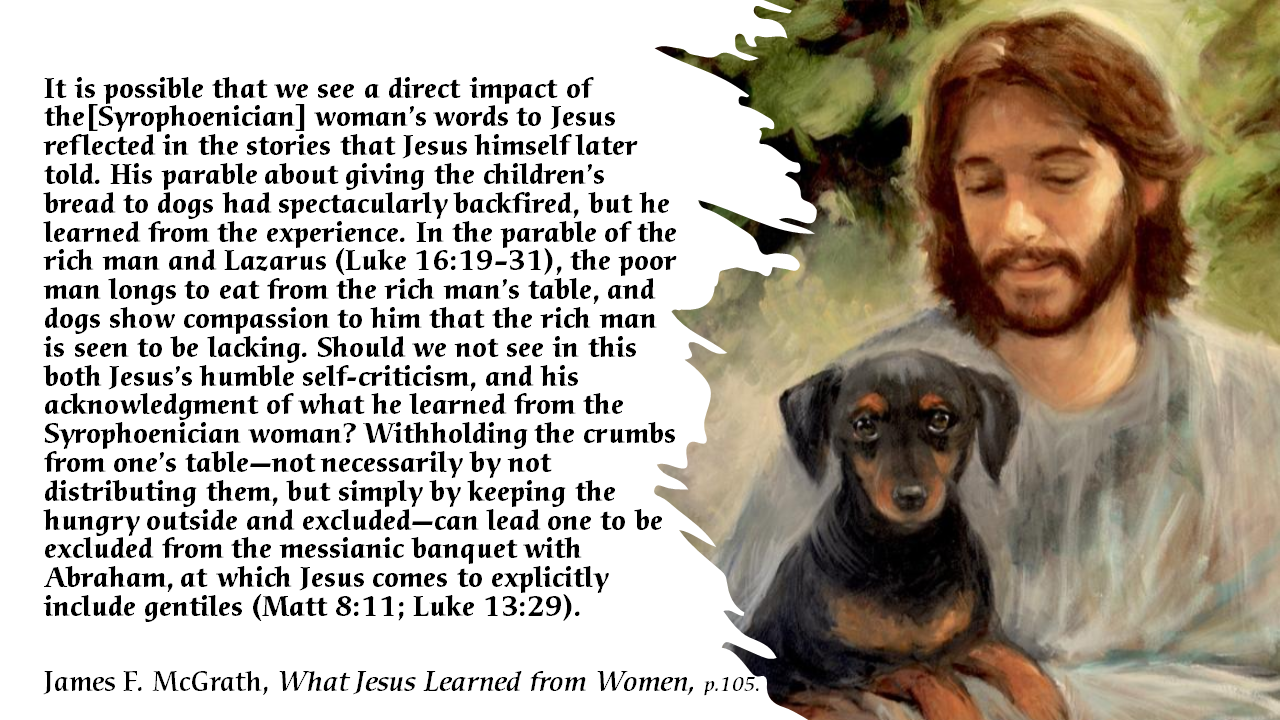 April 28, 2021 Multiverse Science Fiction & Fantasy Convention #CFP
Recent Comments
0 | Leave a Comment
"Did you read the post or did you just see the title and do what ..."
James F. McGrath Mythicism and the Early Christian Band
"It must be sad, first, not to be able to tell the difference between ghost ..."
Vance Morgan Think Outside The Box (The Cutest ..."
"HA.I don't believe the silly ghost stories you fell for.P.S. thankfully for you, there were ..."
Patrick O'Malley Think Outside The Box (The Cutest ..."
"See also 4Q372 f1,4-5.11 (speaking even of the Southern Kingdom of Judah):... He gave them ..."
robrecht All Israel Will Be Saved
Browse Our Archives
get the latest from
Religion Prof: The Blog of James F. McGrath
Sign up for our newsletter
POPULAR AT PATHEOS Progressive Christian
1