I won’t present my discussion of Mike Bird’s book Jesus The Eternal Son: Answering Adoptionist Christology as a review, since I am less interested in summarizing the book with a view to help people decide whether or not to buy it (it is $2.99 for Kindle and so if you have the slightest inclination to buy it you probably already own it) than in getting a conversation started about its subject matter and addressing some of its key points and arguments. I am also so long overdue to blog about it that reviewing his 2017 book now would really need to be accompanied by an apology for the delay. (Okay, okay, I’m sorry Mike, and sorry Eerdmans, and my apologies to other blog readers as well while I’m at it for taking so long to get to this.)

First, let me say that I am grateful that Mike interacted with and cited my own work on Christology (in particular my book The Only True God about early Christian monotheism). Having anticipated that we disagree, I was very happy to find that the treatment of the subject was on the whole balanced and fair, with alternative interpretations of relevant texts to that which Mike finds most persuasive given due consideration and, where appropriate, acknowledged as possible even if Mike himself does not find them preferable or persuasive.

Mike takes a narrow approach to adoptionism, which has come to be used in much broader and vaguer ways. By the end of the book, I felt as though Mike were trying to eliminate adoptionism from early Christianity simply by means of definition. As he rightly notes, many Christologies that are often lumped into that category are better termed exaltationist or something similar. The point is not that Jesus lives a righteous life and so earns the status of Son of God, but that God exalts and enthrones him as Lord, as viceroy second only to the one God. Having emphasized this point, however, Mike fails to apply that to the modern theological stances that he critiques, extremely few of which would be labeled by those who advocate for them as “adoptionist,” and those that do (such as John Knox) are using it in the broad way that would also then apply to some early Christian texts.

Mike adopts (hee hee) Bauckham’s unhelpfully vague terminology of “divine identity” which I think is used by many (whether consciously and deliberately or not) as a way of being able to say Jesus “really is God” to those who would otherwise worry about their orthodoxy and perhaps fire them, while at the same time being able to claim not to simply read later Nicene orthodoxy into the New Testament. This is a longstanding balancing act that conservative Evangelical and other more traditional scholars have performed in the field of New Testament. Having discussed the text in Exodus 23:20-21 that is part of Mark’s composite citation in 1:2-3 (pp.85-86), Mike doesn’t wrestle with the fact that there an angel embodies the divine presence and bears the divine name. This seems like a perfect model for what the earliest Christians said about Jesus. While redefining monotheism would have been controversial in ways that early views of Jesus seem not to have been, positing a second figure that represents God, embodies the divine presence, acts on God’s behalf, and/or exercises divine authority and rule would not have been, provided that this figure is ultimately subordinate to the one God, which is said or implied everywhere throughout the New Testament writings (pp.89-90).

I was also disappointed that there was no discussion of the arguments that the Gospel of John might have an adoptionist Christology, as set forth by Charles Talbert, Francis Watson, and a handful of others, including me in my first article related to my research on Christology, “Johannine Christianity: Jewish Christianity?” Koinonia (1996) pp.1-20.

I agreed completely with Mike’s emphasis that many of the brief slogans and creeds embedded in the New Testament writings are like early Christian “bumper stickers,” with the corollary that we should not make too much of them. This applies, however, to not only texts like that in Romans 1 that might seem to have Jesus become the Son of God only when raised from the dead, but also to texts like Philippians 2:6-11, which even if not a hymn is clearly poetic in character, and it is astonishing how many people will insist on a very precise meaning of the “form of God” as denoting inherent nature, and yet will insist that his appearance as a human being is more than mere appearance as the passage states.

I also appreciated that he is up front (at the end of the book, but you know what I mean) about the theological reasons for his Christological and exegetical preferences. I likewise appreciated his clear statement that there is a limit to the Christological weight that can be placed on allusions and echoes. Readers of conservative commentaries will often encounter assertions that, while Jesus is not said in so many words to be God in the flesh, there is an echo in this passage or that which resonates with one in the Jewish Scriptures/Old Testament about Yahweh. There is much more than that: Jesus is depicted as bearing the very name of God and exercising divine rule over all creation on God’s behalf. Those allusions, in my view and that of many other scholars, are perfectly compatible with the understanding that makes the most sense of all the evidence: Jesus is God’s agent. As the anointed one and Son, exalted to the right hand of God, Jesus rules over all things – all things except God, that is, as Paul makes explicitly clear in 1 Corinthians 15. That Christology, like that of other New Testament authors, is better categorized as exaltationist than adoptionist. But it isn’t modifying Jewish monotheism, and adding language such as “divine identity” into the mix doesn’t clarify but obscures the meaning of what is said about Jesus.

So was this a review in the end? I still don’t think so. But perhaps, as with adoptionism, there is only so far that an attempt to be precise with labels can go. When it comes to the substance of New Testament Christology, as to the substance of blog posts and reviews, hopefully what I have offered here is clear, and with any luck, Mike will be in the mood to respond and have a conversation about this topic. If we had more conversations in the New Testament – both sides of the conversations – we would probably be a lot clearer about many points than we are.

Here’s a video Mike shared about this topic:

Also related to Christology in some way:

Ken Schenck on the story of salvation

Why Jesus’s Humanity Matters as Much as His Divinity 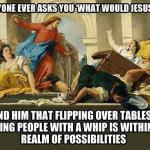