When the Dolphin rises an hour before sunrise in the first flush of dawn (19 Jan) and later swims above the East beneath Vega as the sun rests on the horizon towards the southeast, and the first quarter of the moon at nones has not yet been seen, then is the time to celebrate the Compitalia. Celebrated these days are the Lares whose friendly spirits inhabit our neighborhoods and travel our roadways.

Every place has its unique character, which neighbors have built up over the years. In the old neighborhood, where I once lived in Cleveland, the rag man would clip clop through the brick streets on his horse-drawn cart, as he called out for samples of old cloth that he would sell to the paper mills. And in the sweltering heat of summer, the hooves of his horse awoke us to his song, “Waa-ter-melon!” Long after he had passed you could still hear his horse against the bricks. The neighborhood had heroic cats, too, famed for their bravery in eliminating pests. There was the barber who kept a fish bowl in his front window with a tag, “Beware: invisible sharks.” The baker, the librarian, the funeral director each contributed something to the character of the neighborhood. The neighborhood had its military heroes and its beloved residents whose memory and spirits lived on in our community.  In the Religio Romana we remember these protective spirits of our city, its neighborhoods, and its roads as Lares praestites, Lares compitales, and Lares Viales, respectively.

Begun by Tullus Hostilius, the third king of Rome (673-642 BCE), the Lares were traditionally offered water with which to wash themselves, staples of salt and olive oil, libations of milk, bread, honey, red flowers and candles. The last kings of Rome, the Greek Tarquins who arrived from Etruria, introduced blood sacrifices into the Compitalia. However in 509 BCE, led by Junius Brutus, the Romans overthrew the Tarquins and established the Republic. The Numa tradition was restored at that time in the temples and festivals that predated the Tarquins.  At Compitalia the Lares are thus offered garlic and poppy heads instead of bloody sacrifices, after a custom begun by Junius Brutus. Also in keeping with the Numa tradition of simplicity in our rites, these offerings are placed on pottery shards, broken crockery, or else on crudely woven platters of reeds.  These are then set atop a pile of stones that have been collected at a crossroad where one street dead-ends into another (a three-way crossroads). The left hand is used to offer these platters, and the left hand is held out in prayer with the palm facing down over the offerings. Neither the offerings themselves, once dedicated, nor the altar may be touched by human hand. The right hand, in such ceremonies for the dead, is held in the gesture of the fica for protection from Genita Manua, and is wrapped in the manner used in Numa’s rite for Fides.

Children are shuttled inside at sunset, doors bolted, windows sealed, mirrors turned towards the wall or else covered with cloth so that the Lares outdoor may not see a young child and carry her away.  The children are instead urged to pass through wool puppets that hang by the front door. Each wool puppet represents a person in the house, and woolen balls are also hung to represent other household members.  Mania leads her brood of wool puppets, simulating Genita Manua as She leads Her children, the Lares. The face of Mania is carved into the gnarly roots of old trees, charred black, and dressed with dark, soiled rags. Sometimes we would carve her into an apple, allowing it to dry and shrivel into the face of an old woman, or else fashioned her in other ways. But always the Mania was used to scare the children as they passed among the puppets. In this way the fears and illness of children are left behind in the puppets, while they are brought to safety behind closed doors. Throughout the night, as the Lares compitales pass, stopping to receive their offerings, they also take away the ills and disease that were caught up in the wool puppets.  At Compitalia we honor our deceased neighbors, join in festivities with our new neighbors, provide pious worship for the Gods, and perform a purification ritual and healing ritual for the household and our children. 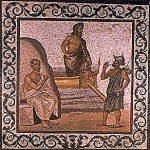 January 28, 2013 CARMENTALIA: The Women's Festival
Recent Comments
0 | Leave a Comment
Browse Our Archives
get the latest from
Pagan
Sign up for our newsletter
POPULAR AT PATHEOS Pagan
1