When Was Jesus Born? Certainly Not On Christmas

Jesus’ birthday is not on Christmas! 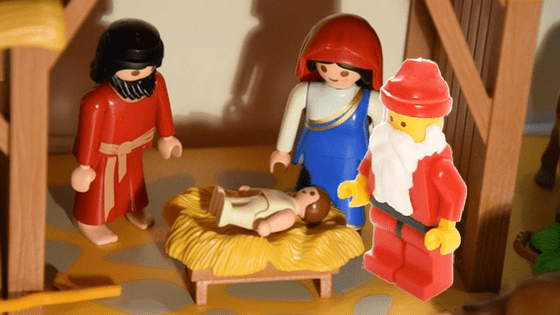 Contrary to what we’ve been led to believe, Jesus was not born during the year 1 BCE (Before the Common Era; equivalent to BC) on December 25. His exact birth date is actually unknown.

However, the Bible contains sufficient clues to show it occurred during the fall of 5 BCE… give or take a couple of years.

People today who demand a more accurate date to celebrate his birth might choose the Fall Equinox which occurs annually around September 21.

On the other hand, spending all that cash we don’t have at Christmas time is so massive that abandoning it entirely might trigger an economic depression.

In the distant past, many cultures didn’t recognize the four seasons as we do today. They, instead, divided the year into two parts: a warm season and a cold season. The transition from warm to cold occurred in late December at the Winter Solstice. This is when the number of daylight hours stopped shortening each day and, once more, started to lengthen.

This may, to some, sound counter-intuitive. However, by December of each year, the amount of sunlight had been lessening for months. It takes many months of increased sunlight to warm up the surface temperature of the Earth and the oceans once more.

The tilt of the Earth’s axis is the original “reason for the season,” for the simple reason that it’s the Earth’s tilt that is the cause of the seasons. The tilt varies between 22.1 and 24.5 degrees on an approximately 400 century or 40 millennia cycle and is currently about 23.4 degrees. This causes the Northern Hemisphere to receive maximum light and heat from the Sun about June 21 and a minimum about December 21.

On the flip side, the dates in the Southern Hemisphere are reversed. People in ancient times didn’t have access to accurate methods of counting minutes and so they were unable to determine exactly when the Winter Solstice happened each year.

Today, scientists can calculate the date and time to the nearest minute.

In ancient times it often took until December 25 of each year before observers were able to detect that daylight hours were, once more, increasing. Many cultures adopted that date as the start of the warm season. This, in turn, led many pagan religions to the belief that their gods were born on or about December 25.

The Roman god Saturn was associated with a major religious festival, Saturnalia, which ran from December 17 through December 23. It was a time when normal rules of conduct were reversed. Slaves wore the caps of former slaves who had been released from bondage, Slave owners served food to their slaves. Some people danced naked in the streets. Gifts were exchanged. Drunkenness became the new normal.

“Macrobius (5th century AD) presents an interpretation of the Saturnalia as a festival of light leading to the winter solstice. The renewal of light and the coming of the new year was celebrated in the later Roman Empire at the ‘Dies Natalis of Sol Invictus,’ the ‘Birthday of the Unconquerable Sun,’ on December 25.”

The Christian Church later adopted December 25 as the birth day of Jesus. They found it much simpler to change the focus of a traditional pagan holiday than to create a brand new holiday and try to promote it to their followers from scratch.

In ancient times, the solstice was a time of great anxiety, joy, and importance. People were anxious because they didn’t know what caused the seasons. As the day approached, they were afraid that the daylight hours might continue to decrease until the sunlight disappeared altogether. If that happened, they would starve because they would not have the ability to grow food and feed for themselves and their animals during the next year.

It was a time of great joy because, on that day, they had evidence that the warm season would be returning once more and they would avoid devastation.

It was important because many religions adopted that day as the birth day of their deity, including Christianity.

It still remains a time of anxiety, joy and importance today because many families spend excessively at Christmas time and exhaust their budgets.

It remains a time of joy to conservative Christians today, many of whom believe that only belief in Jesus offers them salvation and prevents them from spending eternity in Hell. Almost all Christians consider Jesus to be the Son of God who brought the gospel to humanity.

It is also a joyful time for those who look forward to family interactions at Christmas, and gifts from Santa.

Wiccans and other Neopagans celebrate the Winter Solstice as one of their eight sabbats (seasonal days of celebration).

Thousands of people gather at a the Newgrange tomb in Ireland — which dates from about 3200 BCE — to observe the sunrise.

Thousands also gather at Stonehenge in England (built around 2500 BCE) to observe the sunset.

Robinson B. Religious Tolerance. Controversy over the use of the CE/BCE and AD/BC dating notations. At www.religioustolerance.org/bce.htm

Robinson B. 2015. Patheos. Who Was Jesus? The No Nonsense Guide To The King
Of Kings. At: http://www.patheos.com/blogs/religioustolerance/2017/12/jesus-no-nonsense-guide

December 18, 2017
Gender Identification: Are Transgender People A Mistake By God?
Next Post

December 26, 2017 Original Sin Is Actually A Form Of Scapegoating
Recent Comments
0 | Leave a Comment
Browse Our Archives
Follow Us!