It is not unusual for universities to house a think-tank or two.  A think-tank is  an academic unit committed to research and the proliferation of that research. Some of the most well-known think-tanks include Stanford University’s Hoover Institution and Rice University’s Baker Institute for Public Policy. They often host lectures, symposia, discussions, debates, etc. in which resident scholars and/visiting researchers participate.  Unlike other academic units of the university, think-tanks do not offer degrees or even classes, though most if not all of their researchers hold faculty appointments at the home institution or elsewhere.

A little over a year ago Liberty University founded a think-tank named The Falkirk Center for Law & Liberty.  “Falkirk” comes from the “Fal” in “Jerry Falwell, Jr.”, the recently retired Liberty president, and the “Kirk” in Charlie Kirk, founder and president of Turning Point U.S.A.   Falwell resigned from his post in August 2020 under a cloud of controversy arising from alleged moral transgressions he had committed with the cooperation of his wife. Kirk, aged 27, is a conservative online celebrity known for his brash and combative manner. (Rod Dreher’s recent post on Kirk is enlightening in this regard).  Both Falwell and Kirk supported Donald Trump in 2016 and 2020. 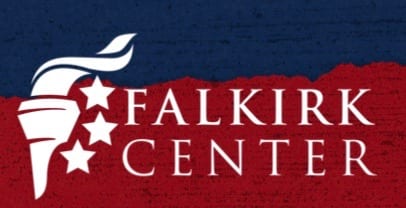 The “Why Falkirk” page on their website says, “Bemoaning the rise of leftism is no longer enough. Although we do, as Jesus taught, turn the other cheek in our personal relationships, we cannot abdicate our responsibilities on the cultural battlefield.” We believe this is wrong and dangerous. The student body at Liberty believes that the church — the “Bride of Christ” — is to turn the other cheek not only in our personal relationships, but in every aspect of life. The mission for the Church is not to wage war on the “cultural battlefield”, but to make disciples and to build one another up. We feel that the Falkirk Center’s statements present Liberty University as a school that is raising champions for culture, not champions for Christ.

Although I am in sympathy with the ends of this petition–the dissolving of the Falkirk Center–I think it is a mistake for its authors to separate cultural concerns from disciple making.  After all, a society in which authentic faith is pervasive and lived out among the populace is much easier to sustain when a society’s cultural conditions–shaped as they are by healthy political and civic institutions–make it easier for a life of charity and holiness to be practiced.  You can no more separate faith from culture than you can separate music from measure. There is, of course, no doubt that the petition’s authors are right in calling our attention to the Falkirk Center’s crude and nakedly partisan presentation of the Christian calling. But one should not throw out the baby with the bathwater.  Falkirk’s inept and misguided mission statement is a good example of how not to think about faith and culture.  It should prompt us to do it better and with conscientious care.

Elsewhere the petition states: “We at Liberty believe that Christians have a higher calling than politics. We believe that our goal is to make disciples and to encourage each other, building each other up.”  Now replace “politics” with “chemistry.” Would the petition writers suggest that Liberty eliminate the chemistry department since absolutely speaking making disciples is a higher calling than teaching chemistry?  I don’t mean to be overly critical, but it would have been wiser for the students to have said something like this: “Politics should not distort the primary mission of a Christian university. We should be on guard against the temptation to lionize any political figure or movement–whether on the right or on the left–at the expense of propagating the Gospel.”

In another place the petition tries to draw a wedge between the Christian faith and western civilization (which the Falkirk Center claims to champion): “We believe that the church is `built on the foundation of the apostles and the prophets’ (Eph. 2:20), not on western civilization. Everything people need to know for salvation has been given to us from the apostles and prophets, not from contemporary political issues that the Falkirk Center promotes.”

But the ideas embedded in these claims–the belief that church and state have separate jurisdictions, that political institutions cannot save one’s soul, that there are truths that cannot be revealed by natural reason alone–are part of the very inheritance of western civilization.  What’s more, the creedal infrastructure of the Christian faith–Niceno-Constantinopolitan Creed—would not have been possible without the Church appropriating the categories and concepts of Greek philosophy.  What the students should have said is something like this: “Although we understand the role that the Church has played in the development of western civilization and vice versa, the Church is not identical with it.” They seem to think that Christianity’s veracity is not wedded to its historical, cultural, and philosophical roots and subsequent development, that it is a kind of non-particularized universal faith that would spoil if touched by the vicissitudes of time, place, and circumstance.  But the Gospel says otherwise:  “[T]he Word was made flesh and dwelt among us” (Jn 1:14).  “But when the fullness of time had come, God sent his Son, born of a woman, born under the law” (Ga 4:4). (emphases added).

Nevertheless, I feel very bad for these students.  Their hearts are in the right place, and their cause is just. What the outside world does not realize is that these students live a dichotomous existence.  Most of them come to Liberty because they are academically serious and attracted to the school’s Christian mission, and while in the classroom they encounter bright, learned, and accomplished professors (some of whom are my friends). But when they enter social media they see their institution represented by the academic equivalent of carnival barkers. Here I am thinking not only of Falwell and Kirk, but also  Eric Metaxas, a named fellow of the Falkirk Center, whose recent public actions and pronouncements would be enough for any serious Christian university to show him the door. (See here, here, and here). The Liberty board of trustees should act swiftly to dissolve the Falkirk Center, if for no other reason than to spare these students further embarrassment and shame.

Update 1: On Facebook, Falkirk fellow and Trump attorney, Jenna Ellis, challenged my account of the origin of the name “Falkirk,” telling me that “you are incorrect that the name is from Falwell and Kirk.” In reply, I refer the reader to an interview with Kirk and Falwell in which the latter says that the think-tank’s name is both a play on the name of the great battle in the war for Scottish Independence as well as a play on the founders’ surnames.  You can view the video here. It begins at :37 and lasts about 25 seconds.

Update 2:  A former Liberty faculty member brought to my attention that the local newspaper that covered the story of the think-tank’s founding states: “The nonprofit Falkirk Center, which is named after its co-founders, will operate as a wholly-owned subsidiary of Liberty University and will be based in Lynchburg.”]

Catholic
It's unwise to publicly comment about who is...
Return to Rome
TRENDING AT PATHEOS Catholic