Why Your Church Should NOT Celebrate Independence Day

I really do. I am proud to live in the “land of the free and the home of the brave”. I have been to a number of other countries and in my humble opinion, none compare to the United States of America. I also see no problem with being a Christian and having a healthy sense of national pride.

But there is a big problem when the two get intertwined.

Our primary allegiance is to the Kingdom of God and that Kingdom includes every nation, tribe, ethnicity, faith, creed, color, and tongue. In the Kingdom of God, all of our “tribal distinctives” fall to the wayside. As the Apostle Paul so clearly points out in his letter to the church at Ephesus, in Christ there is no slave or free, Jew or Greek, American or Australian, black or white, gay or straight, blue collar or white collar, poor or rich…. but all are one in Jesus. That doesn’t mean we loose those unique defining factors that make us who we are, but those identities become much less central to us. Our true self is rooted in our identity as partakers in the Divine Nature, being united with Jesus Christ. Our common unity and bond with one another is found in the love of God and the reality that we are all his Children created in his image.

American Christians, however, often seem to get this wrong. Instead of upholding the unity and commonality of all people as children of God, we intermingle the Kingdom of God and the Kingdom of America and soon blur them so closely together that we cannot distinguish one from the other- even though they are fundamentally different. We begin to speak of America as being “God’s Country” and begin to use religious language to describe our devotion and commitment to our nation. Out national patriotism then becomes a part of our worship of God. When this happens, we get mixed-images like these: 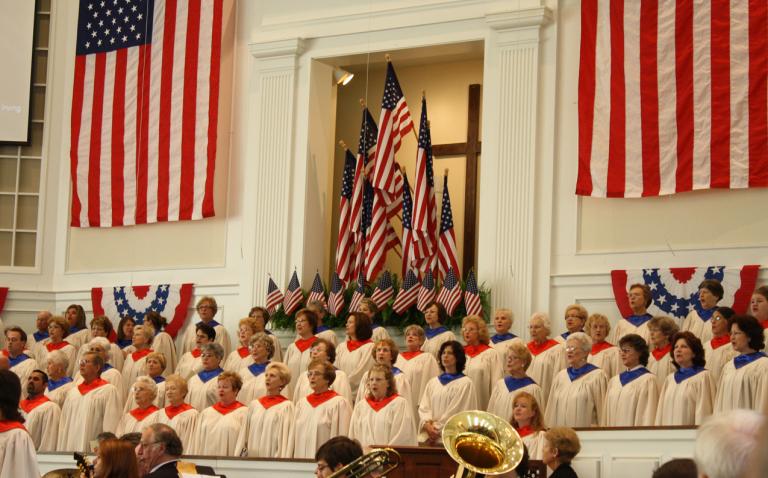 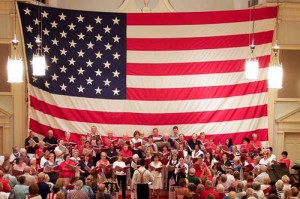 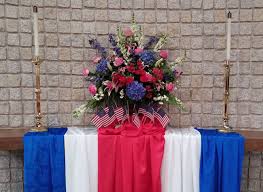 Now, if you don’t see what’s wrong with these pictures, you may have had your vision of the Kingdoms blurred.

The Church of Jesus Christ has no allegiance to any nation. Not America, Not England, Not Rome, Not Israel. No one. We are a body of people united in common faith to see the world transformed by the Gospel. However, when we as the Church allow national patriotism to enter our churches, we severely compromise the beauty and mission of Christ. We are not defined by our nationality. We are not a national entity. We are not run by the government (and most churches that celebrate Independence Day, by the way, are the ones that complain and fear government invading their churches).

And no, God does not have a special love for America.

Our hope does not rest in our freedom as Americans. Our mission is not to “bring American back to God”. America has never been “God’s Country”. We’re not a Christian nation. We were not founded upon Christianity. And the Church of Jesus Christ should have absolutely nothing to do with patriotism, nationalism, or militarism. And yet, this weekend, thousands of churches are going to be filled with people singing “God Bless America” and waving American Flags. There will be sermons preached about how America is “God’s country” and how we are called to defend our nation against the attacks of the anti-Christ homosexual agenda.

None of this is Christianity.

It’s a false religion that is formed when you mix Christianity and Patriotism. It’s essentially the religion of ancient Rome where the Caesar (or King) would be honored as a god. Instead of a single leader, in America, we honor our nation as a god. But America isn’t what we’re to be defending as Christ followers. We’re not called celebrate our nation. Instead, we are called to cast aside our national affiliations and recognize we are truly citizens of one nation under God– the Body of Christ, which is made up of every nation in on the planet.

When local churches celebrate the Independence Day they are treading in a very unchristian and idolatrous territory. I am not saying that local churches shouldn’t pray for our nation or even offer a word of thanks to God to live in our great country. Of course we should. The problem arises when we bring out the flags and play the national anthem in the House of Prayer for All Nations. It is at that point that the church is engaging in something very contrary to the Gospel of Jesus.

For in the person of Jesus, a new Kingdom has come, a new nation has been born, and new life has burst forth. In Christ, all of our identifying labels fade to the background as we embrace our new identity rooted in Jesus himself. It is that identity- child of God- that unites every person on the planet. It is that identity that has the power to overcome our deepest prejudices. It is THAT identity we should be celebrating this Sunday. Come to think of it, that’s what the Church should be celebrating every Sunday.

Jesus answered, “My Kingdom is not an earthly kingdom. If it were, my followers would fight to keep me from being handed over to the Jewish leaders. But my Kingdom is not of this world.“

July 1, 2015
A Witness to Equality: My Remarks At Washington National Cathedral
Next Post

July 21, 2015 On Being An Evangelical
Recent Comments
0 | Leave a Comment
Browse Our Archives
Related posts from Nomad