My Hope for the Pope: On Pope Francis’ Visit to the United States 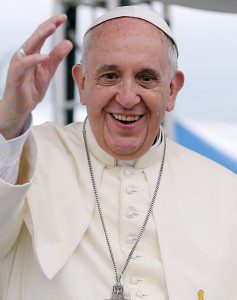 Francis is coming! Francis is coming! Living in the heart of downtown Washington D.C. its hard to go anywhere without hearing the buzz about the arrival of Pope Francis in just a few days. It’s quite stunning, when you think about it. What other religious leaders visit has inspired such responsiveness? There is something truly amazing about Pope Francis that has gripped the soul of America, and next week millions of people will turn out at various locations around D.C. to get a glimpse of this man of mythic proportions.

I too feel the excitement. For me, Francis is the first religious leader in my memory that actually deserves the title Vicar of Christ, which literally means “standing in the place of Christ” or “Christ’s earthly representative. When one looks at the ministry of Pope Francis, it’s impossible not to see the clear reflection of Jesus. Who else could enrage politicians, businessmen, and the religious hierarchy, while winning the hearts of the poor, outcast, and broken? Who else has access to unfathomable wealth and power but choses eat lunch with the homeless and pray for the diseased?

For Americans, we are at the very beginning of one of most discouraging presidential elections in recent history. The Republican frontrunner, Donald Trump, is known for his supreme arrogance and wealth. Our Democratic candidates too find themselves in the midst of ethical controversies regarding everything from email servers to their lack of ability to relate to the common citizen because of their great wealth. Beyond the elections, we are a nation in crisis, where police officers are killing a record number of people of color and middle-school students are arrested for bringing a clock to school because of their last names.

We are in crisis. And it is in the midst of this cultural climate that Pope Francis arrives, speaking the Gospel of truth to our nation. Francis has made it clear that his allegiance isn’t to the Vatican hierarchies or the agenda of the White House. He is here as the Vicar of Christ and he will speak and act as such. His messages to our nation will likely enrage many. Likewise, many will try to co-opt Francis’ message and witness for their cause. But for the majority of us, we will just be looking for a glimmer of hope, a word of truth, and for God’s sake, some Good News. We will be looking to Francis to be reminded of what our world can actually look like when we follow the cruciform way of Jesus.

Francis is coming, indeed. And as my city begins to be turned upside down in preparation for his visit, I find myself sitting here with a smile on my face and hope in my heart. It is my prayer that as the nation turns its eyes on D.C., New York, and Philadelphia to hear Francis’ proclaim the Gospel, I pray that his words would take root in our lives and bear much fruit. I pray that we would hear with clarity the unsettling truth that Francis’ is sure to bring, and respond in each of our lives with humility and abandon. And if we do, maybe just maybe we will experience the redemptive power of the Gospel in our lives, our nation, and our world. May it be so.

We must restore hope to young people, help the old, be open to the future, spread love. Be poor among the poor. We need to include the excluded and preach peace.

September 21, 2015 Exposing The Spiritual Malpractice of Southern Baptists and The Association of Certified Biblical Counselors
Recent Comments
0 | Leave a Comment
Browse Our Archives
Follow Us!

Snake-handling is unwise, but at least...
slacktivist
Related posts from Nomad