Pope Francis, Kim Davis, and a Nation In Crisis 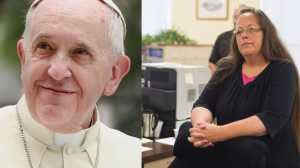 visit to the United States. I had the honor of following the Pope’s journey through Washington D.C. and up to New York City. As I traveled throughout these cities, following Francis, I encountered masses of people flocking to street corners and arenas to get a glimpse at this religious leader who seemed to inspire hope in the hearts of even the most jaded individuals. I listened closely to the Pope’s messages over the course of his visit, noting how careful he was to avoid furthering partisan divides and speak the truth regardless of who it may offend. He urged us to care for creation and to work to end global warming. He called for the global abolishment of the death penalty. He spoke of equality and inclusion of all people. He admonished us to defend religious liberty.

Before Francis’ arrived in the U.S., conservatives criticized the White House for trying to manipulate Francis’ visit to promote progressive values. At the official State Welcoming ceremony, the White House invited me and a number of other LGBTQ Christian activists, part of a guest list of over 15,000 other people who would get to attend the ceremony on the West Lawn. When the names of some LGBTQ invitees, like Bishop Gene Robinson and Vivian Taylor, were found to be on the guest list, the conservatives from the Vatican chastised the White House for trying to bring the Pope into contact with well-known “left wingers”. As one who attended the event at the White House, I can assure you that almost no one got close to Pope Francis during the ceremony. No LGBTQ leaders where photographed with the Pontiff. It appears that there was no manipulation, whatsoever. If there was, it was highly ineffective.

Earlier today, however, news broke that the U.S. Council of Catholic Bishops organized a secret meeting between the Pope and Kim Davis, the county clerk from Kentucky who has become a national celebrity among conservatives for refusing to issue marriage licenses to LGBTQ couples in her district, claiming a violation of her religious freedoms and freedom of conscience. Davis’s lawyers claim that she was brought into a meeting with Francis at the Vatican Embassy in Washington, and was personally thanked by the Pope for her “courage”. The Pope then, apparently, presented Davis and her husband with rosaries and promised that he would pray for them. The story was told in such a way to paint Pope Francis as a sympathetic supporter of Davis and an opponent of those of us in the Church and society who are arguing for LGBTQ equality.

Now, I am no Vatican insider, but from everything I can tell from watching Pope Francis, this doesn’t seem like a situation that he would willingly walk into on his own accord. A colleague of mine who is a leading Catholic commentator and scholar said that he could “see the USCCB’s fingerprints all over this.” In other words, the conservative leaders in the Council of Bishops likely conspired with other conservative organizations to get Davis a quick, unplanned meeting with the Pope in order to create the illusion that Francis was sympathetic to her plight and supported her refusal to grant civil rights to LGBTQ couples in her county. While I am under no illusion that Francis supports same-sex marriage, I am also confident that he would support the civil rights and equal treatment under the law for all citizens. I would bet that Pope Francis’ new very little about Kim Davis and her husband before he met with them, not fully understanding the complexity of her situation and story. In other words, the Pope was used and manipulated by conservative politicians and religious groups to create the appearance of sympathy and support for their agenda of inequality and oppression of LGBTQ citizens in the United States.

It’s shameful that the deep partisan divides in our nations political and religious institutions have become so severe that this level of manipulation and deception would occur at such high levels to create the illusion of support from a major religious leader. It’s not surprising. But it is shameful. This sort of behavior coming from the highest level of leadership in one of our nations most prominent Christian denominations demonstrates where the true priorities of the Church actually lay- not with proclaiming the Gospel or defending the weak and venerable, but with maintaining a position of political power. This isn’t unique to Catholics. My own people, Evangelicals, are just as, if not more guilty of such indefensible behavior.

We are facing a great crisis in our nation. One where our political wars and religious divisions are literally tearing our nation apart. Both sides of the hot button issues believe they are in the right and feel justified in doing almost anything to win. Neither side is willing to talk to their opponents, to hear another perspective, to be challenged or to learn. If this behavior continues, we will never see any progress on any of the important issues that we must address as a nation. But more than that, those of us who claim to followers of Jesus must repent of our hard-heartedness and be willing to abandon our fights for power and instead listen more closely to what the Spirit of God is speaking to us through the people who are actually effected by the issues that we’re fighting over. We cannot continue these political games, manipulating pontiffs, seducing politicians, and towing party lines. None of these actions is compatible with the way of Jesus. But when the devil takes us to the pinnacle of the temple and vows to give us the world if we would only bow down and worship, it’s hard to resist.

Christians in our nation have caved to power and principalities of our nation, and in doing so, have abandoned the power of the Spirit to bring lasting change to our world. We have given up our souls in exchange for worldly influence and forsaken the high call of Jesus to sacrifice ourselves for the good of our friends, our neighbors, and even our enemies. As long as we continue to play into the system of the world, we live as enemies of the Kingdom of God. That is precisely what those who organized this meeting between Kim Davis and Pope Francis have done. It’s also what so many progressives have done. The time has come where we must declare our allegiances. We are either standing in the cruciform way of Christ which calls us towards recompilation and embodies a radical humility and grace, or the ways of this world. If we chose the former, we will see justice roll like a river and healing flow like streams. If we chose the latter, then our future is much more bleak. We are at a pivotal moment in American political and religious history. It’s my earnest prayer that we chose our collective course of action wisely.

“Chose you this day who you will serve.”

“This is an evil, this is a sickness within our Church: sowing divisions, sowing hatred, not sowing peace.”

September 21, 2015
Exposing The Spiritual Malpractice of Southern Baptists and The Association of Certified Biblical Counselors
Next Post