Why Democrats Must Embrace Faith 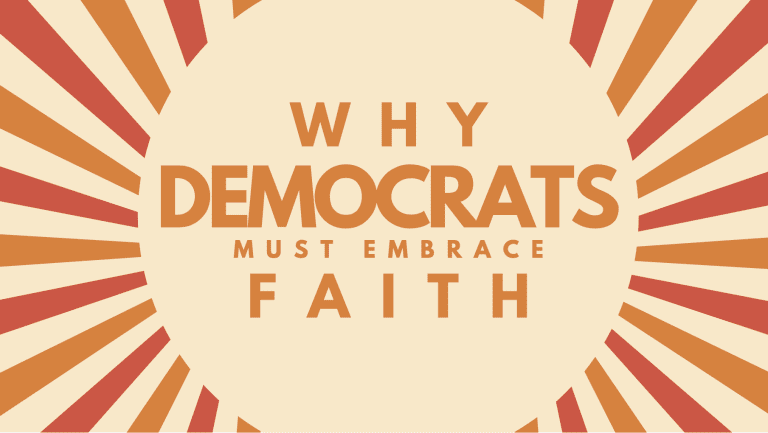 Presidential hopeful Pete Buttigieg recently called for the formation of a “religious left” during an interview on The View. Citing his own Christian faith, he pointed out that the Religious Right had adapted their own moral teaching to embrace and celebrate Donald Trump and wondered how a morally awakened religious left might impact the politics of our country in years to come.

As a pastor and political organizer, I couldn’t agree more. During the lead up to the 2016 Presidential election, I had the honor of working as a faith advisor to many candidates and campaigns. Alongside other seasoned faith organizers, we encouraged the DNC and presidential hopefuls to develop a robust strategy to reach people of faith and to be vocal about their own religious beliefs that motivated their policy positions. At times, our efforts seemed hopeful.

As I sat in a D.C. restaurant with one Presidential candidate who looked across the table and told me how much he was working to convince his campaign staff that his faith mattered to him, I thought that perhaps things were shifting. When the staffers from the DNC called me and asked me to help them organize young progressive people of faith on social media, I thought the tide would be turning.

But when the candidates finally hit the debate stage, their religious faith all but vanished. Their faith strategies never materialized. The DNC itself limited its faith outreach to a single staffer who also held two other outreach portfolios. Once again, progressives caved in to allowing the Religious Right to own the faith narrative in our country.

Days after Donald Trump was elected President, I found myself in an office in D.C. with some of the top progressive faith leaders and advisors in the country asking ourselves how this could have happened. One by one, we told of hopeful moments in our efforts to mobilize people of faith on behalf of progressive causes, and one by one, we heard stories of how the DNC and campaign officials turned down our efforts and chose to minimize faith.

In that moment, it became stunningly clear to me how short-sighted the progressive political establishment had become.

On the coasts, progressive candidates can expect that most of these progressive people will vote for them regardless of religious outreach. But in the majority of our country in between the coasts, faith really does matter, even to progressives. I, like so many Americans, am progressive because of my Christian faith- it is the values of Christ in the Gospel’s that compels me to seek the good of the marginalized. It is the ancient prophetic tradition of the Jewish people that compels me to speak truth to power and demand political change. My faith is the motivating factor of my political action. And if the Democratic party ever sought to legislate something, I found counter to the values of my faith, I would oppose it, because my faith is the ground of all that I stand for.

I am not alone. The latest Pew Survey shows that over 75% of America identifies as religious or spiritual. It is easy in our lives on the coasts to think that the secularization we see in our major urban hubs is reflective of the rest of America, but it’s not. Our country is still deeply religious, and there is no sign that this is going to change anytime in the near future. And unless progressive politicians begin to sincerely engage the religious electorate, we’re going to continue fall short of gaining the influence we need to shift the moral compass of our nation.

Progressive people of faith stand ready to organize and mobilize on behalf of candidates who express faith-rooted values and are not ashamed or afraid to be authentic about their own beliefs and spiritual lives. The Religious Right has known for decades that organized religion is the best tool for inspiring, organizing, and mobilizing their base because for millions of Americans, their faith is truly the grounding of their lives. This may look different in progressive circles, but it is none the less true. A candidate who leans on their spiritual convictions as the grounding for their social principles is compelling to most Americans. It shows that their policy positions have deep roots and are not simply pandering to gain votes or power.

America is ready for a new kind of politician- one who leans on their faith and inner convictions with authenticity, who isn’t afraid to engage communities of faith, drawing upon their own rich traditions as the fuel for their social action. Our country needs a moral awakening, and at the heart of human morality is religious conviction. Citizens on both the left and the right are yearning for a candidate of substance, for a movement that troubles the waters and provokes us to action, first within our own souls and then in our communities. America is ready for a progressive politician not afraid to lean on their faith in order to bring the transformation our country so desperately needs.

There is already a moral awakening happening in the hearts of religious progressives across this country. There are already droves of faith leaders leading the charge for justice and equity in every corner of America. What we’re lacking are political leaders who are bold and brave enough to engage and embrace people of faith as an integral part of their plan to transform this country. And until that changes, the progressive movement continue to forfeit much of our moral authority to the Religious Right.

About Rev. Brandan Robertson
Rev. Brandan Robertson serves as the Lead Pastor of Missiongathering Christian Church in San Diego, CA. A prolific writer, he is the author or contributor to eight books including “True Inclusion: Creating Communities of Radical Embrace.” Named by the Human Rights Campaignas one of the top faith-leaders leading the fight for human rights, Robertson has worked with political and social leaders around the world to end conversion therapy and promote LGBT+ rights.  Robertson received his B.A. in Pastoral Ministry and Theology from Moody Bible Institute and his Masters of Theological Studies focused on sexual and gender justice from Iliff School of Theology. You can read more about the author here.
Previous Post

Why are so many Christians such...
John Shore
Related posts from Nomad