#BlackChurch Activism in the Digital Era 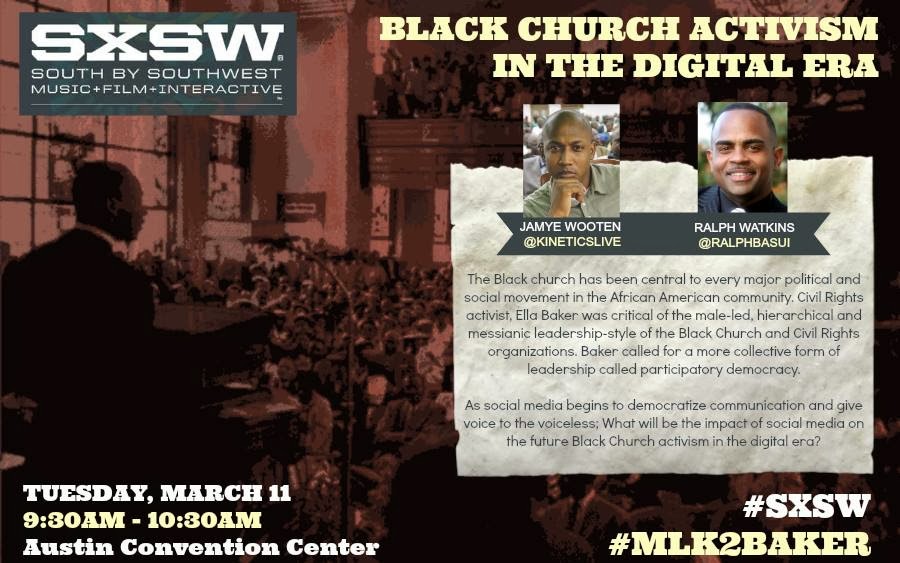 The Black church has been central to every major political and social movement in the African American community. Civil Rights activist, Ella Baker was critical of the male-led, hierarchical and messianic leadership-style of the Black Church and Civil Rights organizations. Baker called for a more collective form of leadership called participatory democracy. As social media begins to democratize communication and give voice to the voiceless; What will be the impact of social media on the future Black Church activism in the digital era?

“… a critical player on the front lines of significant changes taking place in the structure and practice of American Religion..” – Dr. R. Drew Smith/Transatlantic Roundtable on Religion and Race
Jamye Wooten is a social entrepreneur, minister of information and a faith-rooted organizer that has documented social movements from across the United States, United Kingdom and Africa.
He is the founder Kinetics Communications, LLC and publishing editor of KineticsLive.com, an information ministry that integrates theological reflection and practice, and uses dialogue as a catalyst for social change.
Most recently after returning from the Democratic Republic of the Congo, Jamye launched, “Say Yes! Break the Silence Congo Campaign”. The PSA campaign, which features leading faith leaders from around the world, amplifies the voices of women that have been raped and displaced as a result of the violence. Since 1996, an estimated 6 million have died in the Congo; the worst humanitarian crisis in the world.
Jamye is the former program director of the Collective Banking Group, Inc. (CBG), a Christian ministry that draws together leaders from the faith, business, and public service sectors to develop and enhance economic empowerment strategies for the African American community.

Ralph Watkins is associate professor of evangelism and church growth. His work focuses on building bridges between young adults and the church in order to develop future leaders for the twenty-first century church.
With over 20 years of pastoral, teaching, and administrative experience, Watkins is an active teaching scholar with over 250 publications and conference presentations to his credit. He is the author of The Future of the African American Church (co-authored with Justin West) (2014), Hip-Hop Redemption: Finding God in the Rhythm and the Rhyme (2011), Leading Your African American Church Through Pastoral Transition (2010), From Jay-Z to Jesus: Reaching and Teaching Young Adults in the Black Church (co-authored with Benjamin Stephens) (2008), The Gospel Remix: Reaching the Hip Hop Generation (2007), and I Ain’t Afraid to Speak My Mind (2003). He is presently working on his new book with Eerdmans Press entitled Africana Theology: The Re-Radicalization of Black Theology. Watkins is an active blogger and his blog can be read once a week at http://ralphbasuiwatkins.blogspot.com
Dr. Watkins is the host of the television show Religion Roundtable a bi-weekly show that discusses issues of faith and social justice. His television show airs on the Atlanta Interfaith Broadcasting Network. He is also the producer / direct

or of two full length feature documentaries: She Is The Pastor (2012) and Our Journey to Palestine: A Story of the 43rd Delegation of Interfaith Peace Builders (2013). He is presently working on his new documentary Faith in Sweet Auburn to be aired on the Atlanta Interfaith Broadcasting Network in 2014.

February 28, 2014
Should Christians Take Medication for Mental Illness?
Next Post