IS “JUSTICE” AN ESSENTIAL PART OF GOD’S NATURE? 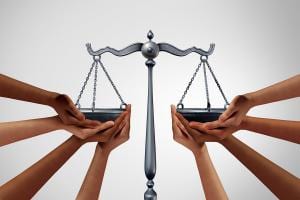 Here is a strange fact. The word “justice” appears nowhere in the King James New Testament, despite the fact that the word is used many times in the Old Testament. While other translations occasionally translate the Greek word “dikaisyne” as “justice,” the standard translation of “dikaisyne” is “righteousness.”

Today, many demand justice from the hands of God. They want their enemies to pay for the wrong they have done. They somehow deny that what they really want is “vengeance.” They instead claim they want simple “justice,” as if that cleans up their motive. Rather than technically taking their own revenge, they just pray for God to lower the proverbial boom and destroy their enemies. God can do this either through natural or supernatural means. It matters not to those seeking so called “justice.” They crave GOD’S WRATH to execute GOD’S JUSTICE (at least what they consider to be the justice of God).

The problem with “justice” is that it endlessly slides up and down the scale of “deserve.” Somebody claims somebody DESERVES something. My enemies DESERVE to be punished. They DESERVE justice’s penalty. I DESERVE justice’s reward. I DESERVE to be compensated because of a wrong done to me. I DESERVE this. They DESERVE that. The troubling part is that “deserve” doesn’t appear to be a legitimate word in God’s New Testament Kingdom of Grace. In God’s economy, all is freely given without regard to merit. The “deserving” dynamic that “justice” appears to require is nowhere to be seen in the New Testament. This may be why the word “justice” is prevalent in the Old Testament, but appears nowhere in the New Testament, at least the King James version.

So, if the English word “justice” is conspicuously ABSENT from the entire New Testament’s most popular Bible translation, shouldn’t we then question the role of justice in the New Covenant? Is the Greek word translated “righteous” ever to be considered synonymous in the New Testament with “justice?”

At the outset, it should be said that defining “justice” in a way all can agree on is extremely problematic. One man’s justice is another man’s injustice. In Plato’s Dialogues, the wise Socrates punches holes in all the following proposed definitions of “justice:”

“speaking the truth and repaying what one has borrowed” (331d).

“justice is rendering to each what befits him” (332b).

“Justice is nothing else than the interest of the stronger” (338c).

Socrates deconstructed theses definitions one-by-one to show how unsatisfactory they all were. These definitions simply cannot withstand the challenge of new times and the power of critical thinking. Socrates refuted them all by presenting counterexamples. For instance, if we tacitly agree that justice is related to goodness, to return a weapon that was borrowed from someone who, although once sane, has turned into a madman does not seem to be just but involves a danger of harm to both sides.

Moreover, all the proposed definitions ultimately involve harming someone who acts unjustly, to which Socrates replies: “it cannot be just to harm anyone, because justice cannot produce injustice” (335a). In World War II, Hitler was the first to bomb civilian cities on a limited basis, but then Churchill retaliated by bombing civilian cities on a widespread and continual basis. Eventually, the United States dropped atomic bombs on two different cities—– thereby killing, maiming, deforming and/or irradiating hundreds of thousand of women and children. Was this justice? It seems that, sooner or later, all proposed definitions of “justice” stand on “the eye for an eye” concept, a concept Jesus definitely trumped as obsolete and no longer viable under the New Covenant. Matthew 5:38-39.

So, if the English word “justice” is conspicuously ABSENT from the entire New Testament’s most popular Bible translation, shouldn’t we then question the role of justice in the New Covenant? Is the Greek word translated “righteous” ever to be considered synonymous in the New Testament with “justice?”

Did Jesus reveal justice as an essential attribute of His Father? If His life tells us anything, it reveals Jesus as a victim of INJUSTICE. What He suffered He did not deserve. He was innocent by ANY reckoning of justice. And yet, at His most abused and victimized moment, He declares the following: “Forgive them Father, for they know not what they do!” That is not justice. That is mercy. That is grace. That is love.

Matthew 5:48, and the preceding ten verses establish that God the Father’s perfection lies in this: He always overcomes evil one way and one way only— with goodness. He always blesses His enemies to overcome their evil. He endlessly turns the other cheek, walks the extra mile, gives the extra cloak, etc. And Jesus tells us to always do the same, to “be perfect as our Father in heaven is perfect.”

Now, what Jesus modeled for us and commanded to us is NOT justice by any human definition. Rather, it appears quite unjust on it’s face. Jesus commands grace, not justice. THE GRACE OF GOD OFFENDS THE JUSTICE OF MAN.

We must believe that God’s way of disallowing evil is SOLELY through the Cross. Jesus did not return evil for evil. He did not become evil to stop evil. He did not dispense justice by becoming unjust Himself. Rather, He absorbed ALL our evil upon Himself, without judging us, without revenge or retaliation toward us, and without wrath returned to us. What justice is their in that? We end up NOT getting what we so richly deserve. Praise God, mercy triumphs over justice and judgment.

“For he shall have judgment without mercy, that hath shewed no mercy; and mercy rejoices AGAINST judgment.” James 2:13.

The Greek word translated as “rejoices against” in the above passage is κατακαυχάομαi and means “to exult against (i.e. over):–boast (against), glory, rejoice against, to glory against, to exult over, to boast one’s self to the injury (of a person or thing).”

The bottom line is that we all need to drop our human notions and demands for justice outside the door of our hearts. What we call justice is usually just a veiled motive of “eye for an eye” revenge. Am I saying God does NOT want us living uprightly? Of course not. Am I saying God doesn’t rejoice when He sees us treat each other fairly and honorably? Of course not. Am I saying that evil sowing doesn’t beget evil Satanic reaping of oppressions and destructions galore? No, of course not. Am I saying that the government’s rules of “justice” never provide a useful function to society? Certainly not. But, what I am saying is that God does not operate a tic-for-tac system of justice based on any human notion of “just desserts.”

There IS a crooked cosmic cop looking to bust us for every single transgression, but it’s not Christ. It’s Satan, “the ACCUSER of the brethren,” who prosecutes us “day and night.” Revelation 12:10. What does he use to prosecute us? Our carnal notions of justice and revenge— the Dead Letter of the Law in other words. This is why the letter of the law “kills” (2 Corinthians 3:6), because it forbids and excludes mercy. Satan is behind every earthly condemnation and accusation. He is also behind our every merciless impulse and response. God, on the other hand, is behind our every impulse to forgive and turn the other cheek, to bless our enemies rather than to curse them, and to help rather than than to hinder them.

So, what does the word “righteousness” mean if it doesn’t mean earthly “justice?” Paul tells us in Romans 4:3 and 5, “Abraham believed God, and it was counted to him for righteousness… Faith is counted for righteousness.” Do you see? It is not what we DO that defines justice in God’s eyes, but rather on whom we BELIEVE. The former is living under the Law, while the later is living under Grace. Simply put, faith in Christ is the only justice we perform. “Whatever is not from faith is sin,” and thereby unjust. Romans 14:23.

So, what about God’s nature? Is justice an essential part of His nature? The New Testament does NOT say God IS justice, but it does say God IS love. 1 John 4:8. Love, then, is the essential ground of His being. He certainly IS just, but that justness serves His love. God is certainly fair, but He is much more than just fair. By all human standards, He INFINITELY MORE THAN FAIR. His “over-fairness” (by our standards of justice) should indicate to us that His justice is very different than ours. It is grounded on grace, faith, love, mercy, patience and restoration. These are the qualities that, as John Cougar Mellencamp sings,”Help a man grow tall!”

September 7, 2019
The One Thing Jesus said to Never Forget
Next Post