On Becoming our Authentic Selves

“Now, with God’s help, I shall become myself.” ―Søren Kierkegaard 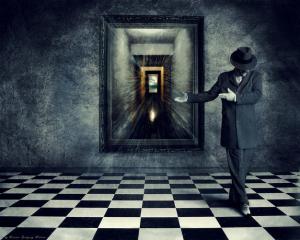 Jesus, after we each allow Him to introduce Himself into our lives, next introduces us to the true image of His Father. These introductions are each made to us by and though His Holy Spirit. The last introduction Jesus makes is to the final personage whom we all need to meet anew and afresh—ourselves. Our real selves. Our best and brightest selves. Our divine selves, within whom the Father has imbedded His own Son’s image. Our deepest and highest selves.

As Michelangelo said, “The statue lies within the stone.” In other words, the stone needs to be “cured” by chipping away all obstructions that hide the manifestation of the masterpiece. We too, each of us and all of us, have obstructive rocks husking and hindering our true selves from fully surfacing. Jesus even spoke of these rocks in His master parable of the sower, rocks which keep us from finding “the depth of soil” (and soul) within us.

Jesus didn’t teach that we were all sinful wretches in need of punishment. Rather, He taught that we were His wounded siblings, children of His Father, in need of rescue and restoration.

We do live in a fractured creation. You surely wouldn’t listen to a doctor who told you that your leg was perfectly healthy when, in fact, you yourself could see bone breaking out of the skin. Nor should you listen to anybody who claims all men are born perfect in a creation which is also perfect when, in fact, the broken lives of a broken creation surround us. As G.K. Chesterton said, “We are all seasick, and we are all in the same boat.” When I was young I sought to deny this truth. But age has confirmed it to in me a thousand different ways.

As a criminal defense attorney of 28 years, I see the cracks everyday and in most every way. Emerson said that, “Man is a god in ruins.” So true. In my job, I have seen (in myself and others) so many of the fractured ruins, but I have also seen the residual divine image which exists deep in all of us.

Regardless of what ivory tower idealism tries to tell us, neither these vicious wolves or self-loathing lambs described above are born perfect, without flaw or fracture. Those on the legal and medical battle-lines of human nature know better. We all like sheep have indeed gone astray from WHO we really are and WHAT we can really do.

But here is the good news. Jesus came to both set and heal our fractured states of being. These words below were the first of His public ministry:

“The Spirit  of the Lord  is upon  me , because  He has anointed  me  to preach the gospel  to the poor  ; He has sent  me  to heal  the brokenhearted,   to preach  deliverance  to the captives , and  recovering of sight  to the blind , to set  at  liberty  those who are bruised ,   To preach  the acceptable  year  of the Lord . . . . This  day  is  this scripture  fulfilled  in  your  ears.” Luke 4:18-21. The Pharisees denied that they were sick and stayed unhealed. The desperate, by contrast,  admitted their brokenness and received the curative energies of God.

Jesus’ above mission statement declaring His purpose as preaching deliverance to the captives, recovering of sight to the blind, and curative liberty to the bruised is just as important to us today as it was to the ancient world. Jesus didn’t come to show us things were just fine the way they were, but rather that they weren’t. He came to make all things new, not to affirm the status quo.

Jesus cures all things in their proper order, FIRST He (along with our consent and cooperation) heals HIS CREATION WITHIN US, so that we can THEN be His agents of healing to HIS CREATION WITHOUT US.

October 19, 2019
"Gnosticism”— a Rhetorical Term which has Come to Mean “Everything” and “Nothing”
Next Post

May the circles be unbroken
slacktivist
Related posts from Richard Murray