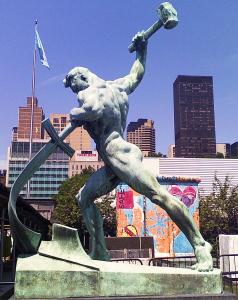 Here is an interesting fact. Ancient Hebrew makes no grammatical distinction between an entity actively “causing” and passively “allowing” evil (if that entity was in a position of power and availability to attempt to stop it). They are one in the same. To allow something which we have the power to stop makes us a party to causing it. Theological mindsets from such diverse camps Martin Luther King, Jr. and John Calvin agree. Their very different systems of thought were predicated on their being no difference between causing and allowing.

Martin Luther King’s entire philosophy of non-violence was built on debunking this pseudo-distinction between actively causing and passively permitting. “He who passively accepts evil is as much involved in it as he who helps to perpetuate it. He who accepts evil without protesting against it is really co-operating with it. ” Martin Luther King, Jr. p 97, The Westminster Collection of Christian Quotations, Westminster John Knox Press, (2001).

Similarly, John Calvin was intellectually honest enough to admit that, under his view of God’s absolute sovereignty, since God’s specific permission is needed for any evil act to first occur, then God becomes the ordaining cause of all events, both good and evil. “God’s permissions ARE His purposes” Calvinism famously teaches.

Calvin WAS frank enough to admit that there was no difference in his theology between God causing evil and God allowing evil. Again, God’s “permissions ARE His purposes.” God puts His necessary STAMP OF APPROVAL on EVERY SINGLE rape, molestation, murder, disaster, war, cancer, amputation, famine, plague and horror which ever befalls us. As Calvin said, “All events take place by God’s sovereign appointment.” Institutes, III, 23, 6.

This pseudo distinction has always saddened my heart. And it’s a common “cop out” we use to excuse God for being morally culpable for the evil done by humans and angels when we claim— “God allowed it to happen but didn’t cause it to happen.” I am convinced this is the mother of all misapprehensions when it comes to forming a coherent theodicy (the justification of God’s goodness and powers in a world where evil is commonplace).

Let me use a thought experiment to help explain this dynamic. Let’s imagine that a recently found lost ancient document presented a story where Jesus, during His incarnation, walked upon a young child being raped in the streets by drunk Roman soldiers, and then describing Jesus passing by and doing nothing to stop it. Perhaps the thought experiment even has Jesus saying to the child in passing, “I love you child and promise that this rape you are now suffering is for my glory and I will uses it as a sculpting tool to make you better. Take care, I must be off now.”

But we intuitively know any of the three options is impossible. Jesus would have stopped this, or any other, rape from happening in His immediate sphere of influence. We wouldn’t ever DARE say, “Well Jesus, even though He had limitless supernatural wisdom and limitless supernatural resources to intervene, nonetheless didn’t interfere with the rapists’ actions because of the specific good that He sees He can accomplish through that particular act for the benefit of that particular victim, that little innocent child. This is really good for the child because Jesus knows it will somehow teach her to repent and rely more on the Lord in the future. Jesus sure knew what He was doing. He certainly didn’t approve of the rape, but I grant you He ordained and allowed it. But it’s not the same thing, at all. It’s entirely different.”

Nobody would make the feeble claim that “causing” and “allowing” were two entirely different concepts. We wouldn’t try to comfort the child’s parents with the silly explanation that a God who claimed to be good, but who passed by and did nothing to help their child, wasn’t fully and morally culpable in not stopping their child from being raped when HE WAS RIGHT THERE WITH A LEGION OF ANGELS OVER HIS SHOULDER AND AT HIS BECKON CALL. Jesus, who could bowl over a troop of solders with a single spoken word, would nonetheless stay mute in the face of this disaster happening right before His eyes. We would not dare claim that Jesus didn’t consent and contribute to the child rape by simply “walking on by.”

We would instead say that story CAN’T be true because Jesus would then have a been an approver or contributor to that monstrous evil. Jesus in the Gospels moved as a man inhabited with the fullness of divinity. Today, Jesus moves through humanity as His vessels.

We would instead be horrified and finally admit that, with an omnipotent and omniscient God whose presence walks by all the evil occurrences on the earth every day, that there is NO difference between allowing and causing. We would conclude that that document must be false, that it portrayed a false Jesus, and that the Jesus we know would never have passed by without intervening.

In short, we would reject the Jesus proposed by that ancient document as false and inauthentic. And yet, sadly, what we would never believe of Jesus, we so easily and casually believe of the Father.

So here is the conceptual key. Within the divine nature of God, “can’t” and “won’t” merge into the same thing. Scripture says it is “impossible” (Titus 1:2) for God to lie. Yet, how can this be?

Doesn’t God have the innate freedom to lie if He wanted to? He is all-powerful, after all. Doesn’t that give Him the right, the power, the authority, the capability to lie whenever, wherever, and to whomever He wanted to?

Even if we are just talking hypothetically, couldn’t God tell a big fat whopping lie if He decided to? …..No way. Not if the Scriptures are true which say it is IMPOSSIBLE for God to lie. So how can this be? What is the dynamic going on here?

Well, there is only one workable explanation. If God won’t do something, then He can’t. “Won’t” and “can’t” mean the exact same thing to Him. The Lord is so purified in perfect purpose, so lavished in loving light, and so constant in character, that HE “WILL NOT” AND “CANNOT” VIOLATE HIS OWN NATURE—— NEVER—– EVER.

This distinction is not mere semantics. We, as humans, all frequently lie to varying degrees, to ourselves, to others, to God, by both omission or commission, by exaggeration, minimalization or distortion. Let God be true and every man a liar. Romans 3:4.

As opposed to God, OUR “won’t” and “can’t” does mean two entirely different things. We CAN lie at any time and place, and we often DO. Sometimes we WON’T and DON’T lie in particular situations, but if enough added pressure were applied, we certainly COULD at the drop of a hat.

But, God’s perfect character has rendered sin “impossible” for Him. His nature has transcended beyond sin as even a hypothetical possibility. Jesus proved that by remaining sinless on the earth, sinless as He harrowed Hell, and sinless as He ascended to Heaven.

We too will ultimately achieve the same state of sinless perfection where our “won’t” merges with our “can’t.” We “won’t” sin because we “can’t” sin. This is what the end of our faith walk is all about. This is the sanctifying work of the Spirit which Jesus said grows and grows and grows from within us until our “whole” being is “leavened” with the Kingdom of God. Luke 13:21.

And this dynamic just doesnt apply to lying. It also explains why God doesn’t EVER coerce, kill, maim, oppress, afflict or act in ANY other unworthy way toward us. It simply is not in His nature. He won’t do it because He can’t do it. He can’t do it because He won’t do it. The words mean the same thing BECAUSE God’s will and God’s nature are both flawlessly unified and seamlessly weaved in purity and perfection.

As Anselm says, God is omnipotent only within the context of His character. He IS all-powerfully good, compassionate, heroic and merciful BECAUSE this is the core nature of light and love Jesus reveals. But, He is NOT all-powerfully wrathful, violent, cruel and hateful BECAUSE He can’t and won’t operate in these toxic and unworthy motives and purposes.

Once we understand the “won’t” and “can’t” of God in a clear way, we are now ready to understand the “can” and “will” of God’s goodness. “Can” and “will” also mean the exact same thing to God. God ALWAYS hastens to “will and to do” the highest available good which our corporate and individual faith levels “recognize, receive, and release.”