Whatever Happened to Stoning? 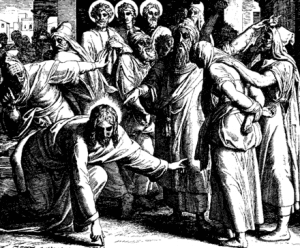 If you are a Bible literalist, then you have to believe Jesus did a pretty poor job “fulfilling the law” when it comes to stonings. What happened to “the every jot and tittle of the law being fulfilled?”

Jesus never endorsed stonings of any kind. In fact, He de-endorsed them. He prevented the woman caught in adultery from being stoned. He specifically told her He didn’t condemn her. He also protected his corn-shucking disciples from being surely executed under the Law for violating the Sabbath by calling Himself “the Lord of the Sabbath.” He never once authorized or endorsed anybody dying for the breaking of the Law.

Today those we call “stoners” are relatively gentle and harmless. They go a little heavy on the weed and thereafter remain happily placated and peaceful, albeit somewhat dazed and lethargic.

But, in the Bible, “stoners” are anything but gentle, harmless and lethargic. “Stoners” are the religious people who energetically and mercilessly stone sinners to death.

Disobedient children, adulterers, and Sabbath-breakers would all be stoned this very moment if Old Testament literalists had their way. Why? Because the Old Testament commands these violations of the law to be death penalized, no exceptions.

This prospect is made all the more dire when Jesus tells us that whoever lusts after another woman commits adultery in the heart. Who couldn’t be stoned under that measure of sin? And which of us have not violated the Sabbath at some point in our lives. And which of us haven’t brazenly dishonored and disobeyed our parents before?

And yet, I ask you. Did Jesus during His earthly ministry stand idly by and let disobedient children, adulterers and Sabbath breakers be killed by the stoners of the day? After all, He came to fulfill every jot and tittle of the Law didn’t He? Why wouldn’t He pick up a rock and join in on the fun?

Well, not only did Jesus famously stop the stoning of the woman caught in adultery, He specifically told her He did NOT condemn her for her sin. He first rescued her from homicidal religious judgment, then assured her He didn’t condemn  her, and only then did He exhort to go forth and sin no more.

And she was the only one Jesus saved from stoning. He defended His own guilty disciples regarding their Sabbath breaking by harvesting corn because they were hungry.  “The Sabbath was made for man and not man for the Sabbath,” Jesus declared. And David did it, He went on, so why can’t my disciples do it?

The point is this. God is not a stoner! Satan certainly is, as he accuses the brethren day and night!  We certainly are as well, at least when infected by religious devils! But Jesus doesn’t smoke the weed of wrath and condemnation. He only smokes the peace pipe of love, mercy, healing and forgiveness. And we need to praise God He doesn’t, or all of us would be getting stoned to death as we speak.

The stoners of today may no longer pick up literal rocks, but they continue to pick up jagged verbal rocks or mental rocks and hurl away killing thoughts at those they judge as sinners. Don’t be a religious stoner. He who smokes the weed of wrath often becomes brimstoned with fundamentalism.