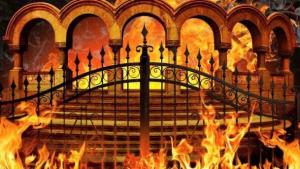 “I will build my church and the gates of Hell will not prevail against it.”– Jesus in Matthew 16:18.

Below are six short allegorical possibilities from Scripture that we can apply to better understand the nature of God’s judgment and the nature of “the gates of Hell.” (See the comment section below for a discussion of how Paul frequently Christo-allegorized Old Testament narrative imagery to help us better understand New Testament dynamics, just as Jesus employed parables in the Gospels).

1)JONAH AND THE WHALE: Jonah in the belly of a whale (Jonah 2:1-10) was used by Jesus as a type and shadow of being in Hell for three days. Matt. 12: 39-40. Jonah believed he had been in the belly “forever” (v. 6) when in fact it had only been three days. Jonah in fact called the whale’s belly the “belly of Hell” (v. 2). Thus, Jesus and Jonah both referred to it as a type of Hell, yet it was not in fact eternal. From Jonah’s viewpoint, it certainly seemed eternal and hopeless, yet God was working repentance in Jonah’s heart during this three days in Hell. For Jesus it was different. Even though he suffered infinitely intense torment over His three days in Hell, He was aware of something the hopeless Jonah did not have the faith to know: “Therefore did my heart rejoice, and my tongue was glad; moreover also my flesh shall rest in hope: Because thou wilt not leave my soul in Hell, neither wilt thou suffer thine Holy One to see corruption.” Acts 2:26-27. Verses 29-31 confirm that this above-quoted passage is referring to Jesus’ confidence during His worst moments in Hell that the Father would not abandon Him. Perhaps this is why Jesus holds the “keys to Hell and death” (Rev. 1:18). The key out of Hell is the hope that God could never abandon His children to eternal torment. Jonah thought God would abandon him forever. Abraham thought God would abandon the rich man to eternal damnation in Luke 16:19-31. I much prefer Jesus’ hopeful attitude to their hopeless one.

2)THE JUDGMENT OF NINEVEH: Saint Jerome (347-420) said, “I know that MOST persons understand the story of Nineveh and its king, the ultimate forgiveness of the devil and all rational creatures.” Homily on Jonah. Here is a great Old Testament passage displaying the Lord’s tender posture toward all creation. In response to Jonah’s bloodthirsty desire to have Nineveh incinerated by judgment, God contrarily responded, “And should I not have pity on Nineveh, that great city, in which there are more than 120,000 persons who do not know their right hand from their left, and also much cattle?” (Jonah 4:10-11). This reminds me of something in the New Testament. “Forgive them Father for they know not what they do.” Luke 23:34. What we glean from these passages is a very simple truth about how God views sinners– they don’t know their right hand from their left, they don’t know what they are doing. So we should stop viewing them as those who DO.

3)THE GOOD SHEPHERD: Jesus, as the good shepherd, leaves the ninety-nine found sheep to find the lost one. It is hard to believe that the good shepherd goes to to all the trouble to rescue the lost sheep, only to then torture it for eternity. “What man of you, having an hundred sheep, if he lose one of them, doth not leave the ninety and nine in the wilderness, and go after that which is lost, until he find it? And when he hath found it, he layeth it on his shoulders, rejoicing.” Luke 15:4-5. This beautiful parable tells us how relentless and indefatigable is the Lord in seeking our rescue. If we extend this attitude to the postmortem realm, it’s an easy reach too see God’s wrath as restorative and His judgment as curative.

4)JUBILEE: Jubilee in the Bible (Leviticul 25:9-10) was a festival held every 50 years where all debts were forgiven, all slaves set free, all property returned, and all who had fallen were restored—- NO EXCEPTIONS! Makes me wonder what this points to in the New Testament. This wasn’t initiated by corporate repentance but by a divine decree of mercy. The Jews could have ignored the decree and continued to hold each other eternally in debt-bondage, but they chose instead to accept, publish and perform the Lord’s grace. So should we.

5)BANISHMENT: “Like water spilled on the ground, which cannot be recovered, so we must die. But that is not what God desires; rather, he devises ways so that a banished person does not remain banished from him.” 2 Sam 14:14. Amazing verse. It reveals God’s will is that we not die or suffer banishment. He is perpetually DEVISING ways for us to recognize and realize His restorative power. This is the essential heart of “the good shepherd” which leaves the flock of ninety-nine to rescue and restore one lost sheep. Abandoning exiles is simply incompatible with the revealed nature of Jesus.

6)SAMSON AND THE GAZA GATES: Samson is a wonderful Old Testament allegory which prophetically speaks of the New Testament Jesus. Both Samson and Jesus’ births were announced prophetically by angels as soon-to-be deliverers of their people. Judges 13:6; Luke 1:30-33. Samson’s exploits started the full and deliverance from Philistine oppression. Judges 13:5. Jesus’ exploits started the full and final deliverance of the sons of men from Satanic oppression. Genesis 3:15; Luke 2:30-40; Luke 4:18-19; 1 John 3:8. Samson displayed supernatural strength throughout his life by being a one man wrecking machine “stripping and spoiling” the Philistine powers of their coverings. Judges 14:19. Christ displayed Samson’s same supernatural strength when He singlehandedly “stripped and spoiled principalities and powers, making a show of them openly, triumphing over them in it.” Col. 2:15. The original words in this passage, Greek scholars tell us, describe a triumphant military ceremony portraying Jesus as “stripping” all the demonic powers of their armor and then having a victory parade showing off the spoils. This victory saw Jesus ascending out of Hell, “leading captivity captive.” Eph. 4:8-10; Matt. 16:18. Samson tore the hinges off the gates of Gaza and carried them away on his shoulders. Jdg. 16:3. Jesus tore the hinges off the enemy gates of Hades, then carried them away and discarded them at the foot of the cross, these gates nevermore able to lock anybody away from God’s love again. Matthew 16:18; Revelation 1:18.

CONCLUSION: So, after considering the above, why would we EVER limit God’s ability to rescue exiles ONLY on THIS side of death? Restoration of those in exile is an essential quality of the divine nature. Some claim Hell to be the “ultimate exile,” so why would God not perpetually devise ways for the “ultimate restoration?” After all, Jesus said the gates of Hell/Hades would not prevail against His church. This implies the gates of Hell will come off so that ALL its prisoners will be set free so that Christ may be “all-in-all”(1 Corinthians’s 15:28) and that He will “fill all things” (Ephesians 4:10.)

January 5, 2020
“C.S.I. Jerusalem: Who Murdered Ananias and Sapphira?
Next Post

January 17, 2020 “Letting” the Glory of God be Revealed
Recent Comments
0 | Leave a Comment
Browse Our Archives
get the latest from
Richard Murray
Sign up for our newsletter
POPULAR AT PATHEOS Progressive Christian
1