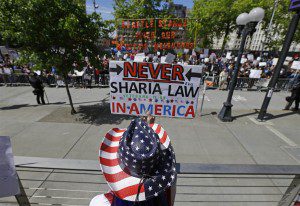 Recent Anti-Shari’a demonstrations hosted by ACT for America have shown us once again that there is a highly mobilized and extremely ignorant and fearful group of Islamophobes.

They are ever ready to sling their manhood over their shoulders, and come when their masters whistle and promise to feed them lies.

So maybe some truth is in order.

The term shari’a in Arabic has at least 5 meanings.

It is also worth nothing that within fiqh (definition 5) it is universally recognized that Muslims living in non-Muslim lands are obliged to live by local laws. So in fact it is the fiqh within shari’a that protects the US against shari’a, not inane protests.

Now both ignorance and fear are a choice, and the protestors are voluntary participants in both. So there is little to be done for them except resist them in public and keep them from hurting anyone.

But for those who wish to break free from ignorance and fear there are things we can do.

The cure for ignorance is education, and it should be more readily available. Given those who control our public school curriculum it is unlikely that ignorance about non-Christian religions will be cured there. So I’m afraid it will be up to churches and private institutions to educate the public, and up to responsible journalists to counterbalance Fox and Breitbart and their allies in promoting misunderstanding and bigotry.

And fear? It is overcome only by continual sustained contact with those we fear. So against the segregationist policy of school vouchers and segregationist nature of the real estate market our churches need to be centers of interreligious hospitality, even as we defend the diversity in our public schools.

Ignorance and fear are not the normal state of human being. They are not a natural goal for persons or societies. The natural goal of human life is knowledge and peace of heart. We need to get back on track. We need, frankly, to find the right shari’a.

July 6, 2017 Our Culture of Fear
Recent Comments
0 | Leave a Comment
Browse Our Archives
get the latest from
Best of Patheos
Sign up for our newsletter
Related posts from Robert Hunt: Interfaith Encounters