The Death of Civil Discourse or a New Civilization

The Death of Civil Discourse or a New Civilization June 1, 2017 Robert Hunt 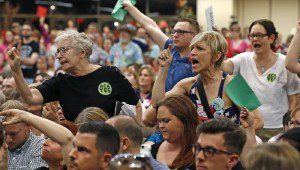 I wonder what they are really mourning.

In his book Airborne William Buckley tells a story of sailing in (I believe) the Bahamas when he comes into an anchorage where he sees the yacht of Dr. Benjamin Spock, one of his chief enemies in what he calls “the culture wars.” So of course he prepares a formal invitation to cocktails and has his son take it over on the launch. How civil.

The term “civil discourse” has its roots in the idea of civilization. Unlike barbarians, or heathen, civilized people observe decorum and ritual in their interactions with one another. They follow a neat set of conventions that grease the wheels of the social machine. They show respect for those to whom respect is due because of wealth, title, accomplishments, or old family ties. They work together to advance their common interests.

Now there are lots of civilizations, but it appears that for  Gerald Seib and the venerable Wall Street Journal the term “civil” here refers to the conventions that developed among the Anglo American elites after the Enlightenment. And these in turn drew on even more ancient ideas of manners developed in the Anglo-French world of the royal court and later classes of landed gentry.

Thus civil discourse covers everything from how to make polite cocktail conversation, to how to set a formal dinner table, to how to hold a meeting, to the rules that govern the legislature. After all, both cocktail parties and running countries were originally the privilege of the urban or landed elites that sprung from those old European nobility. (I am, of course, a fan of Robert’s Rules of Order.)

Civil discourse as it developed in the United States was the tool of the elite, the social tics by which they could signal to one another that they were not of the bumpkins, boors, rednecks, and crackers. It spread to the middle class by the great American institution of a university education, embedding youth in an institution every bit as ritualistic, feudal, and self-important in its forms of discourse as the gentry who created it. Yet Even so, civil discourse has remained the discourse of those privileged to rule and not be ruled.

Buckley and his crowd of East Coast elites; with their ivy league university ties, yachting and shooting expeditions, summers in Europe or Martha’s Vineyard, and politely stated disagreements about childrearing, or the Soviets, or how to deal with Castro, began to decline when African Americans whom they hardly knew existed began to demand the civil rights the elites never imagined giving. And when from among their own youth uncivil protests arose against their pointless war in Vietnam.

That uncivil discourse has spread over the decades, reflecting the growing number of Americans excluded (no matter what form of discourse they practice) from self-determination and access to political power.

But the governing elites haven’t given up easily, and they endure not only because they control the vast majority of American wealth, but also because the discourse of which they are the masters is so deeply engraved on our economic and political institutions. Until now.

Because Americans are no longer electing the carefully selected successors and perpetuators of the old elites. We’re electing people who don’t own yachts and have never been the Martha’s Vineyard. People who are powerfully attracted to money and privilege, but who don’t know fine wine from two-buck-chuck. People who don’t know the Senate and House rules of civil discourse or who just don’t care.

And they are not bumpkins, boors, rednecks, crackers, and barbarians. They are not stupid. They have just realized that “civil discourse” serves only the interests of an entrenched elite, and that some other form of political discourse has become necessary for them to take power.

The one that shows up at Black Lives Matter rallies, and now town hall meetings.

Hank Williams Jr. sang in 1984 about “an attitude adjustment.” https://www.youtube.com/watch?v=ZFhubbRugak. Its a common theme in the music that moved from the impoverished margins of Appalachian society to eventually become mainstream. And not dissimilar in that respect from Rap and Hiphop that have exploded out of the African American community to capture the popular imagination well beyond that community.

In the comedy clubs and on late night TV it is a discourse that is called “irreverent” because it knows that nothing deflates the pretentiousness of civil discourse like a sharp verbal stick.

Neither form of music, or comedy in its original form follows the rules of decorum, manners, and respect. They represent a newly emergent civil discourse from a far different civilization than that which has governed American society since the 18th century. And their sometime valorizing of violence (discursive and social) may be understood as the last resort of those rendered voiceless by the rules of civil discourse that continues to exclude and marginalize.

What the Wall Street Journal laments is the verbal form of this musical kick-back against convention and the elites that control it. You can call it polarized and polarizing, but the poles weren’t determined by the protestors, but by the powerful through the process of exclusion.

And of course there is a solution to those raucous town hall meetings and angry protests at the capital or town hall. Listen to what people are saying and asking for, and then act on it. Don’t keep making promises you as a legislator have no intention of keeping. Quit doing what the Republican Party has done for the last 6 years by giving the whole civil society a big middle finger and refusing to serve anyone but its extremist base.

Right now civil discourse is a condom on an impotent legislature. Is castration any worse? Apparently a lot of angry people think it at least has entertainment value.

Time will tell whether this emergent “uncivil” (I prefer differently-civil) discourse will merge with or sublimate the old elite “civil discourse” to form a new language of public politics and practical governance. The danger that it will slip into pure emotional expressionism, and lose its power to create coalitions around mutual interests, is palpable. There is also the danger that a new generation of elites will master this new discourse as a means of means by which they can displace the old elites while not actually sharing political power with their supporters. The Trump phenomenon could be the beginning of that end to American society.

Or perhaps a wake up call. History shows that time changes all things, including “civil discourse” and indeed the very concept of civilization. Perhaps if the WSJ and the self-important and deeply privileged elites it represents are willing to invite other voices into the room, even if their speech lacks the mannered nuance of a Bill Buckley, they’ll discover the process of a transfer of power is less painful for all concerned.

Otherwise? Well people might just say, with compliments to Johnny Paycheck, “take your job and shove it.” or go another route, where the last king is strangled with the entrails of the last priest. Probably in Washington, but quite possibly in New York.

June 4, 2017 Binary BS and PC Politics
Recent Comments
0 | Leave a Comment
Browse Our Archives
get the latest from
Best of Patheos
Sign up for our newsletter
Related posts from Robert Hunt: Interfaith Encounters

Happy May
Over the past couple weeks, there's been a common theme - burnout....
view all Interfaith blogs
What Are Your Thoughts?leave a comment
Copyright 2008-2021, Patheos. All rights reserved.
error: Content is protected !!