Telling Truth in Public is Civil, not War

PJames Ragland has suggested that the debate about Dallas’ civil war monuments has become an uncivil war. https://www.dallasnews.com/opinion/commentary/2017/07/21/talk-ofremoving-confederate-monuments-starts-uncivil-war-words-dallas.

He quotes Dr. Michael Water’s Facebook posting stating that these are “monuments to treason and slavery” as an example. And he notes that John McCammon, 1st Lt. Commander of the Texas Division of the Sons of Confederate Veterans, has “fired back” saying, “That is a false narrative. It is in no way celebrating slavery.”

While I realize that neither statement by itself is part of a reasoned discussion on the future of the monuments, I’m incline to take Dr Waters and his community more seriously. First because historically the black community must forcefully and uncompromisingly put forth its experience in order to not be compromised into voicelessness. And as Dr Waters has pointed out, if these monuments helped remind us of our history they certainly haven’t done anything to eliminate racism or white supremacy.

Moreover monuments celebrate the historic, while museums that place things in context help us understand the historical. If we confuse the two we’ll be haunted by our history and never enlightened.

So let’s be more specific about what these monuments valorize, the message they convey if they remain historic and not historical. I would argue their meaning is far more insidious than valorizing slavery and treason. They valorize war as a realm, even the ideal realm in which to realize national ideals and personal courage. In this monuments war becomes the realm of true sacrifice and genuine heroism.

And this perpetuates two lies. The first lie is that war lifts humans to greatness. It does not. It diminishes the humanity of all involved; murdering innocents and rendering innocents murderers. There is nothing good about war.

The second lie is that beneath the treason and slavery that we despise there was something good and honorable about the confederate cause and the men who led it. There wasn’t and they weren’t. True, individuals were driven by all kinds of complex motives. No doubt there were acts of personal heroism. But the confederacy stood for the right of whites to trade in and exploit as slaves black Americans. And the confederate uniform and flag were and are symbols of that confederacy and its core purpose.

If you want to portray Johnny Reb as a non-slave owning farmer caught up in war then ditch the uniform and give him a plow. Because when a man puts on a uniform he submerges his identity into the cause it represents. That is why they are uniform.

And the generals in uniform on their chargers? They weren’t merely slave owners. They were leading the fight to perpetuate slavery and permenantly deny any hope of freedom to slaves and their descendants. There were slave owners among the founding fathers of our nation, but they could and did release their slaves. The confederate generals fought to make this illegal; to remove the possibility of ever acting in good conscience. They did in fact stand for a culture of permanent white supremacy and permanent legally enforced evil.

Moreover, they knew they were making a moral choice when they chose evil. The debate over the morality of slavery was a constant public discourse.  The fact that they believed they were right changes nothing. The leaders of the confederacy deserve neither honor nor mercy. They and their slaveholding friends were morally bankrupt or worse even if some of them were my ancestors.

Still I would argue that because these monuments perpetuate lies, at least one needs to both stand and be confronted with the truth.

When I visited Wittenberg, Germany I came to a church where Martin Luther preached. On the wall outside was a bas relief called a “judensau” It is a gross pornographic attack on Jews typical of Luther’s culture. One might imagine such a monument would be removed after the Holocaust. Instead another bronze statue was put below it in which blood gushes from the ground crying like Abel’s blood for justice. And a sign in multiple languages tells the public that this (the Judensau) leads to this (the Holocaust.)

So I suggest that at least one monument needs to turned into a public statement that those proud men on horses rode them amid the toil, exploitation, and death of innocent men and women. They  need to ride among the detritus of Jim Crow, lynchings, the KKK in all its horror, segregation, and all the injustices suffered by the African American community on a daily basis. Because those horrors lie at their feet and cry for the justice that their descendants must give.

We need to find the artist that can tell the whole story and put the whole story in the public center of our city. Make at least one of the monument’s ghosts come forth from hell to tell the truth about who he was, and what he did. Perhaps an exorcism can help cure the haunting. 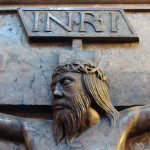 July 26, 2017 Culture Eats Ideology for Lunch
Recent Comments
0 | Leave a Comment
Browse Our Archives
get the latest from
Best of Patheos
Sign up for our newsletter
Related posts from Robert Hunt: Interfaith Encounters