For God So Loved the World…That He Couldn’t Stay Away: A Christmas Meditation

This is the heart of the Good News of the Gospel of Jesus Christ and therefore of authentic Christianity: the incarnation of God as “one of us.” Take it away and Christianity is little more than a moralistic, therapeutic deism. The incarnation, as event and doctrine, is the distinctive note of the Christian witness and the basis of Christian hope.

But many Christians believe in the incarnation of God in Jesus, but fail to grasp the fullness of it as good news about God. Karl Barth best expressed this good news about God in a nutshell: the humanity of God—the startling title (given his early emphasis on God’s “wholly otherness”) of one of his last books.

If Barth was right, and I believe he was, God was always inclined toward us, always determined in himself, by his free decision, as “He who loves in freedom,” to be for us in Jesus Christ. Thus, we must think of the Son of God, the second person of the Godhead, the Word, as the “Platzhalter” for Jesus Christ in the Trinity.

Many Christians think of the incarnation as God’s rescue mission, its only purpose being to get God the Son onto the cross to change God’s attitude toward us from wrath to love. This does not take the truth of the incarnation seriously enough.

Many other Christians think of the incarnation as God’s identification with us, to reveal himself to us, but they too fail to take the incarnation seriously enough because, for them, too often, the incarnation is something of a charade insofar as it was simply a divine “addition” of an impersonal human nature to the Son’s pristine, impassible divine nature.

If we take the incarnation radically seriously, we must conclude that it was not merely a “Plan B” because of humanity’s rebellion or merely a pretense that made God appear to be one of us, with the “God part” of Jesus remaining incapable of suffering.

I believe the one of the most beautiful, inspiring and truthful pieces of theological literature (which is also profoundly devotional) is Barth’s essay in Church Dogmatics IV/1 entitled “The Way of the Son of God into a Far Country.” There Barth, perhaps almost in spite of himself, grasps and expounds the radicalness of the incarnation. The Son of God, God the Son, God himself in the person of the eternal Word, too leave of the Father’s house and entered into the depths of human misery for our sakes. The result is, for Barth and for me, that God cannot be thought of as untouched, pristine, unaffected by what happened with Jesus Christ.

Because of the incarnation our misery is forever imprinted in the life of God but so is our transformation to glory. The wounds of Jesus (and not just the ones put there by the nails of the cross) are part of God’s life but so is his glorious resurrection. Because of the incarnation God’s grace and glory are part of every human person’s being (in potency) and, with faith, every human is capable of participating in God’s divine life and family forever.

Jesus did not “drop his humanity” when he ascended into heaven; he took his resurrected, glorified (but still wounded) humanity with him and he remains human forever. Because of the incarnation, the event of God’s love, one of us is one of God; our being is God’s and God’s is ours—if we have faith in his Son. There’s no hint of pantheism in that; it’s all due to God’s grace which means God could have remained God without the incarnation. But he chose not to be himself without us.

I believe, with the Eastern churches, that the incarnation was God’s great plan and purpose in creation all along; it was not merely a “rescue mission.” It became a rescue mission, but it would have happened even if humanity had not fallen due to rebellion. The purpose of God toward the world, toward humanity especially, was to join with it and join it with him by becoming one of us so we could become part of him. The original plan (to speak mythically) did not include the cross, but it became part of the plan when humanity rebelled. Because of our rebellion and God’s refusal to give up on his plan, the wounds of Jesus remain forever embedded in God’s life.

What’s the final outcome, the “cash value,” of such a vision of God and the world? It must be that love is the fabric of reality, the heart of what it is all about to be, even for God. This narrative, this story, this eventful reality of the incarnation, if taken fully seriously, cannot help but push aside and out of the way any notion of God as desiring glory above all. Or, rather, it requires a redefinition of “glory” from our fallen notions of it. This truth tells us that Jesus’ wounds are the most glorious thing possible—even for God. The doctrine of God cannot be what it would be without the incarnation and crucifixion of Jesus. It is sad that so many Christians disregard this and prefer instead a philosophical idea of God as glorious according to human conceptions of glory—immutable, impassible, apathetic, self-enclosed, infinite (in the sense of incapable of limitations).

My prayer this Christmas is that all Christians will come to grasp the radicalness of the incarnation and allow it to transform their understanding of God as one of us. 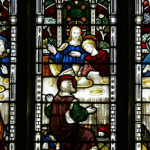 December 23, 2011
Why Belief In the Deity of Jesus Christ Is Crucial for Christian Identity
Next Post