Can We Dispense with the “Wrath of God?” (And Some Thoughts about Changing Hymns)

Can We Dispense with the “Wrath of God?” (And Some Thoughts about Changing Hymns)

Because some of my readers are not Christians I will say “up front” that this post is meant only for Christians. Others may listen in, but I am here speaking into a conversation among Christians.

Recently I sang the popular contemporary hymn “In Christ Alone” by Keith Getty and Stuart Townend—with a group of students. It’s one of my favorite contemporary hymns. In fact, I like almost all of their hymns. I know “In Christ Alone” “by heart” and so sang some of it without looking at the words in the hymnal. But I found myself singing the wrong words! Or were they the right words? I would say I sang the right words—in the sense of the words Getty and Townend wrote. (If anyone changed the words of one of my books, articles or blog posts and then claimed they were the “right words” we would “have words”—pun intended!)

Now, I realize changing hymn lyrics is nothing new. Over the past few decades many denominations have “cleansed” hymn lyrics of what they consider archaic, offensive, or theologically incorrect lyrics. What struck me about the change in this case (“In Christ Alone”) was that the hymnal was put together by a group that I would consider moderately evangelical, certainly not “liberal.”

My question is this: Are we giving up, dispensing with, the concept of “wrath of God” and, if so, is that what we should do?

When was the last time you heard a sermon in a non-fundamentalist context about the wrath of God? I haven’t heard the wrath of God mentioned in church in a very long time. Very few theology books discuss the theme of God’s wrath. I would argue that it is gradually becoming otiose if not dying out completely (outside of fundamentalist circles).

There’s only one problem with that (assuming it is happening): the Bible, which most Christians claim as their main source for faith and life, contains a great deal about the wrath of God. Are we perhaps joining Thomas Jefferson in excising Scripture of all that we find unreasonable or offensive?

On the other hand, I sympathize with Christians who are uncomfortable with pulpit-pounding,” hellfire-and-brimstone” emphasis on the wrath of God. There’s another, older hymn entitled “God Is Angry.” The lyrics dwell too much on God’s wrath with little acknowledgement of God’s love. During my lifetime I have heard sermons that portrayed God as vicious, wrathful, vengeful, downright scary (as opposed to deserving of healthy awe).

Is there a middle way? Can “wrath of God” be rescued from hellfire-and-brimstone, fire-breathing theology that emphasizes God’s anger over God’s love? Is omitting all references to God’s wrath in hymns and sermons an over reaction, throwing the baby out with the bathwater?

Recently I re-read an old book that I treasure; it has had a great impact on not only me but also theologians such as Jürgen Moltmann. The book is Theology of the Pain of God (1958, E.T. 1965) by Japanese Protestant theologian Kazoh Kitamori. It is said to be “the first original theology from Japan.” It constitutes a sustained and profound argument against liberal theology’s “serene view of God.” Kitamori argues that “the love of God becomes the wrath of God in his response to sin. But God loved us, the objects of this wrath.” (37) This conflict within God, between God’s love and God’s wrath, leads to the “pain of God.” “The pain of God means that the love of God had conquered the wrath of God in the midst of the historical world deserving his wrath.” (34) In other words, the wrath of God is real and not to be neglected (something both Karl Barth and Emil Brunner also emphasized in their non-liberal, non-fundamentalist expositions of God’s response to sin.) However, it does not reign over God’s love; the reverse is true. But love’s conquest of wrath causes God pain. How so? “The pain of God is the forgiveness of sins. … [In forgiveness] one must bear responsibility for the sinner and suffer pain. However, the pain, if real, penetrates the one who forgives, and issues forth in intent love.” (40)

Kitamori helpfully brought together God’s love and wrath, with love winning over wrath but only by means of God’s pain—demonstrated on the cross where God’s forgiveness cost him his life and the “pain of God”—not just physical pain but the costly pain of forgiving betrayal.

Wrath of God must be interpreted as the expression of God’s love when it is betrayed and rejected. Otherwise we have either a monstrous God or a Janus-like (two-faced) God. God’s essence is love; wrath is not an attribute of God but the form God’s love (and justice) takes in the face of betrayal and rebellion. But the wrath is consumed by God’s love in pain.

Dropping all reference to God’s wrath is a betrayal of the New Testament and even of Jesus. And, I believe, it is a betrayal, however unintentional, of the cross and the gospel. And it inevitably elevates humanity as if our sinful rebellion against God is “no big deal.”

Now, someone might wish to argue that, in spite of this explanation of the wrath of God, the lyrics of “In Christ Alone” are still problematic and I would agree. To say that the “wrath of God was satisfied” is theologically problematic. My answer, however, would be that most hymns of any length that dare to deal with deep theological issues have some problematic lyrics.

When I was growing up in church our pastor used hymns as teaching tools. Often, between congregational singing of verses, he would stop the singing and, while the organ and piano continued to play the tune softly, explain the meanings of words and phrases—using a homiletical tone and reaching for inspiration, not just information.

A problem with much contemporary hymn singing is that it takes place outside of any theological context. The hymns “stand alone,” as it were, with no surrounding understanding. And since most churches do very little with theology, the congregants have no confessional or theological perspective on the basis of which to understand the lyrics. This results in an ignorant singing of hymns! That can only lead to problems such as some small group struggling to change the lyrics to make them more suitable or understandable or less offensive—according to their perspective—but often without regard to larger theological perspectives. I wonder if they consider in any depth “What are we doing if we change these words?”

Why not keep the words as written, if the hymn is worth singing at all, but use the singing of the hymn as a “teachable moment?” Include some paragraph of explanation in the worship folder or insert—if you feel uncomfortable explaining them orally during the worship service. That seems to me a better approach, and a very useable one, than simply changing the lyrics and letting people wonder why or even sing the wrong lyrics (as I did)!

Note: Please feel free to respond with a comment or question, but please keep your comment relatively brief and don’t expect an answer to your question. I may or may not have time to respond. I do my best, but my time is limited. If you hope that your comment will be posted here, make sure it is not insulting to anyone and moves the conversation forward in a respectful and (hopefully) insightful way (viz., avoiding reliance on clichés).

November 6, 2014
The "Upside Down Kingdom": Christians Should Care for the Weak
Next Post 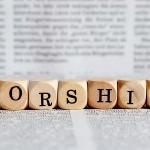