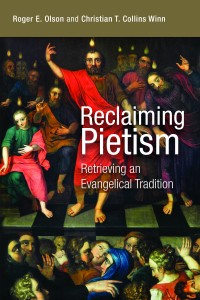 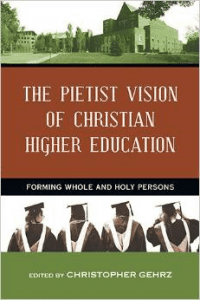 These two books emerge out of a decades-long project at Bethel University in Minnesota where I taught (1984-1999) and where Christian and Christopher teach (theology and history respectively). The project was and is to reclaim Bethel’s Pietist heritage. Bethel was founded in the 19th century by Swedish immigrants who happened to be Baptist but were also Pietists—Pietists who became Baptists. The Swedish Baptist Conference (later renamed the Baptist General Conference) is a distinctive Baptist tradition in being Pietist first and Baptist second. The movement grew out of a Pietist movement in Scandinavia called the (in Swedish) Lasäre—“Readers”—because they met in small groups to read and discuss the Bible which was illegal in Sweden in the early 19th century (and before). Many of these Scandinavian Pietists emigrated to the U.S. in the 19th century to find religious freedom. In their home countries they were being persecuted. In the U.S. they eventually founded several distinct denominations that became the Evangelical Free Church of America and the Evangelical Covenant Church of America.  But many became Baptists—even before arriving in the U.S. Some of them melted into the Northern Baptist Convention (now the American Baptist Churches). That was the case with many Danish Baptists. Others, however, retained their distinctness—especially the Swedes. Bethel and the BGC emerged out of that tradition. During the 20th century, however, the BGC and Bethel lost much of their Pietist heritage as they melted into the larger evangelical movement. Gradually fundamentalists joined as pastors and began to pressure the denomination and university (college and seminary) to conform to American fundamentalism. The Pietists were noted for an “irenic approach” to non-essentials of the Christian faith. For example, they decided not to require premillennialism and agreed to disagree about Calvinism and Arminianism—permitting both to co-exist on an equal basis within their movement. Gradually, however, the non-Pietist fundamentalists who came into the denomination without that irenic spirit began to pressure it and the college and seminary (now a university) to elevate non-essentials to essential status. The motto of many Pietists has been “In essentials unity, in non-essentials liberty, in all things charity (love).” During my own fifteen years among the Swedish Baptists I felt the increasing pressure from pastors and some constituents to drop the irenic spirit and move with the rest of evangelicalism in a more fundamentalist (or neo-fundamentalist) direction. For example, I had a dear colleague who taught Old Testament who happened to be amillennial in his view of the Kingdom of God and eschatology. Throughout his teaching tenure at Bethel he was harshly attacked by some pastors and constituents who thought premillennialism, if not dispensationalism, was an essential of evangelical faith. When one of my other colleagues published a book containing his view of the future as open even for God (“open theism”) many pastors called for his firing even though that view did not in any way contradict the denomination’s statement of faith (which was nearly identical with the National Association of Evangelicals’ statement of core doctrines).

Out of that milieu of controversy came a strong impulse, especially on the part of Bethel faculty, to rediscover, retrieve, and renew the denomination’s and university’s Pietist heritage—and then to tell the whole world about it with a hope of other evangelicals re-embracing the Pietist ingredient in American evangelical Christianity. “Pietism” had become almost a dirty word even among evangelicals; it was being misrepresented and surrounded with misconceptions. (One BGC pastor told me “Pietism is just a mask for doctrinal indifference.”)

Bethel held several conferences with notable scholars of Pietism present and presenting. An earlier book entitled The Pietist Impulse in Christianity came out of those conferences. (I already blogged about it here earlier.) Now these two books emerge from that decades-long project. The book Christian Collins Winn and I authored (above) is independent of the project but inspired by it. The one edited by Christopher Gehrz is a product of the project and contains essays on Pietism and Christian higher education by (mostly) Bethel faculty.

I believe this retrieval and renewal of the Pietist heritage deserves greater notice and comment by evangelical leaders. Hopefully that will come. We will keep pressing for it.

Unfortunately, the reason this project and these books are necessary is the overwhelming suspicion of Christian inwardness and experience among “mainstream” evangelical leaders—especially theologians. Although we believe Carl F. H. Henry and his minions have made great contributions to “the evangelical mind,” we also think they brought about an over-emphasis on the intellect to the neglect of the heart. In other words, we think there is a “scandal of the evangelical heart”—especially in evangelical theology where any mention of experience immediately raises cries of “Schleiermacher!” (Friedrich Schleiermacher was the “father of liberal theology” and claimed to be a “Pietist of a higher order.” What he really said was that he was still a “Herrnhutter of a higher order.” “Herrnhutter” was a term for “Moravian.” Somehow that quote of his, in a letter to his sister meant for his father who had disowned him, has been translated as “Pietist of a higher order.”)

For me, this project is similar to the one I have worked on for twenty-five years—of reclaiming “Arminianism.” Like “Arminianism” “Pietism” has been so distorted and surrounded with so many myths that those of us who claim the label and the heritage it represents struggle to overcome the undeserved stigmas placed on them and us.

I urge you to at least go to Amazon.com and read the descriptions of these two books and the promotional statements for them. Then, I hope you will purchase and read them. If you are not involved in Christian higher education the volume edited by Gehrz may not be for you, but mine and Christian’s will interest all who have any interest in Christian history and especially those with an interest in the “other” side of evangelical history and theology (the one rarely mentioned or explored by the semi-official spokespersons for “mainstream” evangelicalism).

December 2, 2014
Two Books: A Recommendation and an Invitation to Read and Dialogue
Next Post

December 5, 2014 Memories of Stanley J. Grenz with Special Attention to Criticisms of His Theology (and Some Hitherto Unrevealed Facts)
Recent Comments
0 | Leave a Comment
"I know you feel compelled to respond to someone else, but please stick to responding ..."
Roger Olson Jesus and Roy Rogers
"I know many evangelical Christians who voted for Trump and their reasons vary greatly with ..."
Roger Olson Jesus and Roy Rogers
"And what does that say about abortion, if anything?"
Roger Olson A Strange Thought Experiment in Ethics
"The biggest problem with Eldridge's work is that his main points simply don't make Jesus ..."
T Freeman Jesus and Roy Rogers
Browse Our Archives
Related posts from Roger E. Olson