In Chapter 1, “The Genesis of the Malestrom,” Carolyn Custis James explains what I have long believed—that men and women share the image of God equally and that patriarchy is a result of the fall, not part of the intended pattern of creation. Also, contrary to belief that “this is a man’s world” (intended prescriptively, not only descriptively), Christians ought to recognize and live out the truth that this is God’s world. It does not belong to either gender more than the other and belongs to neither alongside God. But, God has delegated the task of taking care of creation equally to men and women.

James then undertakes to explain what it means, biblically, to “be a man.” Biblically, it means to bear God’s image and likeness. Part of that, she rightly explains, is to live in community, fellowship, with God and each other. According to James, “manning up,” living out the image of God, means, for men, bearing God’s image in terms of character. But, of course, she believes this is also true for women.

According to James, and I agree, the whole idea of God creating humans, both male and female, in his own image and likeness overturns patriarchy. Patriarchy distorts humanity.

In general, I agree with James’s main points in this chapter. Trouble for me begins when she talks about “masculinity.” I wonder what she thinks true, undistorted, non-patriarchal masculinity looks like other than just being human in the image of God. Wait. I anticipate—many will ask “Well, how should it look any different than that?” My point is not that it should look different than that; my point is to wonder whether there is anything distinctively valuable and good about masculinity that is different from femininity. Or are they the same when at their best? Or is true masculinity a man becoming more feminine?

This is the so-far lingering question—not only hovering over this book (which may yet answer it satisfactorily) but also over the whole non-patriarchal, non-complementarian discussion of gender. Are liberated women ever comfortable affirming something distinctive about maleness that we might call “masculinity?” Or is masculinity always patriarchal and distorted unless it is conformed to femininity? Can there be genuine equality of privilege and power between males and females without sameness?

This is a complicated question and I become very impatient with people who won’t at least attempt to understand it and who react negatively just to it being asked.

Let me explain some background to the question. Almost everyone I know agrees that women tend to be more nurturing, compassionate, relational, collaborative than men—while acknowledging that men can have these characteristics also. Everyone I know also agrees that these are good and positive traits. The question I am asking of James and other egalitarians like her is whether there are any positive tendencies in terms of traits that especially characterize men—even if women can have them, too. This is what I am not hearing or reading from the egalitarian crowd. In reaction against patriarchal complementarianism they shy away from affirming maleness or masculinity as positive and good in any distinctive ways. They tend to describe “Christlikeness” in ways that they (and here by “they” I don’t mean only women) also describe women. So the result is that to be “Christlike” is to be non-masculine and woman-like.

I know that the moment I even ask that question many egalitarians almost break out in hives because they are conditioned by fear of patriarchy to assume that difference means inequality. What if it doesn’t?

There, I’ve asked my question several times. I know from hard experience many will misunderstand it and suspect that somehow, as a man, I am engaging in some kind of anti-female backlash against the rise of women (or something). That is absolutely not true, but all I can do is ask you to trust me about this. I am confident if you asked my female family members and colleagues and friends they would tell you I am no patriarchalist. I have fought for women’s full liberation from patriarchy in the circles where I have any influence. I have made a point of attending churches pastored by women. I have made a point of arguing for hiring women to positions traditionally held by men. I have fought for my daughters whenever they were held back from their goals because they were female rather than male. I raised them to believe they should break through any such barriers to achieve the full fulfillment of their humanity. My marriage has always been one where all decisions that affect both of us are made mutually.

Some years ago, though, I was invited to give a plenary address at an annual meeting of the organization Christians for Biblical Equality. I spoke on the topic “Beyond Equality to Interdependence.” I felt my talk was not very well received and that because the women oppressed by conservative evangelical patriarchy were not ready to listen to anything “beyond equality.” They had an agenda—to fight conservative evangelical patriarchy and complementarianism and that prevented some of them, anyway, from being able to hear that men and women both have good qualities and characteristics that do, indeed, complement each other and that God’s program calls for interdependence between us—not in place of equality but beyond mere power equilibrium.

August 17, 2015
Over Reactions and the Search for Balance
Next Post 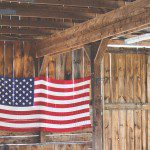 August 20, 2015 Please Remove National Flags from Your Christian Worship Spaces: A Plea on Behalf of the Flag
Recent Comments
0 | Leave a Comment
Browse Our Archives
get the latest updates from
Roger E. Olson
and the Patheos
Evangelical
Channel
POPULAR AT PATHEOS Evangelical
1