Bill Gaither and Me… 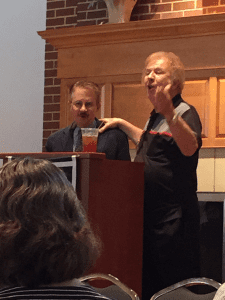 I rarely post pictures here–especially of myself. But this one is a treasure (for me). After preaching my sermon “Certainty Not” in Truett Seminary chapel (Tuesday, September 15, 2015) we, the seminary community, enjoyed a casual lunch together with special guest Bill Gaither. Then he spoke for about thirty minutes. Afterwards, before we dismissed, I prayed over him (something we always do for our special guests). At the end of my prayer he launched into singing “Farther along, we’ll know all about it…”–an old gospel song he probably knew I grew up singing. So I sang along and we basically sang a duet together. There’s a side to me only a few people know about: very sentimental especially about “old school” gospel music. I grew up singing it and hearing it and I still like it. I have about one hundred songs on my ipod and all are of that genre. Most people under forty (maybe fifty) wouldn’t know either the songs or the singers. They were written by the likes of Fanny Crosby, Albert Brumley, Stuart Hamblin, Ira Stanphill, Philip Bliss, Johnson Oatman, Herbert Buffam, Haldor Lillenas, et al. These songs were standards in the tent revivals of the 1950s and earlier–when people were handed Funeral Home fans as they arrived. And they were sung in Sunday evening services in many evangelical churches. And they were played on Christian radio stations as recorded by quartets and family singing groups. Gaither songs are actually among the “newest” of that genre and introduced a new element to “inspirational music” in the 1960s and beyond. However, I also promoted and organized one of the very first Petra concerts–in about 1975 and really got into their music except the harder, rockier stuff which never appealed to me. I know…that’s “old school” now, too. 🙂 But I tell my students that someday they will drive a hundred miles to hear and hopefully meet David Crowder and their children or grandchildren (or both) will laugh at them and call that “old school.” What goes around comes around.