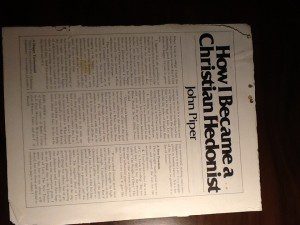 Some here and elsewhere have asked me about John Piper: Do I know him? What do I think of him? That’s because, I suppose, of my open opposition to “high Calvinism” (five point Calvinism) and the Young, Restless, Reformed Movement insofar as it places that theology at its center. John Piper has long been the real “guru” of that movement and he has long been a staunch advocate of high Calvinism including divine determinism.

Recently I was rifling through some of my old files and came across one of the first, if not the first thing Piper ever published. It certainly is the first thing I ever read about him and it was, when I first read it and cut it out of the magazine and put it in my files folder of special articles to keep, my first introduction to him. I had never heard of him before reading this article (a photo of which I am going to attempt to attach here). What I have, what I retrieved from an old file, is not a photocopy; it is the “thing itself”—the actual pages of the article.

The article is entitled “How I Became a Christian Hedonist.” It was published in HIS magazine’s March, 1977 issue. Here is how InterVarsity Christian Fellowship, the publisher of HIS, describes the magazine on its web site: “HIS magazine began in 1941 as a way to encourage communication and dialogue on campuses. From October to June, students and staff were informed, encouraged, and challenged. Between 1941 and 1986, InterVarsity published approximately 400 issues of HIS magazine, exposing readers to over 4500 articles, poems, short stories, devotionals, editorials, and book reviews.” Long before he became known as the leading advocate of high Calvinism among American evangelicals and especially as the “guru” of the YRRM, Piper was known as the advocate among evangelical Christian especially in America of “Christian hedonism.” This article, so far as I know, was his first public, published announcement of that perspective. Little did I know when I read it in 1977 and carefully cut it out of the magazine and filed it away, how my life would eventually be affected by Piper.

If you are interested in reading the article, or at least edited versions of it, use Google or any search engine. And, of course, there is Piper’s 1986 classic book Desiring God: Meditations of a Christian Hedonist (1986, Rev. ed., 1991).

In 1977, when I first read this article, cut it out of the magazine and filed it away, I was a student at North American Baptist Seminary (now Sioux Falls Seminary) in South Dakota. That Spring I was taking a class on Contemporary Theology taught by Bethel College (St. Paul, Minn.) theology professor Al Glenn. He was flying down to Sioux Fall from the Twin Cities every Thursday evening to teach the class. I volunteered to pick him up at the airport, drive him to the seminary, and take him back to the airport after class—every Thursday evening through the semester. I didn’t know him, but I suspected he was someone I should get to know—beyond the classroom. I noticed then that John Piper, the author of this intriguing article, was at Bethel College. The article’s byline stated that “JOHN PIPER is assistant professor of biblical studies at Bethel College in St. Paul, Minnesota. He has degrees from Wheaton, Fuller, and the U. of Munich.” Sometime during that semester I drove up to the Twin Cities to visit some used bookstores and the Luther Seminary bookstore. I met up with Al Glenn at Bethel for coffee and he introduced me to a young John Piper. That was the only time we met until 1998 when Piper subjected me to an inquisition about open theism. He was then pastoring Bethlehem Baptist Church in downtown Minneapolis but was exercising great influence over Bethel College as a constituent pastor and leader of a group of constituent pastors who called themselves the “Edgren Fellowship.” They organized to oppose open theism within the denomination (Baptist General Conference/World Converge) and college.

Some people assume that I must disagree with Piper about everything, but that’s not true. Here, on my blog, I have before expressed agreement with him about controversial issues such as the subsequence of Spirit baptism or the “infilling of the Holy Spirit” as an experience every Christian can have after conversion. And I have explained how I agree with his definition of “biblical inerrancy” (a term I don’t use) as “perfection with respect to purpose.” Take away the aggressive high Calvinism and I think Piper and I would find deep and broad agreement on many things. I know one thing we certainly agree about. We both think Charles Wesley’s hymn “And Can It Be” is one of the greatest musical expressions of the gospel ever written and composed. (Of course, we interpret it differently. I interpret it as Wesley intended.)

In the article Piper begins by confessing that earlier he had been worshiping and serving God out of a sense of duty thinking it would be wrong to worship and serve God for the pleasure it would give him. He thought of self-interest as a wrong motive for worshiping and serving God. “Then,” he wrote, “I was converted to ‘Christian hedonism.’ In a matter of weeks I came to see that it is unbiblical and arrogant to try to worship God for any other reason than the pleasure that is to be had in him.” In the article he went on to quote Blaise Pascal (Pensées) and C. S. Lewis (The Weight of Glory) and the Bible (especially Psalms). The gist of the article is expressed in a later axiom of Piper’s: “God is most glorified in us when we are most satisfied in him.” Every Piperite knows it by heart. In the HIS article, however, that axiom is never mentioned.

Piper’s argument that worshiping and service God brings joy and peace was not controversial. If that’s all his HIS article meant I wouldn’t have kept it. What caught my attention and caused controversy was his statement that “It is unbiblical and arrogant to try to worship God for any other reason than the pleasure that is to be had in him.” At the end of the article, written for a college and university audience, Piper wrote “Christian hedonism does not put us above God when we seek him out of self-interest. It is precisely in confessing our frustrated, hopeless condition without him that we honor him. … On the contrary, the one who is actually setting himself above God is the person who presumes to come to God in order to give rather than to get. With a pretense of self-denial he sets himself up as the benefactor of God—as if the world and all that it contains were not already God’s. No, the hedonistic approach to God is the only humble approach because it is the only approach which comes with totally empty hands. Christian hedonism pays God the respect of acknowledging that he and he alone can satisfy the longings of the human heart to be happy.”

I remember when I first read this, way back in 1977, thinking something like “Wait! Something’s wrong here—as well as right.” Isn’t there an alternative to these options posed by Piper? One is “seeking God out of self-interest;” the other is worshiping and serving God with the intention of being “the benefactor of God.” Surely those are not the only options!

The question at stake is an important one: Why should I (or anyone) worship and serve God? Piper poses really three options and no more (at least in this article). The first was his original motive—before his “conversion” to Christian hedonism: duty alone. With him I fear far too many Christians try to worship and serve God solely out of a sense of duty. The second is what he calls “Christian hedonism.” At least in this article Piper went beyond merely saying that good actions such as worshiping and serving God will produce happiness; he said that “It is unbiblical and arrogant to try to worship God for any other reason than the pleasure that is to be had in him.” The third is the one he ends with and criticizes: Worshiping and serving God because somehow God needs our worship and service. (I did actually hear that articulated more than once by speakers in chapel at Oral Roberts University!)

Isn’t there a fourth option? I think so. It’s the one I grew up with in my native Pentecostalism and the one I still hold to. We should worship and serve God because God deserves our worship and service because he is goodness itself and, even though worshiping and serving God should not be motivated by the pleasure we get out of it, it does result in joy/pleasure when done rightly (viz., with right motives).

My problem with Piper’s article, and with his “Christian hedonism” in general, lies in that one seemingly insignificant sentence: ““It is unbiblical and arrogant to try to worship God for any other reason than the pleasure that is to be had in him.”

January 18, 2016
"Diversity": A Much Desired but Often Poorly Understood Goal
Next Post

Evangelical
How Many Basic Christianities Are There?
Roger E. Olson