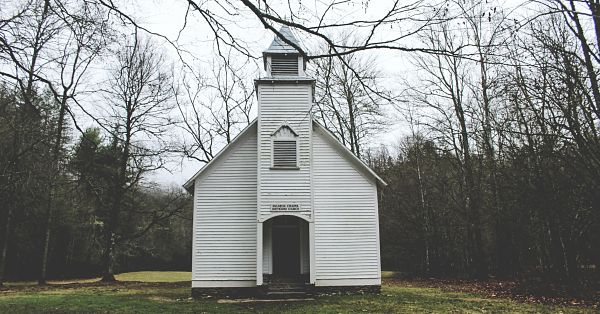 There it was again. The same has happened to me numerous times over the past several years. Someone told me about a great new church in an affluent suburb of a major American metropolis. It is attracting thousands to its services and programs. And among its attractions is that it is “non-denominational.”

This time I said what I thought: “I’ll bet it’s not really ‘non-denominational;’ at least not in the way you think. Let me look at its web site and I’ll bet I can tell you what denomination it affiliates with.” The answer was more or less the usual: “No, no, it’s truly non-denominational; it has no denominational affiliation.”

I always think to myself “Why is that important? What is it about ‘denomination’ that people run away from? And why do churches that are really denominational—in some sense—so anxious to hide their affiliation with other churches or groups?”

I am the editor of the forthcoming fourteenth edition of the Handbook of Denominations in the United States—a reference work that has been published approximately every five to ten years by Abingdon Press (The United Methodist Publishing House) for many decades. I have spoken out publicly, here and in public talks, in defense of denominations. I admit to being completely nonplussed by this trend of churches claiming to be non-denominational even when they do have some denominational affiliation.

First, let’s get something straight about the word “denomination.” Most people simply don’t understand it. Somehow or other, in the popular mind, it has come to connote two things it does not necessarily mean: religious hierarchy and exclusive religious claims. By-and-large, for whatever reasons, many people have come to think a denomination must have something like powerful, authoritative bishops that act without regard to lay people’s concerns. And they have come to think that a denomination must claim to be the only true Christians in the fullest sense of the word “Christian.” Neither connotation is at all necessary to the word “denomination.”

So, back to my story. As I have often done before, I examined the so-called “non-denominational” church’s web site. One of the first things I noticed was its “contemporary feel.” It meets in a building that looks nothing like a traditional church. The worship space looks like an all-purpose gymnasium with a large stage for performances. Lots of track lighting aimed at the stage. Movable seating. No windows in the worship space. Pictures of the worship indicate darkness except on the stage. No choir, just a “worship band.” Then, all the leaders—pastors, elders—are male and relatively young. The only women shown under “Staff” work with children or are secretaries and “assistants.” I began to form an impression based on long experience of studying American Christianity. Non-denominational? Perhaps. But unaffiliated? Not likely.

Then, finally, I found it. Under one heading was a subheading called “Resources.” That’s where I often find evidence of the true nature of the so-called “non-denominational” church. Under “Resources” were logos that were also live links to two well-known conservative networks of churches and pastors: Acts 29 and The Gospel Coalition.

When I returned to the person who had informed me about this “great new non-denominational church” and pointed out this feature of its web site—pointing to at least some level of affiliation with two networks—the person simply dismissed this information as irrelevant because “Those aren’t denominations.” Technically, my informant and interlocutor is right—if “denomination” means what most people mean by the word.

Still, and nevertheless, I consider the church “denominational” INSOFAR AS it affiliates itself with Acts 29 and The Gospel Coalition—even if only using them as special resources for its programs and ministries. (One of my students recently gave me a coffee mug with the phrase INSOFAR AS printed on it because I use that phrase so often.)

Very few churches I know anything about are truly, totally, exclusively “non-denominational” in the sense most people think. In almost every case where I am asked about a church that declares itself “non-denominational” I can find some affiliation of that church with some network of similar churches.

I grew up in a church that prided itself on being “independent” but at least admitting to “cooperating status” with a denomination. The president of that denomination often joked that being a “cooperating church” with his denomination was often better than being a charter member of it. (If you don’t get the joke, he meant that many charter member churches were not very cooperative with the denomination.) The church governed its internal and external affairs for itself with no outside interference, but it affiliated with the denomination in terms of drawing heavily on its resources and contributing to its programs.

In fact, that status has been true for hundreds of years of most Baptist churches. The vast majority of Baptist church in America are truly “independent” in that way—being internally and externally self-governing. They can call whomever they wish to be their pastor. They can dispose of their money and property however they wish. There is no bishop or other authority over a Baptist church. And yet, Baptist conventions, associations, conferences have always been recognized by sociologists of religion as denominations.

One Baptist church I’m familiar with proudly advertises itself as “unaffiliated.” So I visited it to find out just how “unaffiliated” it really is. Yup. A little examination of the literature freely available pointed to its affiliation with some other “unaffiliated” Baptist churches! Some of the “most unaffiliated” Baptist churches in America are actually informally governed by a powerful evangelist or prophet or mega-church pastor. That is, the “unaffiliated” church has traditionally “looked to” some such person as its leader even though, technically, on paper, it is independent. But if that Baptist leader, who is not even a member of the church, ostracized the church’s pastor from his “circle” of approved pastors, the church would dismiss him as their pastor. This is how it works, folks. Not always, of course, but often.

Usually, when I point out a so-called “independent” and “non-denominational” church’s affiliations to people who think it’s totally independent and non-denominational they look very puzzled and a bit nonplussed. Clearly they have been led to believe that is not the case. They were attracted to the church by many good things about it—its wonderful music, its preaching, its programs, etc. But they simply believed the claim that the church is “non-denominational” without thinking to look a little deeper into its affiliations. Sure, it might be strictly internally and externally self-governing, but my point is that, by itself, that does not mean “non-denominational” in the historical, sociology of religion sense of “denomination.”

How well I remember my shock, as a teenager, deeply involved in church life, feeling called to ministry, when I found out that our denomination was actually a denomination! I grew up hearing it called—even by my uncle who was its president!—a “movement” and a “fellowship” and hearing fervent denials that it was a “denomination.” Then I happened to come upon the Handbook of Denominations and, lo and behold, there was a chapter about our little denomination. When I asked my father (ordained in that denomination) and my uncle (that denomination’s president) why our “movement” and “fellowship” was in the Handbook of Denominations the answer was “We are in some senses but not in other senses.” I felt more than a little deceived.

For much of my adult life I had a habit of examining the “Churches” section of phone book “Yellow Pages” in hotels and motels when I traveled. The section labeled “Independent” or “Non-denominational” (depending on the location) was very small. I noticed, however, that throughout the 1990s that section in phone books grew and grew to become the largest! And I noticed that it contained churches that I knew to be deeply embedded in denominations. (Today, of course, hardly any hotels or motels have phone books, so I can’t report on that trend now. But I am willing to bet that if there were phone books in hotels and motels….)

So, now, when I am informed of a “great, new, non-denominational church” my knee jerk response is “What does ‘denomination’ mean in that adjective?” I usually get a very puzzled look in response and when I press the question my informant usually doesn’t know what it means or has an image in his or her mind of a “denomination” as highly hierarchical and exclusivistic. Most aren’t.

Will denominations ever make a “come back?” Ah. They already are doing so—under other labels. There are more denominations in America now than there ever were. The forthcoming Handbook of Denominations (14th edition) will include approximately 225 distinct American denominations most of which have over ten thousand members and over one hundred churches scattered beyond just one geographical area. And many of them are new—founded in the past twenty-five years. And many of them strongly deny that they are “denominations” even though the “connective tissue” between the churches of the “network” (or whatever term they prefer over “denomination”) is very strong.

June 25, 2017
What I Would Believe Were I a Metaphysical Naturalist
Next Post