Some Questions about the Religion Formerly Known as “Mormon”

Some Questions about the Latter-day Saints (Formerly Known as the Mormons?) 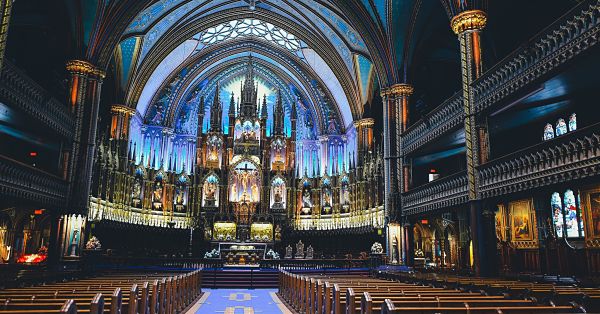 (I know the image above has nothing to do with the LDS Church/Mormons; it looks a bit like the inside of the Mormon Tabernacle. I’m limited in what images I can use here. Those I can use do not include one that is specifically LDS/Mormon.)

Over the past three to four decades I have had many encounters with well-informed Latter-day Saints (formerly known as Mormons). When I taught theology at a major charismatic-evangelical university in the 1980s the evangelist-president (also founder of the school) let it be known that he considered Latter-day Saints/Mormons Christians and allowed them to use his university for their annual regional meetings (much to the dismay of many faculty and students).

When I taught at an evangelical liberal arts college in the 1980s and 1990s I routinely invited Latter-day Saints/Mormons (as they then were known) to speak to my classes. In the last two decades, while teaching at an evangelical seminary, I have traveled three times to Brigham Young University to participate in symposia and conferences put on by Latter-day Saint religion scholars there. Each time I was invited to speak I was treated extremely well. This last time (2017) the conference was about the Protestant Reformation and even the Latter-day Saints religion scholars talked about Luther as if he were a great hero.

Recently (August, 2018), the president of the Church of Jesus Christ of the Latter-day Saints publicly discouraged use of the label “Mormon”—both by Latter-day Saints and by non-Latter-day Saints. I began to hear of this move away from that label some years ago—in Utah at BYU. So what does it signify? Why would the LDS leadership want to distance their church from the term “Mormon?”

Of course, I can’t read their minds. And I am not privy to any insider information. But here is my somewhat informed guess at the reason for it.

In the popular mind, outside of Latter-day Saints culture (and it is a culture, not just a church), “Mormonism” has long connoted something sinister, something cultish. “Latter-day Saints” carries less negative baggage among Christians especially. Not that it’s automatically positive; it’s just not as negative.

Over my years of acquaintance with Latter-day Saints I have noticed a definite trend. Increasingly, Latter-day Saints want to be considered Christians. One religion scholar explained it to me this way: “We are the fourth branch of Christianity—Eastern Orthodox, Roman Catholic, Protestant, Mormon” (he used that label then). I suspect they are finding it more difficult to be accepted that way with the label “Mormon” than “Latter-day Saints.”

My outsider observer’s opinion is that many Latter-day Saints are coming to embrace much more orthodox Christian beliefs than was the case decades ago. There may even be a paradigm shift in the works—stemming from Salt Lake City and Provo (BYU). This was evident to me during my most recent visit to BYU where Martin Luther was celebrated as a great Christian reformer. Inside the auditoriums where the conference was held one could hardly tell that one was at a university widely considered part of a “cult” (theologically speaking) by Christians. Or at one whose tradition includes belief in a great “falling away” from true, authentic Christianity for most of two thousand years of Orthodox, Catholic and Protestant existence.

Just out of curiosity, during my visit to BYU in 2017, I went around the student life center talking to male students. One question I asked two different groups of them was if they listened to “contemporary Christian music.” They looked at me a bit quizzically so I mentioned some names of song writers and recording artists: Chris Tomlin, Matt Redman, David Crowder. Their answer in unison: “Absolutely! They sell their CDs in our campus store!” I followed up with “Do you listen to K-LOVE radio? “Yup, we sure do.” I was a bit surprised, but that fits the trend I have been noticing—that may not have filtered down to the average grassroots LDS/Mormon ward (local congregation) yet.

Once at BYU I asked several Latter-day Saints religion scholars if they believe Jesus Christ is God incarnate in a unique way that no other human being ever was or could ever be. What followed was a fascinating discussion among themselves with one of them who had taught religion at BYU for many years (and wrote many books of LDS/Mormon theology) answering “Yes.” When I asked about some of the sayings of past LDS/Mormon presidents about God once being what we (humans) are and our ability to become what God is—their answer was that they are not required to agree with the sayings of presidents—especially not ones from the distant past.

What many people do not know about LDS religion/Mormonism is that it is an extremely flexible, always evolving religion. Very little is “set in stone” and unchangeable. I can actually envision a day in the not-too-distant future when the LDS Church will become orthodox. With God all things are possible! (Look what happened with the Worldwide Church of God!)

But one thing I wonder about is this: What will they re-name the Mormon Tabernacle Choir?

August 17, 2018
What Are the Greatest Dangers to Christianity Today?
Next Post