Our Feet Are Set on Slippery Places: Reflections on the Political Divide in America

Our Feet Are Set on Slippery Places: Reflections on the Political Divide in America August 7, 2020 Roger E. Olson

Our Feet Are Set on Slippery Places: Reflections on the Political Divide in America 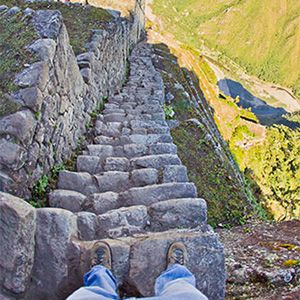 I speak here especially to and about American Christians. Christians on both sides—“conservative” and “progressive”—Republican-leaning and Democrat-leaning—are now saying out loud and with passion that people on the wrong side, the other side, cannot be Christians—just because of their political postures.

Folks, this has gone too far!

Yes, I will admit that there are extreme situations in which I would have to say that, too. If I had lived in Germany in the 1930s I would have said (and suffered the consequences) that so-called “German Christians” who openly affirmed Hitler as a new messiah and the Nazi Party as a new revelation from God were not Christians. I wouldn’t mean, even then, that they could not be saved. Who is saved and who is not saved is none of my business! (I speak here of specific individuals and judging them—as to their eternal destinies.) However, I do not think we have arrived at that extreme in America. At least most people who call themselves Christians have not. There are some who I would have to say are not Christians—insofar as they actually affirm things like white supremacy and harass, bully and assault women.

Here I am only commenting on God-fearing, Bible-believing, Jesus-loving Christians (of all denominations) who may or may not be misguided as to their political persuasions and support of parties and platforms and politicians. The language that some Christians on both sides of the political divide are hurling at each other is downright sinful. People on both sides are purposely alienating friends, loved ones, fellow church members, fellow believers, with invectives and verbal bullying and hate speech. And the worst thing is that they seem to enjoy it! Families are falling apart. Friendships are being destroyed. Even some churches and Christian organizations are making a particular political posture a matter of status confessionis—heresy for having the wrong political opinions.

Now, again, I admit that there are some political opinions that must be rejected by Christians. An example comes from South Africa. During apartheid the World Communion of Reformed Churches (as it is now named) declared opposition to apartheid status confessionis—which meant that support of apartheid was apostasy. This effectively excommunicated many South African Reformed Christians. I am not suggesting that such should never happen. I applaud and admire the Catholic bishop in New York who refused to serve communion to the South American emissaries of bloody dictators in the 1970s/1980s.

But what I am experiencing now, in our America—“one nation under God”—is a total lack of willingness even to engage in dialogue with Christians on the wrong side of the political divide. Insofar a they are perceived to be on the wrong side, whether they really are or not, they are being rejected, “unfriended,” canceled.

Please know that I am not opposed to the prophetic role of the church toward government and toward politicans. What I am opposing here is demonizing fellow true believers in Jesus Christ as Lord and Savior only because they lean toward the Republican Party or the Democratic Party. This situation is a scandal that must break the heart of God.

I have no problem with a church taking a stand on ethical issues such as abortion, racism, poverty, gay marriage, etc. What I have a problem with is the hatred being expressed toward those who disagree. It is palpable. Anyone who haunts social media has seen it. Of course, hardly any Christian would admit that they are being hateful, but the language being used and the tactics being practiced toward their political enemies—even friends and family members—reveals hatred in the heart.

What we American Christians need to do now is stop, take a breath, call a moratorium on hate speech toward and rejection of (at least) fellow Christians only on the basis of political views. We need to call for civil discourse and dialogue in place of turning backs and hurling epithets under our breaths (or on social media) against those “others” with whom we share devotion to Jesus Christ. This is my word to pastors and church leaders of all Christian denominations. Do it now.

Be Careful What You Ask For
Preventing Grace
Related posts from Roger E. Olson

Evangelical
A Test of the Authenticity of Your Christianity
Roger E. Olson

Evangelical
Review of "That All Shall Be Saved" by...
Roger E. Olson

Evangelical
Can One Be an Evangelical and Roman Catholic?
Roger E. Olson
TRENDING AT PATHEOS Evangelical