A Theology for the Twenty-first Century

A Theology for the Twenty-first Century December 3, 2020 Roger E. Olson

A Theology for the Twenty-first Century 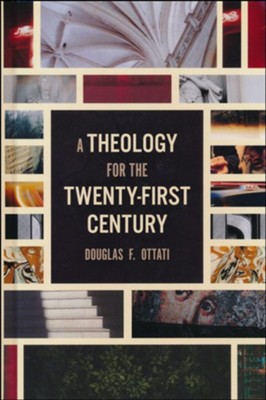 What am I reading now? A Theology for the Twenty-first Century by theologian Douglas F. Ottati (Eerdmans, 2020). It’s a new 770 page systematic theology described by the author (a Presbyterian theologian) as “Augustinian, Protestant, Liberal, and Humanist.” The volume consists of 70 propositions expounded and defended—using the Wesleyan Quadrilateral as method. (Yes, both the author and I “get” the irony of a Presbyterian using the “Wesleyan Quadrilateral,” but we both also know that it is not unique to Wesleyanism. Probably all contemporary theologians use these four sources and norms—scripture, tradition, reason, and experience.) If I may say so, even though I am only on about page 288, Ottati relies more heavily on “experience” than scripture or tradition. The “finger prints” of Friedrich Schleiermacher and later liberal Protestant theologians such as Ritschl, Herrmann, Troeltsch and Kaufman are all over this system.

One of the strengths I have found so far is Ottati’s defense of systematic theology. He rightly points out that all human thought, at its best, strives toward coherence. On the other the hand, he is not a slave to absolute consistency insofar as that would rule out mystery. He does strive to exclude sheer contradictions and that is all to the good.

One thing that is troubling me so far is Ottati’s seeming avoidance of the issue of truth. I’m sure he would not agree, but it seems to me that his main concern is pragmatic. For him, so it appears, theology’s main task is not to explain but to guide. Guide toward what? Good pastoral practices, good Christian attitudes and dispositions, and good Christian conduct. He relies heavily on what I call “symbolic realism”—that what God has given us in revelation are symbols, images, that transform. One such is, of course, the cross. But even “God” is a symbol. What I am missing (so far) is any firm affirmation of historical reality in which the symbols are solidly rooted.

Ottati is unapologetically liberal in his approach to theology and he describes that approach very well. He is not an “accidental liberal.” But he is also not entirely accommodationist to modernity or to culture. His approach to scripture, tradition and culture is critical openness. Change of belief is always possible. Theology must be continually self-critical and open to challenges from secular culture.

At this point in my reading of the volume, however, I am not sure that any secularist would strongly disagree with anything Ottati says (so far)—if they “get” that he is talking to Christians about proper and appropriate Christian attitudes, feelings, dispositions and ways of being in the world.

For him, certain Christian symbols, arising out of the mythpoeic images of revelation, call forth imaginative models of believing about reality and ways of living in the world. For example, Christians “see” the world “as” created and governed (not controlled meticulously) by God. And this image of God and the world should result in care for the creation, the environment. Ottati is clearly concerned with overcoming any notion that humanity is the “crown of creation” given a mandate by God to exploit the rest of nature. He even goes so far as to suggest that humanity, like most species, is destined to become extinct and is not elevated in value above other animals. Yes, humans have special “gifts” that are to be used for the good of the rest of creation, but humans are not the reason for creation. Not only is it likely, according to Ottati, that humanity will cease to exist; the earth will probably some day be destroyed in a fiery explosion from the sun. At least that is the latest thinking of science about the earth’s future.

While I am enjoying reading A Theology for the Twenty-first Century I am so far dismayed by two main things. First, it seems to me that Ottati does not think theology explains things that cannot be explained by the sciences. It seems to me that Ottati regards theology as therapeutic in the broadest sense of offering people symbols and images that transform them from despair or complacency into hope and transforming initiatives for the good of all creation. Second, I cannot yet tell whether Ottati actually believes in the historical reality of the events described in the Bible such as the exodus and the resurrection of Jesus Christ. Perhaps I will be enlightened more about that later and I am keeping an open mind as I go.

I am looking forward to Ottati’s Christology because, for me, anyway, a theologian’s Christology is defining as to whether he or she is really a Christian theologian. However, one sentence on page 128 worries me. There the author says that “Scripture will be interpreted [here, in this book] as it is configured by the suggestion redemption-in-Jesus-Christ.” (Italics added) “Suggestion?” That way of phrasing the person and place of Jesus Christ in scripture puzzles me, to say the least.

I will blog more about A Theology for the Twenty-first Century as I continue reading it. If you are as interested in contemporary Christian thought as I am, you might want to purchase your own copy and read it along with me and enter into conversation with me (and others here) about it.

November 29, 2020
Why John Piper Does Not Want Me to Be a Calvinist
Next Post

That's Not How Any Of This...
Preventing Grace
Related posts from Roger E. Olson

Evangelical
What Is the Essence of Christianity? Part 2
Roger E. Olson

Evangelical
What Is the Essence of Christianity? Part 1
Roger E. Olson
TRENDING AT PATHEOS Evangelical