On Not Making a Religion of Politics

On Not Making a Religion of Politics January 27, 2021 Roger E. Olson

On Not Making a Religion of Politics 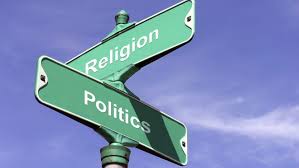 My observation is that many Americans are making a religion out of politics. That is, they are putting into political activism, even if only on social media, the passion that should be reserved for religion. To be even clearer and more specific, for many people, many Christians included, what Paul Tillich called “ultimate concern” is being invested in political commitments and endeavors. This is a kind of idolatry. Again, to paraphrase Tillich, only God deserves our ultimate concern and whatever we invest our ultimate concern in is our god.

It is one thing to be passionate about politics in the right way—penultimately (to use Dietrich Bonhoeffer’s phrase for that which is secondary); it is something else entirely to invest your whole interest and passion in politics in the wrong way—ultimately. The evidence is clear on social media: many Christians are spending much more time and effort and attention on and investing much more passion in their political beliefs and fears and commitments than on/in the kingdom of God which ought to come first. And the kingdom of God clearly transcends partisan politics. No party or nation is the kingdom of God. And yet you would not know that from the way some Christians speak and write and act.

Political idolatry is spreading like wildfire across America. People are breaking up families and churches over their political beliefs and convictions. Anyone who does not agree with them about politics cannot be authentically Christian and cannot be their friend—even if they are brothers, sisters, mothers, fathers, aunts, uncles, cousins, grandparents.

As someone who has studied cults and new/alternative religions in the U.S. for decades, I have to say that some Christians devoted to Trump and the contemporary Republican Party are acting exactly like members of a cult. If the shoe fits, wear it. If it doesn’t, don’t.

I watched a believer in the QAnon Conspiracy interviewed on television. The morning of Biden’s inauguration he insisted that it would not take place. Afterwards, he was downcast and discouraged and disillusioned. He gullibly bought into a cult-like conspiracy theory that is not supported by any evidence or reason or even divine revelation. Only a complete lack of critical thinking could lead someone to believe it.

The QAnon Conspiracy theory is one example of the social hysteria I wrote about here earlier. It reminds me of the Satanic Panic of the 1980s. Back then I was teaching a college course about American’s Cults and New Religions. (It was an elective course so to draw students into it I advertised it as a course about “Unsafe Sects.”) I studied all the social science materials about cults and interviewed numerous cult members. I visited cults’ headquarters and interviewed some of their leaders. I invited many of them into my class to speak and answer questions. I joined a professional society of scholars who study cults and new/alternative religions in the United States. I read papers at their meetings and two of those papers were published—one in a book published by SUNY Press.

During the Satanic Panic phenomenon I actually met smart men and women who believed that some of the “pilgrim fathers” who came to the New World from Great Britain on the Mayflower were Satanists who planted Satanism here and that it is nearly invisible only because Satan hides its evidence. They claimed that whole towns were caught up in Satanism, sacrificing animals and human beings and that this evil was spread out across America and the whole world.

One thing became surprisingly clear to me—that some smart and successful people fall into a state of delusion, believing in and committing themselves to simply outlandishly absurd belief systems that were clearly invented for the purposes of power and money. They could not be talked out of that.

Shall I give examples? I won’t name any organization, but over the years I have personally known people who belonged to a religion that calls itself Christian but denies the very reality of matter, sin, sickness and death. It’s all illusion. And yet they all die. Predictably that religion is slowly dying out. All evidence is against it.

Another organization or network of churches that considers themselves Christians virtually worship an evangelist who died about fifty years ago. Followers have framed copies of a photograph of him in their homes. In the famous photograph he is preaching and a halo of light seems to be hovering above his head. Many of them believe he was the predicted prophet who would foreshadow the return of Christ. They believe they are the remnant of true Christian believers who alone will be raptured.

Many American Christians are falling into that same delusional state and falling into idolatry by placing a political leader and an ideology (if it even counts as that) on a pedestal equal with God in terms of ultimate concern. Instead of talking about God and Jesus Christ and the gospel of free grace and the kingdom of God that transcends human political entities they spend all of their time and effort promoting a man and the ideology surrounding him and a political party and sometimes even an absurd conspiracy theory somehow tied to those.

These people need to be challenged by their pastors. Christians who find that their pastors are this way need to challenge them and if they are unsuccessful—leave the church.

A massive delusion has gripped the minds and hearts of many American Christians and it is near-idolatrous if not blasphemous. It is the job of Christian theologians such as I am to challenge it, to name it for what it is, and to call it out. That is why I write this. Let him or her who has ears, hear. Hell awaits anyone who places anyone or anything alongside or above God in terms of their ultimate concern. That is traditional Christian doctrine, not just my opinion.

January 25, 2021
My Deep Disappointment with Franklin Graham
Next Post