Authoritative vs. Nurturant Styles of Religion

Authoritative vs. Nurturant Styles of Religion 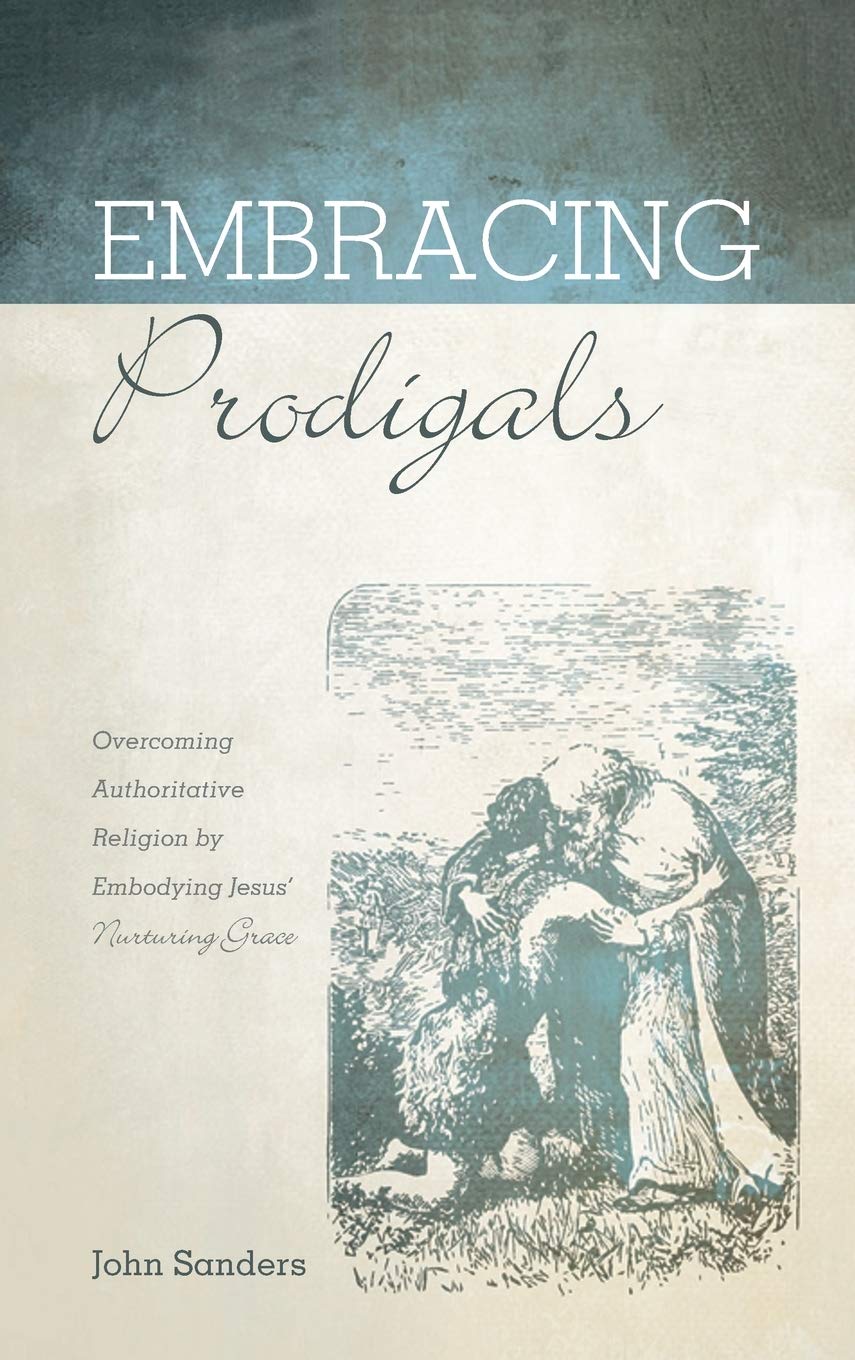 Occasionally a friend (or even a stranger) sends me a book they have written and want me to read and possibly review here. Recently arrived is Embracing Prodigals: Overcoming Authoritative Religion by Embodying Jesus’ Nurturing Grace by my friend John Sanders (Cascade Books, 2020). It’s an excellent little book for individual enrichment reading or for use in a book group or church group—for discussion.

According to John, “authoritative religion” is a style of religion that is afraid of ambiguity, new ideas, questions about accepted traditions, etc. It tends to punish those who dare to question or doubt. “Nurturant religion” does not go to the opposite extreme of doubting everything, or even encouraging doubt, but responds to doubts and questions with warmth and embrace rather than exclusion. (John mentions Miroslav Volf’s excellent book Exclusion and Embrace a couple times and I detect its influence on his thinking. If you’ve ever wanted to introduced Volf’s thoughts to a group but hesitated because his book is too academic, consider using John’s book.)

Rather than review John’s book any further here (my experience is not many of my readers respond well to book review!) I will just comment on John’s idea of two styles of religion—“authoritative” and “nuturant.”

First of all, I recognize these two styles; I have experienced them “up close and personal.” And, with John, I would describe them as styles or postures, not as closed attitudes or approaches to religion. Many religious people are paradoxically both—nurturant and authoritative—when it comes to dealing with “prodigals” in their midst—meaning students, church members, family members, colleagues, etc., who dare to express doubts about accepted traditions or new ideas unfamiliar to the group or its tradition.

Second, however, I would prefer to describe these two postures as “authoritarian” and “nurturning.” Its only a slight change of words, but “authoritative” and “nurturant” just don’t sound quite right to me. For one thing, I think religious leaders should be authoritative but without being authoritarian. “Authoritative,” to me, could simply indicate knowing what one is talking about—not being “wishy-washy” or relativistic. Jesus was certainly authoritative in some situations. “Nurturant” just doesn’t sound like a word to me. “Nurturing” sounds better. So I will use “authoritarian” and “nurturing” for the two styles or postures John is talking about in this book.

Clearly, John prefers the nurturing style and so do I, but I would suggest that one can be both nurturing and authoritarian—depending on the context. However, when a person is authoritarian all the time, towards everyone, then I tend to avoid him or her. So, as a style, I also opposed “authoritarian.” Nurturing is always the best way to respond to someone who is open to correction even if he or she is certainly wrong.

I take it that John’s biography lies in the background of this book and he offers several illustrations of the two styles from his own life—as a student and as a professor. (John taught theology at some Christian institutions that I will leave unnamed here.) But I could offer some of my own to illustrate the styles he is talking about and my own opinion that both styles can be useful and helpful in some situations.

When I was in college, the institution itself—from the top down—adopted the authoritarian style. I remember when two of my roommates dared to approach the president about some very serious problems in the college that affected all of the students he laid hands on them and prayed for the demons to come out of them. He didn’t address their concerns at all. The very fact that they were raising concerns was evidence that they were being controlled (at least at that moment) by demons. Most of my classes were taught in authoritarian style; most of the chapel speakers were authoritarian. There was a general atmosphere of oppression of students and teachers who dared to question anything preached in chapel or done by the administration. And many of the teachers spiritually abused students who dared to ask any questions that implied doubt about what was being taught. (And much of what was being taught was utter nonsense.)

That’s authoritarianism. But when I matriculated at an evangelical Baptist seminary I encountered the nurturing style. I remember my shock the first time I saw the seminary’s president just hanging out with students in the lounge-dining center, laughing and joking with them. At first I was hesitant to raise any questions, but I soon learned that it was definitely okay. I was encouraged to ask anything and all my professors (except one adjunct professor who was a very well-known Calvinist pastor on sabbatical from his very well-known church in Philadephia!) handled my questions in a nurturing style—answering them with right authority but without any hint of shame or spiritual abuse. Sometimes they just said “That’s a good question; I don’t know but let’s talk about it.” Even when they disagreed with something I said they handled the situation in a mature, nurturing style: “I think you’re wrong about that and here’s why, but I defend your right to think your own thoughts about this.” One even said to me “I will defend to the death your right to be wrong”—with a hearty chuckle.

This is where being authoritative and nurturing came into my experience and I have tried to emulate that combined style in my own teaching of theology. There are times when I am authoritative without being authoritarian. In other words, if a student (or anyone) says to me: “The church fathers did not believe in the deity of Christ or the Trinity until Constantine in the fourth century” I will authoritatively correct him or her but without shaming or ridiculing. Students want me to know my subject. I am an authority on some subjects. Even when I have to exercise my authority, however, I try to do so in a nurturing way. I don’t just say “You’re wrong and that’s all, and you should be ashamed for even saying [or asking] that!”

There are times, however, when we religious leaders and teachers have to exclude a person from our circle shaped by a tradition. That person will feel that we were being authoritarian even if we did our best to be nurturing first. A student told me that he was an atheist. I asked him why he was in a Christian institution that required students and faculty to be confessing Christians and he said “I’m just continuing my education.” Eventually he left and then represented the situation as our authoritarianism. Should we have been endlessly nurturing toward him—within that context? I say no. There comes a point when someone has to be excluded. He or she will always feel and possibly claim that those who excluded him or her were being authoritarian.

So, the one thing I want to add to John’s otherwise excellent book is that these two styles are somewhat subjective—at least some of the time—in that people get interpreted as either authoritarian or nurturing based on how a person feels about how they treated them. I am not saying that authoritarian and nurturing styles are always “only in the eye of the beholder,” only relative or subjective. I think they are really two different styles of relating to “prodigals”—those who, within a community shaped by a tradition—but I think that 1) one person or institution can and probably should combine them depending on different situations, and 2) they can be wrongly interpreted—with “authoritarianism” being projected onto a person or institution by someone who feels he or she was wrongly treated.

But this is where John’s terminology comes back into the picture. I think being “authoritarian” is usually problematic while being “authoritative” is sometimes justified. That’s a distinction I would make while acknowledging that the two can be confused—especially by someone who feels he or she has been a victim of shaming or wrongful exclusion.

I finish with this personal comment about me and my blog. I feel no need to be nurturing here—toward visitors who comment in a hostile manner. I try to be nurturing towards those who ask honest questions and express honest doubt, but toward those who flame here, who come here as trolls only, attempting to take over my blog for their own alternative views, misrepresenting what I actually said (for example), I do not feel any need to be nurturing. Toward them I feel justified here in being authoritative and even authoritarian insofar as they are violating my clearly stated rules for this blog.

April 12, 2021
Who Is A "Progressive Christian" and How Is That Different from "Liberal Christian?"
Next Post