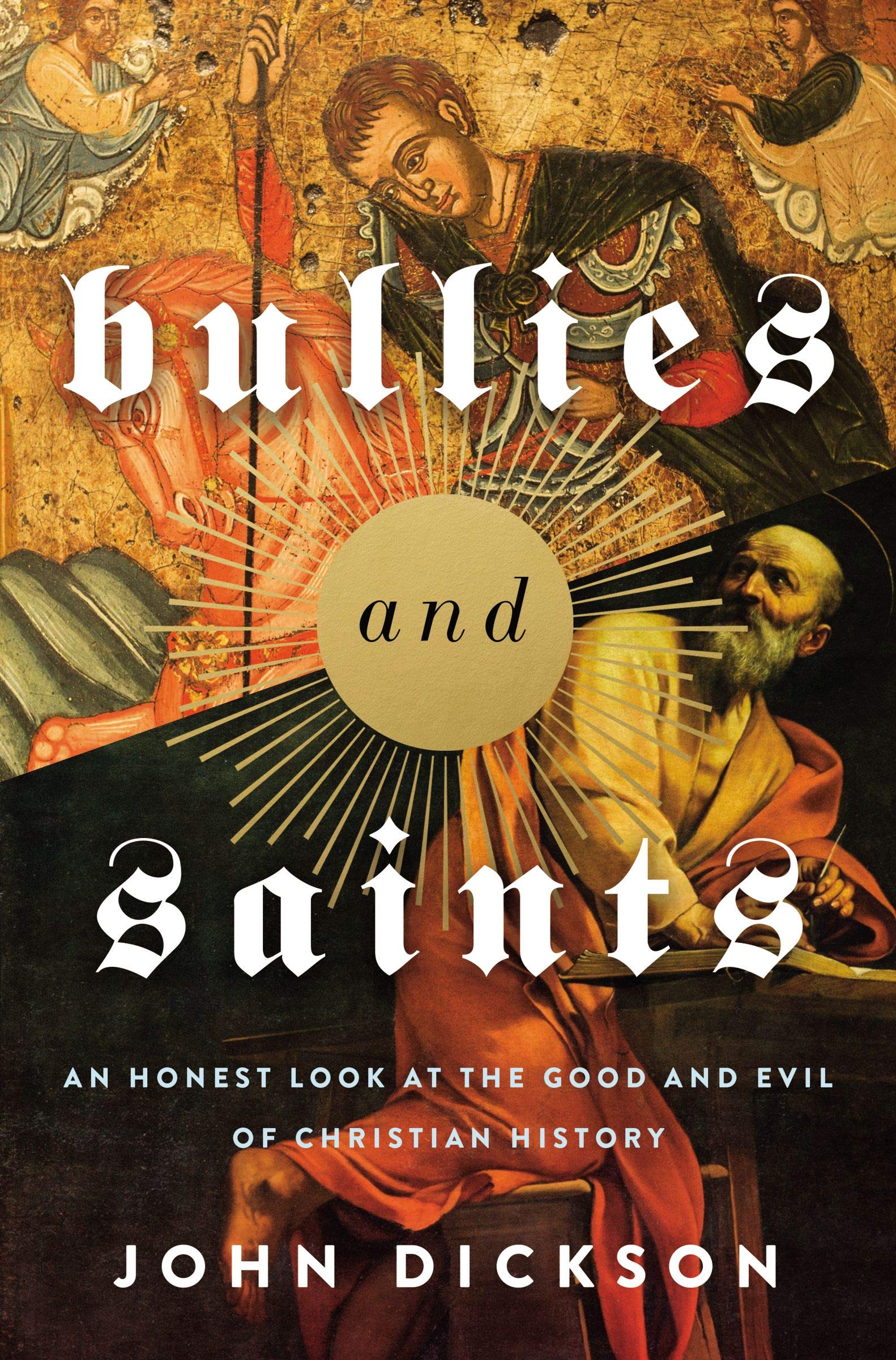 I recently received in the mail, unexpected, a complimentary copy of a new book published by Zondervan, one of my publishers: Bullies and Saints: An Honest Look at the Good and Evil of Christian History by John Dickson (Visiting Academic in the Faculty of Classics at Oxford University and Distinguished Fellow and Senior Lecturer in Public Christianity at Ridley College, Melbourne, Australia). First, let me say “thank you” to Zondervan for sending this beautiful, boxed book to me. I have thoroughly enjoyed reading it even though I have some qualms about its main argument.

Second, I have to mention that author Dickson is an Anglican which, to me, anyway, makes a big difference in terms of my interpretation of the book and its main argument. Others may not recognize this as a root of my disagreement with Dickson and his argument. But, to me, anyway, it’s very important. I’ll explain more here.

Third, this is a beautiful book, extremely well-written, and worthy of wide readership. It’s an exercise in Christian history and you will learn much by reading it. I highly recommend it. Please don’t allow anything I say here deter you from buying and reading it.

In a nutshell, the argument of the book is that Christianity has, throughout much of its history, perpetrator terrible horrors on people. Or, perhaps better stated, Christians have done that. The author wants to take an honest look at Christian history and not whitewash it. He wants to admit, in great detail, the terrible things that many Christians have done and not sweep them under the rug, so to speak, as he thinks many Christian historians and apologists have done. The book also includes the stories of Christian saints, people who have done great and wonderful things in the name of Christianity (or in the name of Jesus Christ).

You really ought to read this book and make up your own mind about its central argument and whether you agree with Dickson or me. Our divergence is deep and profound. Here follows my “take” on this well-intentioned but misguided exposé of Christian terrors.

Perhaps unlike Dickson, although I cannot say for him, I was raised in a branch of Christianity that emphasized often and vehemently that the vast majority of people who have called themselves “Christians” throughout the ages, including now, are not true Christians. We called them “nominal Christians.” I well remember a discussion of the medieval crusades in a high school class. My teacher and some of the students used those horrible “holy wars” launched by emperors and popes who called themselves Christians as evidence that Christianity itself is deeply flawed. I spoke up—from the only perspective I knew personally—and stated unequivocally that those people who perpetrated the massacres of the crusades were not real Christians. A favorite saying among us was “Just because you’re in a garage does not make you a car.” Trite, yes, but memorable also.

Although I did not grow up in an Anabaptist church, our church’s and denomination’s ethos was somewhat like that of Anabaptists. (I have often referred to my home church, the church of my childhood and youth, as “urban Amish.”) When we, my family and I, drove by churches not at all like ours, I sometimes asked my pastor father to say something about them. Frequently he said “It’s not a true Christian church even if the sign says it is.” We were taught and believed that most people who called themselves “Christians” were false Christians at best.

Dickson sweeps this explanation off the table near the beginning of his book and argues that it cannot be used to defend Christian atrocities throughout history. These atrocities, such as the crusades and the Inquisition, were committed by Christians. Period. This is where I disagreed with his basic premise. To this day, as a proud sectarian Christian, non-catholic, together with most Anabaptists, Pentecostals, Holiness Christians and others, I deny that anyone who committed atrocities “in the name of Jesus Christ” was a true Christian whatever they claimed.

Does Dickson’s Anglican identity and my (roughly) Anabaptist-sectarian identity have something to do with this fundamental disagreement? I think so.

I take no responsibility for the crusades or the Inquisition or for any other of the atrocities committed by self-identified “Christians” in the name of Jesus Christ throughout history.

Who can seriously doubt that there have been false Christians throughout Christian history? The New Testament itself says so! The earliest church fathers said so! The reformers said so! I am not the only one saying so. And I still believe this is our best defense against those who, like my high school teacher and fellow students, would blame Christianity and Christians for numerous atrocities throughout history. “Those so-called Christians ‘bullies’ were not real Christians anymore than Adolf Hitler was a real Catholic even though he was baptized into the Catholic Church and paid his church tax to the Catholic Church throughout his miserable lifetime.”

With all due respect to scholar Dickson and his book, I think our difference of opinion about this matter has something to do with his being Anglican and my being Anabaptist (leaning).

True Christians have always been a “remnant” even among the masses who called themselves “Christians.” I admit it, still to this day, in my late sixties, after teaching theology for forty years, as I drive around cities and towns, I automatically relegate many of the churches I see and know about to the category of “nominal Christianity”—meaning “in name only.” This is my deeply ingrained “sectarian,” “true Christian” (if you will) attitude toward the majority of churches and their ministers and members.

I often think to myself that nobody should really call themself (to invent a word) a “Christian.” I remember a song from my youth: “Lord, I want to be a Christian in my heart….” Being a true Christian is an aspiration, not a settled identity. A Christian is a person who actually lives a Christ-like life. Who can claim that? Even John Wesley sometimes said that he was not a Christian. What did he mean? Obviously that he was striving, with the help of the Holy Spirit, to live up to the high calling and high standard of Christlikeness.

Yet, there always have been people who not only fell short of that, but who lived lives so contrary to the way of Jesus Christ that they cannot fairly be considered true Christians at all. They deserve to be called “false Christians,” “Christian pretenders.” British Baptist preacher Charles Spurgeon called them “mere professors”—people who merely “professed” true faith in Jesus Christ.

By-and-large, the Anglican churches, worldwide, have sought to include as many people as possible within the “fold” of Christians and have not worked to exclude from their churches false Christians. Their ideal has traditionally been a kind of union between culture, even population, if possible, and church membership. This is anathema to “my Christian tribe and ethos.” We are believer churches rather than mixed assemblies. Surely that ecclesiological difference must have something to do with my disagreement with Dickson. Read his book and see what you think. I highly recommend it.

June 15, 2021 What Is Christian Mission without Any Call to Conversion?
Recent Comments
0 | Leave a Comment
Browse Our Archives
get the latest from
Roger E. Olson
Sign up for our newsletter
POPULAR AT PATHEOS Evangelical
1