Thoughts about Denominational Divisions (What They Are Really About)

Thoughts about Denominational Divisions (What They Are Really About) 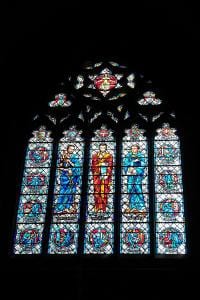 *Note to would-be commenters: Know that this is not a discussion board; this is my space to express my thoughts and enter into constructive discussion with fellow evangelicals and others who want to ask questions. If you choose to comment, make sure your comment is relatively brief, about the subject of my post, civil, kind and respectful, and does not include any links or photos.*

All over the USA denominations are splitting up. There’s nothing new about that. Many denominations are break-aways from older denominations. But such divisions make the news mostly only when questions of church property come to courts. In recent years such cases have come before state supreme courts (and other courts) and they have been about two main denominations: The Episcopal Church (USA) and the Presbyterian Church USA. In both cases churches wanting to leave the national denomination have had to go to courts to keep their property because the property is “held in trust” for the national denomination or its local diocese or synod/presbytery. The United Methodist Church is about to go through similar convulsions (perhaps in courts) over the rise of the new Global Methodist Church. In all three so far mentioned denominations, local congregations do not hold title to their church properties even when they do not owe any money to the denomination. The denominations holds the titles.

In 2021, however, the Supreme Court (SCOTUS) declined to hear an appeal brought by a diocese of the Episcopal Church (USA). The Texas Supreme Court had decided about a decade earlier that the congregations in Fort Worth could keep their properties even as they left the national denomination. All over the country Presbyterian churches have been challenging the “property held in trust” rule and have been leaving the national denomination and joining a newer one called ECO.

Now to the point of this post: Why are churches of most so-called “mainline Protestant denominations” leaving them? (I like church historian Martin Marty’s preferred term “old line denominations.”) The media make it out that the conflict is ONLY about gay marriage. As a church historian and expert on American denominations (I am the author/editor of the 14th Edition of the Handbook of Denominations in the United States) I can tell you without doubt that the conflict is much deeper than that. The issue of gay marriage is only the proverbial “straw that broke the camel’s back.”

The real issue is theology. The old line denominations have by-and-large adopted “theological pluralism” in which ordained ministers and leaders do not have to believe in the denominations’ stated orthodoxies. In fact, in many cases, some ministers of old line denominations do not believe in the deity of Jesus Christ (except in a purely symbolic, not ontological, sense), the Trinity (except as three ways of experiencing God or three ways God reveals himself), or the bodily resurrection of Jesus Christ or any miracles. Many of them are avowed universalists.

The media like to make it out that the breaking away groups are fundamentalists which is not the case. In most of these cases (there are some exceptions) the breaking away groups believe in women’s ordination, women pastors, women leaders, and do not believe in young earth creationism or a literal future rapture (dispensationalism), etc. They are not fundamentalists even as they are being depicted as such especially by the leaders of some of the denominations they are leaving.

To understand the deeper issue, please order and read my forthcoming book Against Liberal Theology: Putting the Brakes on Progressive Christianity (Zondervan, July, 2022).

I suspect, strongly, that even if the gay marriage issue had not arisen, these denominations would be experiencing divisions between liberals and conservatives. Unlike in the past, however, those leaving the old line denominations are not fundamentalists; they are moderate evangelicals who value basic Protestant Christian orthodoxy.

April 8, 2022 The Salvation of Infants
Recent Comments
0 | Leave a Comment
"This just triggers a memory. When I lived in Germany 1981-1982 I ran into numerous ..."
Roger Olson Jesus and the 20 Percent
"It’s a good question but I have to admit that I don’t know the answer. ..."
Roger Olson What Is “Progressive Christianity?”
"I look more at Paul’s admonition to Philemon to accept back his run away slave ..."
Roger Olson What Is “Progressive Christianity?”
"Yes, I have heard many Christian feminists/egalitarians talk about good masculinity by pointing to Jesus ..."
Roger Olson Jesus and the 20 Percent
Browse Our Archives
Related posts from Roger E. Olson