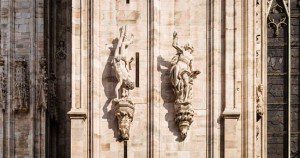 *Note: If you choose to post a comment here, make sure it is civil and respectful, not hostile or argumentative. Do not include any links or photos.*

American Christian leaders (to say nothing of other leaders) have often fallen off their pedestals; this is commonly termed a “fall from grace” when it should surely be called a “fall from favor.” American Christians have a tendency to place certain religious personalities up on “pedestals” of favor as if they are somehow more than mere human “sinners saved by grace alone.”

This did not begin with the televangelist scandals of the 1980s and 1990s. But because of media attention (e.g., “Nightline”) these televangelist scandals gave people the impression that something new was happening. What was new was the media spotlight shining on sinning Christian celebrities put on pedestals of popularity by their followers. This trend went on and goes on into the third decade of the twenty-first century.

Most recently the Southern Baptist Convention, the largest Protestant denomination in the U.S., released a scandalous report about Southern Baptist pastors and executive leaders who were known to be sexual predators and abusers by at least some SBC leaders but were never revealed as such by them. Thus, as in the Roman Catholic Church before, these predatory ministers were allowed to move around from church to church all the while preying on vulnerable women and/or children.

Some even within the SBC have called this scandal an “apocalypse” meaning it could bring down the SBC itself. I doubt that very much. But it may result in some SBC leaders who knew of such predators in their ranks and did nothing to stop them being sued or even going to jail. Probably the SBC itself will be sued by victim survivors.

*Side note here: I prefer not to discard the term “victim” in favor of “survivor” simply because that tends to diminish the perception of damage done to them.*

Now to my proposed solution—not to the phenomenon of sinning religious leaders but to people’s reactions to their falls from favor (and possibly from grace).

I have met many Christians who have been seriously emotionally and even spiritually damaged by revelations about the scandalous secret lives of religious leaders they admired. What I strongly suggest is that Christians stop putting religious leaders up on pedestals. Admire whatever truths they communicate, but reserve emotional and spiritual attachment for Jesus only.

Only Jesus deserves to be on a pedestal.

Christians—stop admiring any persons other than Jesus. Know that all of them have feet of clay and are prone to sin just like everyone else. Only Jesus cannot fail. Old gospel song: “Jesus never fails; Jesus never fails. Heaven and earth shall pass away, but Jesus never fails.” That’s the chorus. The first verse begins “Earthly friends may prove untrue….”

Also, Christians—stop attaching loyalty to any human organization. I’m talking about a special kind of loyalty that often attaches to religious organizations and institutions. Stop it. Every one of them will eventually pass away even if only by changing so much that it is no longer continuous with its past. Not one is the Kingdom of God itself. Every one will falter and fail. Only God’s Kingdom never fails. And Jesus and the Kingdom of God are inextricably linked.

Do not be surprised when your favorite evangelist, preacher, author, speaker, religious leader falls from the pedestal YOU (and others) have WRONGLY put him on. (I say “him,” but it could also be “her.” I could mention two twentieth century women evangelists who fell from the pedestals their ardent followers put them on. But I will refrain from naming any names here.)

Taking my advice will mean a huge adjustment for many American Christians. I am pessimistic about it happening. But I put it out there for everyone’s own good and for the good of the gospel and the Kingdom of God. Stop putting anyone except Jesus up on a pedestal as incapable of falling into serious sin. Stop putting any organization except the Kingdom of God (if it can be called an organization) up on a pedestal as incapable of being exposed as filled with corruption.

Again, an old gospel song: “Turn your eyes upon Jesus….” Only Jesus should be on a pedestal in your life; no one else deserves that and putting anyone else up on such a pedestal sets you and maybe them up for a huge disappointment and disillusionment and a fall. My point is that MAYBE the very act of lots of people putting a person (other than Jesus) up on a pedestal contributes to his or her fall from it.

So what are Christian leaders good for? ONLY for what they communicate and possibly how they lead people into God’s Kingdom. They are NOT good for their celebrity status. So what are Christian organizations and institutions good for? ONLY for their ability to bring people together to collectively bring forth, with God’s help, some anticipatory manifestations of the Kingdom of God. But ALL—leaders and organizations and institutions are but “broken vessels” God possibly uses for a time. None are worthy of uncritical adoration and loyalty.

June 3, 2022 It’s Friday But Pentecost Sunday Is Coming!
Recent Comments
0 | Leave a Comment
"As I said, if someone believes in the rapture as a matter of opinion, I ..."
Roger Olson Why I Do Not Believe in ..."
"I’m sorry, but layers of coal from decayed rain forests could not have been caused ..."
Roger Olson Why Not “Against Fundamentalism?”
"They would have said (and often did when challenged) that most of the countries in ..."
Roger Olson Is America Worth Celebrating?
"Dr. Olson,I hope you will overlook the length of this post....I do believe in a ..."
conversantme Why I Do Not Believe in ..."
Browse Our Archives
Related posts from Roger E. Olson