How Did the Christian Bible Come To Be?

How Did the Christian Bible Come to Be? 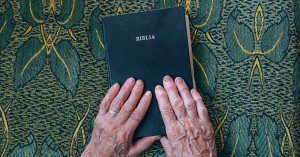 *Note: If you choose to comment, please follow these guidelines: Keep it relatively brief (no more than 100 words), on topic, civil and respectful in language (not hostile or argumentative), and void of links and photos. Please do not attempt to misuse my blog to promote your own, alternative beliefs system.*

One of the questions I’m asked most often is how the books of our Bible(s) were collected into them. That is, how was the canon formed? Of course, most people who ask don’t know the word “canon” and if they do, they misspell it “cannon” (if they are writing to me and it may be that their spell checker automatically changed it). It is “canon,” not “cannon.”

”Canon” means “instrument of measurement.” So a yardstick is a canon used by non-metric system users. In this question, “canon” means two things: 1) How the books of the Bible were assembled as sacred scripture, excluding others, and 2) The Bible as the instrument for “measuring” beliefs.

Many huge tomes have been written about this subject. One of my seminary professors, Lee McDonald, has written two or three of them and is a leading scholar in this area of biblical studies and theology.

I have read many books and articles that attempt to answer the question and have found a lot of disagreement.

First of all, of course, many conservative Christians (and I assume Jews) simply believe God assembled the canon of scripture as in “That Manuscript from Heaven” (the title of a book I once saw in a fundamentalist bookstore). That view, however, lacks any historical consciousness and is dishonest with regard to the facts even if one DOES believe, as I do, that God GUIDED the men and women who composed the canons of the Old and New Testaments.

Second, there is, of course, real disagreement among Christians about the Old Testament in terms of how many and what books belong in it. The so-called “Apocrypha” (a Protestant term) contains more or less 15 books that Eastern Orthodox and Roman Catholic Christians, and a few Anglican Protestants, believe were inspired by God. But even among them there is disagreement about their authority for doctrine.

Third, there is a belief, now much debated, that the extent and content of the Hebrew Scriptures, what Christians call the Old Testament, were decided by a convention of Jewish rabbis in about 90 A.D. at a place in Palestine called Jamnia. As I said, many scholars now doubt that. But if not then and there, when and where? Jewish and Christian scholars do not agree about that. But the point is that sometime, somewhere, most Jewish leaders in the Roman Empire (and perhaps elsewhere) decided NOT to include the approximately fifteen books Protestants call the Apocrypha and that is one reason why Luther and Calvin and other Protestant reformers excluded those books. They were included in the Septuagint (the Greek translation of the Hebrew Scriptures), but ultimately they were excluded by most Jews as historical books but not scripture. (There are always exceptions to virtually anything I say here, so please don’t jump in with “I know a Jewish person who believes the books of the Maccabees are inspired!”)

Fourth, most people who ask me this question are concerned about the Christian canon, the New Testament, more than the Hebrew canon (which Christians also accept as scripture). “Why were some books excluded?” A new wave of concern over this began with New Testament scholar Elaine Pagels who argued that excluding some books from the New Testament was a mistake. Popularizers like Dan Brown and others have picked up on that and claimed that some of the second century “gospels” and other writings were excluded for political reasons, such as preference for books that promoted gender difference.

Fifth, to begin to understand the canonization process, one has to look at the books that many second century and later Christians considered inspired scripture but that were excluded when the final canon was adopted by the Christian bishops of the Roman Empire in the late fourth century.

Sixth, to begin to understand, one has to know that there were lists of inspired New Testament, Christian scriptures, individual books, as early as the second century. Some of them excluded anything Jewish, especially the so-called Muratorian Canon that reflected the controversy over the teachings of heretic Marcion who believed, among other things, that Yahweh was not the God of Jesus Christ.

Seventh, the majority of the books in “our” New Testaments were accepted as inspired scripture by the leading second century Christian writers and leaders. Some that eventually “made it into” the canon were debated for centuries. Different churches had different canons. Some wanted The Shepherd of Hermas included; many did not. Read it and be glad it was excluded! It says that God will only forgive a person of one sin after baptism.

Ninth, much of the controversy revolves around the so-called “Gnostic gospels” which are numerous. Some of them we have and some we only know about from the writings of second century Christian leaders like Irenaeus. If you really wonder why they were not seriously considered as scripture by the heirs of the apostles, read them. I have read them. They are shockingly UNLIKE the writings of the apostles and their heirs such as Ignatius and Irenaeus. They reflect a different religion from apostolic Christianity. If you disagree, well, maybe that’s because your religion is different from apostolic Christianity! (I warned everyone here that I would take off my gloves when I retired!:)

Tenth, we have this New Testament; it’s sufficient. If it’s not quite correct, if one or two books shouldn’t be in it or if one or two books should be in it—well, that hardly undermines the New Testament as sufficient for guiding us into a right relationship with God through Jesus Christ. I think too many people make a mountain out of a molehill over the question, for example, whether the Gospel of Thomas should be in the New Testament.