Thoughts about “You Are Gods” Chapter Two “The Treasure of Delight”

Thoughts about “You Are Gods” Chapter Two “The Treasure of Delight” 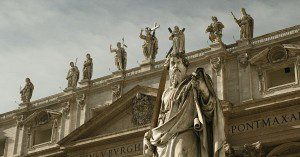 *Note: If you choose to post a comment here, make sure it is relatively brief (no more than 100 words), on topic, civil and respectful (not hostile or argumentative), and devoid of links or photos.*

Here are my thoughts about Chapter Two, “The Treasure of Delight: Nicholas of Cuba on Infinite Desire,” of David Bentley Hart’s book “You are Gods: On Nature and Supernature.”

This is a good example of one of my suggestions about reading a difficult book. Here is are the last two sentences of this chapter: “In Christ we see that the only possible end for any rational nature is divine because such also is its ground; apart from God drawing us from the first into ever more perfect union with himself, we do not exist at all. We are nothing but created gods coming to be, becoming God in God, able to become divine only because, in some sense, we are divine from the very first.” (34)

Now, stop and read that again. I don’t know about you, but if I read that in a book by a thinker associated with a pseudo-Christian or New Age cult I would consider it confirmation of that thinker’s heretical status.

But, this has to be read in light of the whole chapter and even the entire book. And Hart is NOT generally considered a cultist or heretic and I have found him to be a challenging Christian “conversation partner,” so I will withhold harsh judgment for now.

After all, remember, Athanasius famously said that God became man so that man may become God (paraphrased from memory).

Throughout this chapter, Hart is continuing his argument that rational thought itself points to a divine end of the thinker. “That hunger for the infinite as infinite, which can never come to rest in any finite nature, is also the only possible ground of the mind’s capacity for finite realities as objects of rational knowledge or desire.” (25)

Hart traces the line of Christian thinkers on whose “shoulders” he stands back to Gregory of Nyssa and on to Nicholas of Cusa and up to Maurice Blondel. I think he might have mentioned Catholic thinker Joseph Marechal (d. 1944). And what about Hans Urs von Balthasar? Anyway, clearly, Hart doesn’t think he is proposing something entirely new.

Also, in his defense, if he needs defending, in this chapter, including the final two sentences, Hart is expounding Cusa’s philosophy—epistemology and ontology—if not his own. The whole chapter is worded in that way. Except here and there, there are hints that he is speaking also for himself.

Now get this! On page 31: “Even God could not create a rational will not oriented toward deifying union with himself, any more than he could create a square circle…or a morally and intellectually competent supporter of Donald Trump.”

I think a major thesis of this entire book is this concise sentence on that same page: “‘Pure nature’ is an atrocity of reason.” What would “pure nature” be? Nature devoid of the supernatural, of grace. Nature not becoming God. The context seems to indicate that by “nature” Hart means “rational nature.”

So, again, in this book as a whole and in the Introduction and first two chapters, Hart is arguing against any separation of nature and grace. But isn’t he doing more than that? Hans Urs von Balthasar is well know for the same. Where is Hart transcending Balthasar if at all? Possibly in arguing that the human person’s “natural” end, “final cause,” is becoming God.

On page 32 Hart wrestles with the issue of ontological difference between us and God. I can’t quote even one brief portion of it here that would make any sense without quoting it all! And in it all, on that page, he is expounding Cusa’s ontology of God and humanity. It sounds very dialectical. “Difference” but “not otherness?” I wish Hart would just come right out and tell us if he believes the telos of a human person is becoming one with God’s essence (identity). He seems to be pointing in that direction without quite arriving there (yet).

I am still wrestling with Hart’s argument in this book. All I can say for right now is that it is invigorating but only because I have a kind of implicit trust that Hart is NOT gnostic or New Age or esoteric in his ontology. But this I know: an esoteric “Christian” thinker like Rudolf Steiner or one of his disciples would take great encouragement from what Hart has said so far. So MIGHT an  LDS scholar or leader. Hart is being bold to the point of danger.

August 29, 2022 Why “Orthodox” Rather than “Conservative?”
Recent Comments
0 | Leave a Comment
"Perhaps you could explain a bit more how this relates to materialism (or not)."
Roger Olson What Is Gravity? A Theologian Learns ..."
""My problem was not with confrontation but with the arbitrariness of many of the issues ..."
canoelover What Has Happened to the Evangelical ..."
"I think Jc means Ralph Reed and the Moral Majority. Kids smell hypocrisy a mile ..."
canoelover What Has Happened to the Evangelical ..."
"I would say that it does matter for a fuller understanding of our glorious Creator. ..."
Jon Xavier Evangelicals and the Trinity
Browse Our Archives
Related posts from Roger E. Olson