Is “Syncretism” Still a Valuable Concept?

Is “Syncretism” Still a Valuable Concept? 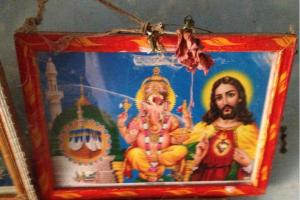 *Note: If you choose to comment, make sure your comments this relatively brief (no more than 100 words), on topic, addressed to me, civil and respectful (not hostile or argumentative), and devoid of links or photos.*

When I began studying Christian theology in college and then seminary, the word “syncretism” was bandied about quite a bit. It was considered a useful term and category even if it could be misused and often was. At least in Christian theology (broadly defined to include missiology), “syncretism” meant the inappropriate blending of non-Christian with Christian beliefs and practices. Most examples given were of Christians in non-Western or Latin American/Caribbean societies. One alleged example I remember discussing in a seminary class was of some Christians in Africa including ancestor-veneration in their Christianity. Allegedly, this sometimes included an elevation of the power and influence of ancestors in daily life and the need to appease them with various rituals.

That’s just one of many examples I read about and heard given in college and seminary classes taught by religion scholars and former missionaries or guest speakers who were missionaries. Syncretism seemed to be a major concern of U.S. missionaries to “foreign lands.” (Several of my close relatives were such.)

When I began my doctoral studies at a major non-religious university however, I discovered that “syncretism” was almost a dirty word. We were not to use it. Allegedly, according to some teachers, visiting scholars, and students,  the concept of syncretism was inextricably associated with white colonialism and religio-cultural imperialism. This negative attitude toward the word and the concept continued as I began my career of teaching Christianity at a Christian liberal arts college. Most of my colleagues in the “Cultural Studies” department (sociologists, anthropologists, linguists) did not like the term or the concept for the reason given above.

I remember a few attempted conversations with these colleagues in which I asked them if they would allow the use of the term and concept “syncretism” applied to American Christianity. I was doing that in my classes—pointing out the prevalence of various kinds of syncretism in American Christianity. (One example would now be “Americanism” as I wrote about it in the immediately preceding post here.) My cultural studies colleagues would not answer my question. It became clear to me that they thought so, but did not want to say so. The term “syncretism” itself, and the concept, was simply too “dirty” (harmful, corrupted, abused) for them to acknowledge as having any value.

My interest in syncretism was focused mainly on American culture and religion, especially American Christianity. But, if asked about a particular belief or practice outside the US, where it seemed to a student, for example, that Christianity was being blended inappropriately with some non-Christian religion or cultural belief or practice I would at least enter into that discussion and not dismiss it. Usually these conversations were brought up to me by international Christian students who told first-hand accounts of alleged syncretism in their home countries. THEY wanted to know what I thought. I would usually begin the conversation, after their question and anecdote, by asking what THEY thought. Then on we would go. Sometimes I did dare to label something outside US Christianity as syncretism, but my main effort was to get especially American (but really all) students to think critically about syncretism here, in our own country, among American Christians.

When I left that Christian liberal arts college and moved to Texas to teach theology at an evangelical seminary, part of a major Christian university, I continued that practice, custom or habit of challenging especially American Christians to turn the spotlight of examining alleged syncretism on our own society and Christianity here, among us, among them. I dared to suggest that in some places in the US football might be blended inappropriately with Christianity or even become a non-Christian religion adopted by Christians.

One Sunday I went to a small Texas town to hear one of my students preach at that town’s First Baptist Church. Because the university had won its football game the night before, the church service opened with singing the university’s signature football song. When the university built a new, very impressive football stadium, a regent of the university was quoted in the local newspaper as saying that “this” was the most inspiring thing that had ever happened at the university. I was shocked as I knew, and thought he must know, about the great “Student Revival” that began there in the 1950s. It was legendary around the university because it allegedly spread to many other universities. (Yes, I know there are several Christian colleges and universities that claim this nationwide student revival began there.)

I found that, in Texas, even many devout Christians admitted that football is a religion—there. That is, it is sometimes observed and celebrated with religious fervor that should be reserved for worship of God.

Yet, I noticed that even there, in that university, “syncretism” was a mostly otiose concept, a concept and term that carries so much stigma that hardly anyone uses it.

I continued to use and and continue to use it. I think it is a valuable term and concept without any useable substitute. Syncretism is real, virtually everywhere there are Christians. Real syncretism, as opposed to merely alleged but not proven, syncretism exists and one “job,” as it were, of Christian theologians is to point it out and call it what it is. That that “job” has been abused by some is not sufficient reason to drop the term or the concept entirely.

During my conversations with my cultural studies colleagues at the liberal arts college I was told by them that our ONLY job as Christians going into “unreached people groups” is to give them the Bible in their own language. How they interpret it is absolutely none of our business. I asked them if that is true here, in our country, in the US. That is, I asked them if it is appropriate for non-Americans to identify syncretism here, among American Christians, and call it out as bad. Again, I could not get an answer and the only reason I can think of is that they thought the answer should be yes but did not want to give any credit to the concept “syncretism.”

I do not think it is really any of my business, as an American Christian theologian, to go about identifying syncretism among Christians outside of America. I will offer an opinion if asked. But my job (among others) is to identify and call out syncretism here, among my own people, my own fellow American Christians. And I continue to do that here, sometimes, usually without using the word because I know it is like a red flag being waved in front of a bull. Among most non-fundamentalist Christian scholars of religion, the word and the concept it denotes has largely disappeared. I’m not convinced that’s a good thing. “The proper response to abuse of a good concept is proper use, not disuse.”