Fido at the Communion Rail

There is a Facebook page I follow, Things They Didn’t Teach Us in Seminary! There are a lot of United Church of Christ, Presbyterian, Methodist, Lutheran, a few former Catholics, as well as some others I haven’t doped out. Me, I’m ex-Lutheran pastor come home to Rome, yet I still remember lots and lots of stuff I never learned.

This was the topic: A pastor distributing communion at a conference gathering found himself confronted with a woman and her service dog. She adamantly insisted the dog was to receive as well, and in both kinds, bread and grape juice (many Protestants eschew wine, you understand.)

The pastor caved of course, though he harbored reservations. I can’t blame him for caving. Protestant clergy are as a whole a spineless lot and in any case, they rarely have anyone watching their back. When one’s salary is at the mercy of the latest or loudest critic in the congregation or, as I remember her with certain affection, The Wicked Witch of the West, there is much to be spineless about. Whatever it is such hapless pastors may have learned in seminary about doctrine, Eucharistic theology (assuming they were taught any), good pastoral teaching, pastoral care, and congregational discipline … it all just withers away, sliding down a greased memory hole they receive at ordination.

So pastors, the good ones anyway, learn to deflect. “Can’t,” he should have said. “The bread isn’t gluten-free.” I think that might have done have it. She, recoiling in horror, and the problem would have been solved.

The fellow reported to the FB group he was stunned by the request but, since it seemed to be really important to the woman that her dog be included in some way and, as the dog displayed fewer temperament problems than the woman, he gulped and communed them both.

Now he was seeking a little validation from other page members.

He got some of that but the 100+ comments revealed several levels of criticism, ranging from “grapes are bad for dogs” (that appeared to be a major problem for many respondents) to at least one “sacrilegious.”

I wish I had thought of that word but I didn’t. A doggie communion, I instead suggested, was “grossly disrespectful” of the doctrine of the Real Presence (claimed in some form or other by most Protestants) if not “altogether blasphemous.” Well, I really didn’t make it a suggestion.

I was experiencing a moment from the mid-1980s. I learned that a neighboring Lutheran congregation had used white sheet cake and champagne for communion elements, thinking to add some festiveness to a mortgage burning. That, incidentally, is when it first occurred to me there’d likely be Lutheran pastors in hell. If a pastor would consent to that for a mortgage burning, why not mark the next church picnic communion with Pepsi and Fritos? 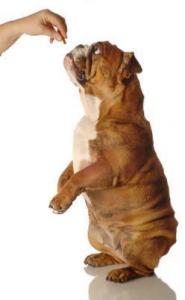 My remark – disrespectful blasphemy – prompted another guy complaining to me about my lack of inclusivity. Said he to me, “I think your position is grossly disrespectful of all God’s creation; I’m certain humans are no more beloved than Her other creatures.”

I’m thinking this guy thinks “Her” loves humans as much as but no better as, say, a  mosquito, a wombat or … well you can see where I was going. To a degree, of course, he is right. These are God’s creatures and we share creation together. But he doesn’t know how he is right, or even how wrong he is wrong.

The second chapter of Genesis contains what is called the “second” account of creation. I like the second one better than the first. God makes a human, an Adam from the adama (the earth). The word play – adam/adama – is unmistakable, and seeing the man’s loneliness (this is before Eve) God creates the animals from the same adama, the same earth. In Adam’s isolation God gives the animals to accompany Adam in life.

Our connection to the animals is only a degree of difference, but a huge one. Adam is of the earth but animated by the breath of God. The animals arise from the same earth, being formed by God. Both are direct creations of God, both under God’s care, but one lives by God’s very breath, the other by God’s providence through nature. One knows God in a way the other never will.

But it doesn’t end there. Adam is tasked with naming the animals, wild and domestic. The force of the text (Gen 2:19-20) suggests God did not know their names until they were spoken by the Adam. God brought the animals to the Adam “to see what he might call them.”

What God gave to humans, along the animating breath, is co-creativity, the assignment to name all the things of creation. This is a tremendous responsibility and, for good or ill, a fascinating potentiality.

Yet with that potentiality is special accountability in the use of it. It means among other things, we are creation’s voice before God. Only we can voice the gratitude of creation under God’s care as all eyes turn to him for their food (Ps 145:15), and only we can voice the misery of the animals as they die, for we are the only ones who know they will. God loves the animals for they are his gift to us. As gifts, we regard them with respect, affection, and remember our responsibility to them and never once pretend they are more than God intended.

All of which, I suppose, is to say – come the consummation of time – God likely has better plans than we can imagine for faithful dogs than them being communed by a temporarily befuddled Protestant pastor.

Render Unto to Ceasar ... What...
Public Catholic
Related posts from The Vatican II Lutheran