James J. O’Donnell’s Pagans: The End of Traditional Religion and the Rise of Christianity (2015) is not a silly book, but it is superficial. O’Donnell is said to have written a contrarian book on pagans and early Christians. We’ll see.

He does well describing the nature of traditional religion as Christianity (oddball and very non-traditional) arose in all its varied forms in its first three centuries to challenge traditional Roman religion.

What is amazing to me, now that I’ve brought it up, is how swiftly the variants of Christianity, generally known as “Gnostics,” became serious competitors to Catholic Christianity in the early years. What came to be known as “catholic” Christianity was obviously very different from the Gnostic alternatives. Though each was declared heretic (though more as a warning to Catholic Christians than as a threat of burning), some sects persisted for centuries and, with different names still persist. But in O’Donnell’s handling the Gnostics gets but a footnote. As he is writing about the demise of paganism, that’s not my real complaint.

What O’Donnell also does well in presenting the gods as they were known by the people themselves – in their piety and in their worship, in the practices of animal sacrifice and the exacting examination of their guts for portents and their deaths as offerings to the gods. There were then the home altars and all the wayside shrines. O’Donnell convincingly shows how all this gave shape to ordinary Roman life. But this is known too; there is nothing new.

Even less surprising is his assertion that “the pagans” was a term invented by Christians. “Pagan” originally referred to anyone who did not live in a city; it was the “Bubba” designation of its day used by the more urbane. It was even used as “civilian,” whenever the military got around to noticing there were civilians.

As religion goes, however, there were no pagans before Christians came along to say there were. “Pagan” cannot be defined except as against “Christian,” and even then it is doubtful if an actual pagan would be able to see himself as pagan.

Christians didn’t much use the word before 300 AD, is my impression. When it did come into common use by the fifth century, it was a matter of recognizing who practiced animal sacrifice (while pouring over their livers for signs of the gods’ favor) and who did not. (Jewish temple sacrifice fell with the Jerusalem temple and had been practiced only there.) So, no, that is hardly a shock; even less is it contrarian.

The standard Christian storyline, heavily dependent upon Eusebius’ The Church History, presents a “triumph of the Church” sort of tale, said to be about plucky people dedicated to the one God of the Jews who sent Christ, who were hunted and persecuted, becoming lion fodder day in and day out as they bravely evangelized and made a Christian world from their underground catacombs. They persevered in faith and devotion, until at last, the old gods were vanquished and Christ ruled the hearts of all and the worship of the true God was everywhere. God at every turn favored the Church until at last, by God’s privilege, Constantine became God’s servant.

O’Donnell is right to the extent that history is never as much “standard” as we might like, but Church historians have been on to Eusebius and the “standard” story for long, long time. O’Donnell is catching up.

If Pagans was a whodunit, all fingers would point at the Emperor Constantine as the prime culprit. He did it. In extreme telling, Constantine decreed the canon of Scripture and wrote the Nicene Creed himself single-handedly, and forced the bishops to swallow it, homoousios and all. O’Donnell never approaches that. Still, he – and most historians – will say Constantine’s unexpected favor tipped the Church toward becoming the Church we all know and love today.

Oh, I do not think otherwise. There is no denying what imperial favor did do. But few have ever argued, alternatively, that the Church was doing just fine without Constantine and, very likely, might have done better without him in the longer run.

What O’Donnell misses is the growth of the Church over three centuries without Constantine. By 300 AD it was perhaps as little as ten percent of the over-all population (estimates vary). But there were some urban regions where Christians had come to comprise at least a quarter of the population and perhaps a bit more. They were, without even trying, a social force in the empire.

In its first three centuries the Church had successfully self-organized around the ministry bishops; a hierarchy was recognized. Even among rank and file Romans, bishops had become familiar public figures and some were hugely respected. There were no empire-wide persecutions underway, and really had not been until Diocletian’s rule upset the Little Peace of the Church when the emperor Gallienus (253–268) issued the first official declaration of tolerance regarding Christians.

While some local areas had experienced punctuated persecutions, for most part for most of the history of the Church in this era, Christians quietly went about their business in public unhindered. The peace of the Church meant the growth of the Church.

The Church grew as a statistical inevitably (which isn’t to say statistics can never be used miraculously). Start with, say, one hundred followers in 33 AD and sustain a three percent annual growth rate and pretty soon you will find Christians everywhere in the Mediterranean. The rate was probably larger.

There were other factors to Christian growth. For instance, they did not in general abandon their sick when facing the Plague of Cyprian (named for the bishop of Carthage because of the account he left) 250-270 AD. More victims survived with Christian care than not, meaning there were more Christians to make more Christians. They did not abandon their children to exposure, and no doubt added to their numbers by seeking out foundlings who had been abandoned. Christian ethical teaching was not unattractive, nor unremarked.

Christians also had a history, pegged to Bethlehem, to Jerusalem, to a provincial governor of recorded name, and actual witnesses to Jesus who left records. It was there, Christians said, that God intervened in world history.

Paganism had no history. Pagan gods did not mess with history. Paganism was a collection of stories of this god doing this, that goddess doing something else. Christianity gave human beings a history, one in which their own origins and their individual actions figured prominently and with purpose.

These are only a few of the attractors O’Donnell omits in the history of how the traditional religions gave way.

From the second century on, when Rome was first becoming aware of Christians, the Church by simply existing, was a disruptive influence in Roman life. But it was a disruption aimed at persuasion. Its authority was based not on state coercion but on the Word it preached.

History is as history is. On the whole, I do not think the Christianity we have is altogether a bad one, nor do I think that it went off the rails, not for the most part.

But to say Constantine “did it” is a fast shortcut that skips at lot of crucial tourist sites along the way, and it does not account for the three previous centuries of the Church. Pagans is an entertaining book, sometimes insightful, but it could have been more imaginative. 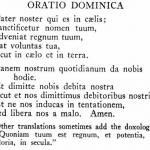 Catholics Should Have Nothing to do...
On the Catholic Beat
Related posts from The Vatican II Lutheran