Intuition and the Sacred Imagination 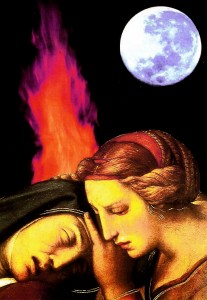 “You say God speaks to you, but it’s only your imagination.” These are the words spoken by the inquisitor to Joan of Arc during her trial for heresy.

“How else would God speak to me, if not through my imagination?” Joan replied.

We know the story of Saint Joan and her visions and voices that led her to victory for France several hundred years ago. Her sacred imagination was the fertile field where her human self journeyed to co-create with her intuition and Divine inspiration. The marriage of her ingenuity combined with her rapt devotion to her intuition and her fervent faith changed the course of French history and herstory.

We are also blessed with the potential to engage our sacred imaginations in co-creation with God.  When we combine our intuitive urges with the unlimited potential for creative expression, we have the opportunity to birth new projects, innovations, and ways of living authentically. If intuition is the voice of the soul, the sacred imagination and creativity are the hands of the soul.  Intuition delivers guidance from Spirit.  Creativity transforms the guidance from within, into tangible form.

Intuition is born in a place of mystery—–in an effable place between the heart and soul beyond the psyche and the calculation of left-brain thinking.  It sometimes whispers and occasionally shouts to the senses as a mystical invitation to join the dance of co-creation.

When intuition calls, we are invited to take action through the activation of the sacred imagination and creative expression.  Initially, the message from the intuition may seem unclear. Sacred art-making offers a way to crack the code imbedded within the message. Setting the intention to engage and dialogue with intuition through creative exploration often leads to places of discovery and innovation. This is the dance of co-creation. The partners are Spirit and matter.

Several years ago I was invited to co-create with my intuition while I was preparing to leave for a long overdue vacation.  It was a frenetic day.  There were plants to water, errands to run, and suitcases to pack.  All morning as I ran from one task to the next, I was plagued by an urgent recurring message being broadcast from that mysterious place between my heart and soul.  “Fire. Think about fire. Make a collage about fire.”  This bizarre request from somewhere deep inside me was relentless. The messenger was my intuition.

I felt anxious and annoyed by these intrusive thoughts while at the same time I had a growing awareness not to ignore them. With an intense sense of urgency I stopped my whirlwind of chores, made a sandwich for sustenance, and went to my office to give the inner voice what it had been asking for.  The following two hours were spent searching my collection of books and magazines for just the right images to express the power and mystery of the element of fire. After cutting and pasting the various pieces together the collage was complete.  I stared at it with relief and curiosity.  I was relieved that I had silenced the nagging messenger, and deeply curious about the actual meaning of the collaged image I had created.

I returned to the busyness of the day but my preoccupation with thoughts of fire continued.  I contemplated how I would escape and quickly grab cherished photographs and journals if there were a fire in our home. I thought of the horror endured by those souls who were burned at the stake in medieval times.  My mind even wandered to the wonder and hypnotically romantic beauty of a beach bon-fire on a summer’s evening. Throughout the entire day it seemed as if fire and I were engaged in a kind of mystical dialogue.

That night I finished my packing and crawled into bed.  It was then that my intuitive voice came calling again.  “There will be a fire.  You will be okay.”

The tone of the communiqué was matter of fact, not alarming but informational and reassuring. I was exhausted and eager to go to sleep, knowing I needed to be awake very early to catch a plane.

I remember falling asleep effortlessly that night. My dreams seemed fragmented and chaotic so when I heard the distant sirens I thought they were part of my dreamtime. The sound came closer. When I opened my eyes I was alarmed to find my bedroom washed in a soft orange flickering glow.  My senses were instantly charged by the view out my window of towering flames and the smell of smoke that intruded like an unwelcome visitor. Across the street on the adjacent block a neighbor’s home was burning to the ground.  A tragic occurrence, but fortunately the occupants were away and no one was injured.  We lived at the time in a heavily wooded area. It was a very foggy windless night so the forest was spared and the neighborhood was miraculously protected.

It wasn’t until the fire was extinguished, and I was in the shower saying prayers of gratitude for safe-keeping that I received the jolt of remembering the collage I made the day before, and the intuitive message before bedtime. I was stunned.  How could I have had inklings of this event?  Was there something I might have done with the information I had received before the fire?  I was filled with awe and confusion. Intuition often confounds us while providing guidance and direction simultaneously.

Several days later, seeking wisdom and counsel I called a dear friend to get her take on this experience.  I shared my story and angst with her and she replied, “Your collage was a visual prayer.”  She went on to explain she felt I had somehow tuned into a frequency advertising the impending fire.  My friend believed that my need to create the collage was a direct response to my intuitive guidance through creativity.  This in no way magically protected me or my home, but rather my art-making created an energetic intuitive field that increased my awareness. The intention to dance, to engage, and to co-create with my intuition led me to a deeper exploration of the internal messages themselves.

Because of my day-long dance with fire, I was prepared for conscious action in the event of imminent danger. If the fire had spread, causing me to evacuate my home, my head would have been clear to collect the few precious possessions I had categorized earlier in the day. I even had a mental map of my escape options. I had been readied by my intuition for the possibility of a particular event.  My intuitive/co-creative interaction with the concept of fire had centered and equipped me for the happening itself. It wasn’t until months later that the deeper spiritual meaning of the experience would emerge—a new inspiration and direction for my life’s work.

As a result of this singular intuitive experience, visual prayer, is now a central focus of my workshop/program development for women.  Visual prayer has grown to include not only collage, but any visual creative expression holding the intention for deeper spiritual understanding, or a desire for healing/transformation. Creating altars and devotional spaces, art making, gardening, arranging touchstones with intention, cooking and sharing a meal, all of these and more are visual prayers.

The encounter my intuition and sacred imagination experienced with fire, led me to create workshop experiences to share the gift I had been given. The gift was an understanding that the integration of creative energy with intuitive guidance holds the potential to enrich soulful living, initiate healing, and facilitate transformation.

Intuition, the frequency my friend referred to, is not some obscure ethereal vibration available only to those who possess special psychic abilities.  Rather it is a constant source of wisdom and guidance from within available when one is open to sacred mystery and discovery.  Listening and awareness are the dials for tuning in to our inner radios. When an intuitive message is received your sacred imagination offers you a myriad of possibilities for expressing the information you have been given. The additional spiritual component is the choice, the free will, to accept the invitation to begin the co-creative dance or to refuse it.

Consider how history would have been written if Saint Joan had denied listening to and trusting her intuition, and she had not called forth her courage and creativity to express what she intuitively knew.  Intuition and the Divine spoke to her and she responded through her sacred imagination.

Her clear statement to her inquisitors…. “How would God speak to me, if not through my imagination?” holds spiritual wisdom for our lives today.  The imagination is sacred territory to be cultivated and explored.  Let the journey begin.

July 9, 2012 Seeking Peace in the Fields of Time
Recent Comments
0 | Leave a Comment
Browse Our Archives
get the latest from
New Visions
Sign up for our newsletter
POPULAR AT PATHEOS New Visions
1

Predictions for 2022
A Happy Medium
Related posts from Sacred Illuminations 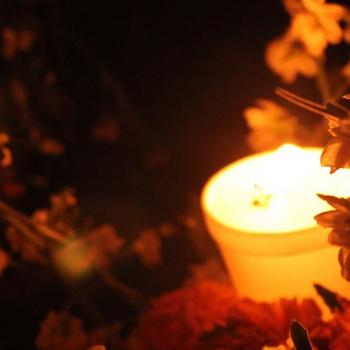 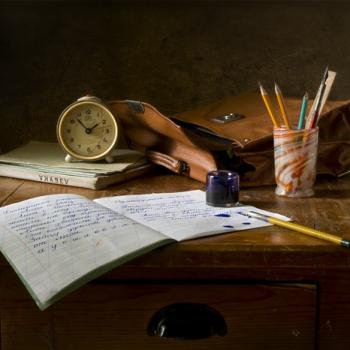 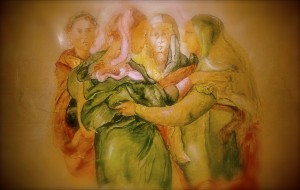 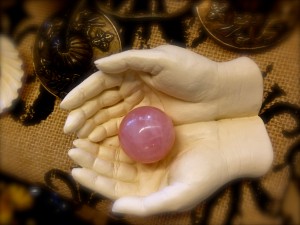