Those Immune to Violence Arm and Disarm

My late Tio “Manino” (short for Marcelino) had an bottle of Mexican brandy beside his recliner. Presidente. He was well into his eighties, past his drinking prime, so I asked what it was for. He replied that, with all the break-ins and robberies and murders that were commonplace in his neighborhood, especially ones targeting the elderly, he had come up with a strategy: if a thug entered his small trailer-house he’d tell him there’s nothing to be stolen, nothing of value, but he’d invite the criminal to take a seat and have a drink. Una copita. Then another one. And three or four more. And one after that.

“Once he’s good and drunk,” my Tio said with dark mischief in his eyes, reaching his large, wrinkled hand underneath the recliner, “I’ll cut his neck with THIS!” A three foot machete, sharp and terrifying, like something out of a Cohen Brothers film. Real.

The night before my grandmother’s funeral, after the rosary and visitation, a second cousin I never knew was shot to death at a party. We mourned her, not him. Just a sigh and a look and a shaking of the head. “His poor mother.”

When you drive the streets of  their neighborhood in Pharr, Texas, it’s common to see shattered glass sprinkled across the pavement. Broken car windows. Signs of a break in or a shooting or both. All my great-uncles, like my grandfather, were armed in three ways or another. They were born and raised on a horse ranch, where guns were essential tools. I will inherit my great-grandfather Crecencio Rocha’s Winchester lever-action 30-30 from the late 1800’s. I’ve shot it before. I took a whitetail doe’s life with it, in some woods close to Brady Lake in Brady, Texas.

There’s a big difference between hunting and self-defense. I don’t hunt anymore, but I think I’d like to start again. Bowhunting? In hunting the gun is a tool in one of two senses: a tool for sport, like an expensive tennis racket, or a tool for work, like a tractor. Tools can be lethal, but their purposes justify or discredit them. Although I am not well acquainted with hunting for pure sport, I know that hunters of either class are like athletes or farmers: they usually take good care of their tools.

This distinction holds for self-defense, too, but with different implications.

Most people buying guns and paying to go to ranges to shoot at targets with their safety goggles on and ear-plugs safely in, enrolling in classes to get permits and so on — let’s be honest: these people don’t really need guns. They don’t hunt and their lives are not frequently in danger.

They are not a rural farmer tip-toeing out into the dark in his underwear, squinting, carrying the twelve-gauge he normally uses for bird hunting, shooting into the air once, which warns the kid trying to steal starter-fluid to make meth, and then shooting again towards the noise, half hoping he kills the son-of-a-bitch, half praying he gets away safe but never comes back. A little scared, too.

These valiant gun lovers also do not live in places where shootings happen weekly; where violence and crime, motivated by poverty and desperate ways of making a couple hundred dollars, take life indiscriminately and routinely without national news reporting; where the schools are guarded like the prisons that they are and night clubs require a metal detector wand and a pat-down and still have bi-monthly shootings in the parking lot.

No, the people who are arming themselves these days to assert their “2nd amendment rights” and whatever else the NRA and Fox News have sold to them, these are not people in imminent danger. When violence happens in their quiet privileged communities, they make the news and we mourn for them — as we should when the exception become the norm. Or is it the other way around?

Their neighbors, living next to them or a bit further away in the trendy, hip side of the city, away from the ghetto or the barrio, these pious mirror images who are now beating their anti-war war drums on Twitter and calling for a ban on all guns, these ones are not so different either. They are not hunters, for reasons as principled as they are ignorant. They are not interested in defending themselves because, like their gun loving twins, they know they’re not in any real danger. 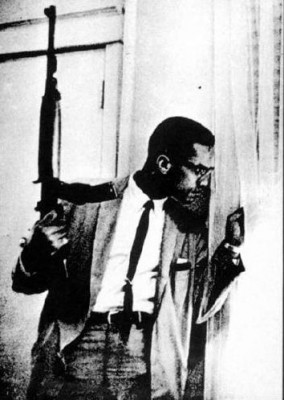 They claim to adore Zapata and Guevara and X and other brave martyrs of the left. They claim to hate the military industrial complex, but they don’t have the slightest problem letting the very same nation-state disarm it’s public. They don’t know much, actually, and their adoration of Tarantino doesn’t jive with their sudden nose-thumbing at violence in the media. They are strangely silent about the school shooting at Kent State.

These sanctimonious gun-banning professionals and college students are just as insulated as their right wing counterparts. Sure, they might not all live in suburbia, they might think they are worldly and multicultural and progressive, but they forget that while Martin Luther King Jr. may have been unarmed, his body guards were packing heat. Assault weapons even. They also seem to forget that their beloved, humane President has knowingly and willingly made use of assault weapons. Drones are assault weapons, right? Where are the calls for a ban on drones? Where is the mourning of the innocent children in the Middle East?

Both sides, that see arming or disarming as a new, fancy way to prevent future violence, miss the present and past reality: violence is ubiquitous and has been for some time. Guns are here and have been here, owned by many people who got them for hunting or self-defense long before they became ideologically convinced that the existence or non-existence of guns is the problem.

We harbor the largest, most aggressive, and active military in human history. How do we end violence? Really? Is that even a serious question?

Neither side seems willing to admit to what is really going on right now. We’re just lashing out at anything that moves. Buying guns they cannot use properly is silly and dangerous. Stupid. Banning them for those who, like my relatives, (sometimes tragically) need to use them is equally outrageous.

What is the difference between a thug, strapping a glock to his hip, and a nation stockpiling nuclear weapons? There are some differences. But the absent ones are salient again. After 9/11 we went to war. Why? Because we needed to. We needed to vent. We punched a hole in the wall.

Right now things are not very different. Kids being shot in cold-blood, amplified by the sub-genre called “school violence” and 24-hour footage and universal coverage, weighs on us all. As it should. Prayer, questions, doubt, terror, melancholy, paranoia: all of it makes sense. Show respect for the living and the dead.

Insisting that we either need guns or must eliminate them to prevent this from happening again is just a wounded projection of the fact that we are always already immersed in violence. Everyday. Physical and mental and spiritual violence.

Maybe we can make the places that we are not ashamed to look at or afraid to live in safer. The schools that seem so pristine and innocent. The middle class paradise of suburbia and Hipster Town. The pleasant fantasies removed and disjointed from rural anxiety and urban pain — and international terror. Maybe those places where our news comes from, the unreal place from whence I am writing, where reality television reminds us of the alligator-killing exceptions out there, in the wild, maybe these places can be secured. But it will be a false peace, a carefully manicured victory. A mere illusion. Sterile.

I don’t have any solutions because I remain unconvinced that we have truly understood the problem — gun advocates and apologists alike be damned.