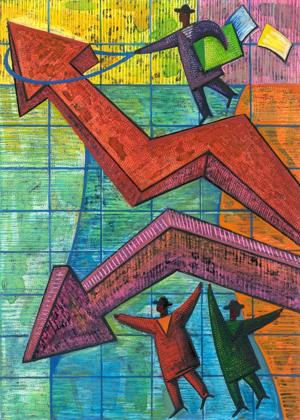 I have no misgivings about, nor apologies for, my near total ignorance of economics. I don’t know the special terms nor do I possess insight or erudition about its governing concepts and intellectual history. Sure, I’ve read a thing or two. But nothing technical. In the very little I have read, especially around election time, I get the impression that the application of econometrics to business and politics are, more often than not, inexact or flat out wrong.

Economics as we (don’t) know it, is kin to psychical research, the paranormal, and Dr. Phil in this regard; which, of course, only goes to show the following: what most of us take to be economics, is really just a shell of popular and over-politicized nonsense, built for public consumption and quick-fix consulting. Not the real thing, if there is one.

I know next to nothing about economics, but I do know a little bit about trying to make sense. Behaviorally speaking, making sense is really nothing more than building a reservoir of sensible intuitions about things and using it to measure other things. Sometimes, the intuitions get beat and the reservoir changes and adjusts. But the reservoir should win more often than not. Otherwise, a more serious reassessment is in order. A crisis in faith ensues.

One of the reasons I find positivistic social science research ridiculous or forgettable (or both) is because it often behaves like a bad gambler. It thinks it can beat the house with regularity, without cheating. Newton beat the house. Einstein, too. Can we name one, just one, statistics-strapped social scientist who has done anything like that? I didn’t think so.

Even worse, social scientists sometimes become so deluded as to think that the human reservoir of intuition needs its imprimatur to confirm it in the way that Newton’s laws clarified what is going when we play sports or go to the moon. Its own failure in producing these dubious aspirations, via findings that last more than a decade or two, ought to settle the matter until there is durable evidence that suggests otherwise.

Back to economics: in case you haven’t heard, national politics demands that we pretend to know something about “the economy.” Does anyone really know what this thing “the economy” is? There are many reasonable descriptions out there, but I am not in a position to entertain them here.

If “Rocha’s law of inputs and outputs” is as useful to understanding commerce as it to fixing a leaky tire or watering plants, then, it should be clear that the commercial state of the national economy is  topsy turvy on both sides of the aisle.

Democrats and Republicans seem to be making the mistake of positivistic social science in thinking that the answer to the question is more reliably sought by betting against the house of common sense than by trying to use it.

If the federal government is understood as a household, are we really to believe that more income plus added shopping and aggressive investing will team up to better provide for a family in poor health and chronic debt? The other side isn’t any better. Should we instead think that less income and shopping paired with timid investing will do any better? Are these the only options?

A great deal of ideological and philosophical assumptions have to be sorted out first, along with the devilish details. In the meantime, let me assure you that there is nothing wrong with saying “It seems that we might want to consider increasing our profits, decreasing our debts and liabilities, and being cautious but not stupid about investments, if we want to have a family that can provide for its children, be hospitable to its guests, keep its property in good repair, and so on.”

Both parties have packaged and sold an economic narrative that does not accurately represent reality and contradicts all common sense. There is no such thing as a truly free market nor is there a truly free lunch. The litany of contradictions on both sides are not evidence of hypocrisy so much as lunacy.

Sure, you can argue that you need to spend money to make money, but that truism only goes so far. Just ask a former small business owner, or become one yourself. And, yes, you can promote the idea that by empowering the rich the poor will prosper, but that also has its limits. Just ask your heart, if you have one.

In the end, selling an exception as the rule makes for nonsense, nuttery, and a crazy public that doesn’t have the slightest clue as to which side is up or down or what is going on and why it should care. If someone is going to make their point indirectly, then, they have the burden of justifying why the direct route proved insufficient in the first place.

The Catholic alternative is not to thrust these two downright crazy narratives about economics into Catholic Social Teaching. Don’t poison the well. We should do the exact reverse, obviously. We don’t need to translate Catholicism into US conservatism or progressivism, or whatever pet names you prefer. (And, no, we don’t have to become distributists either.)

This suffocating nonsense is opposed, in both directions, to the Catholic imagination. That so many Catholics in the US have spent so much of their time trying to force one square peg or the other, bespeaks a tremendous and off-putting lack of sense. It is insane. It makes us look crazy, sadly, because so many of us are crazy.

So stop acting crazy, just stop. As Catholics, we don’t need to agree about everything, but we should disagree with some dignity. Acting crazy doesn’t do that. At least in this case it doesn’t.

February 17, 2013 On the Death of Matthew Crawley
Recent Comments
0 | Leave a Comment
Browse Our Archives
Follow Us!

Pseudo-Profundity from Fake Voltaire
Catholic and Enjoying It!
Related posts from Sam Rocha