On this International Day of Yoga, let’s commit to mentioning yoga’s Hindu roots

This year marks the fourth year that the International Day of Yoga will be celebrated, on June 21st. As someone who has practiced yoga in one way or another since the mid 1990s, it feels great to have an official day recognizing the tradition, teachings, and benefits of yoga.

For those that have come in late: the International Day of Yoga was established by the United Nations after the Government of India proposed doing so. Each year the activities surround Yoga Day (as it’s alternatively known) grow, with the Government of India still playing a leading role globally in organizing events and distributing materials about yoga.

There’s one thing, though, that needs to be pointed out in how the history of yoga is presented in the Common Yoga Protocol produced by India’s Ministry of Ayurveda, Yoga, and Naturopathy, Unani, Siddha, and Homeopathy — better known by its acronym AYUSH.

On page 5 and 6, this document reads:

“Yoga is widely considered as an ‘immortal cultural outcome’ of the Indus Saraswati Valley Civilisation […] The presence of Yoga is also available in folk traditions, Vedic and Upanishadic heritage, Buddhist and Jain traditions, Darshanas, epics of Mahabharata including Bhagawadgita and Ramayana, theistic traditions of Shaivas, Vaishnavas and Tantric traditions. Though Yoga was being practiced in the pre-Vedic period, the great sage Maharishi Patanjali systematised and codified the then existing Yogic practices, its meaning and its related knowledge through Patanjali’s Yoga Sutras.”

I don’t dispute this history per se. Everything stated here is true. What caught my eye is something that’s missing in the above paragraph.

Can you spot it?

What’s missing is the word ‘Hindu.’ Other than the references to Buddhist and Jain traditions, everything in the paragraph is part of what we today call Hinduism.

This omission may be of little consequence for Indian and South Asian readers, most of whom will no doubt identify all the traditions, schools of thought, and scriptures mentioned as being part of Hinduism. But readers from the rest of the globe well may not realize that ‘Vedic and Upanishadic heritage’ refers to the heart of Hindu Dharma. They may not understand that ‘theistic traditions of Shaivas, Vaishnavas, and Tantric traditions’ refer to differ strands of Hinduism, all of which are very much thriving today.

Why? Because the Western yoga press has tried to distance itself from Hinduism.

Having been immersed in the Western yoga community for more than two decades, I’ve seen how many yoga magazines and companies have tried to distance themselves from ever using the word ‘Hindu’, preferring to use ‘yogic’, ‘Vedic’, or ‘Indic’. I’ve seen them trying to feebly claim that that traditions of of yoga are beyond time and space or don’t belong to any specific spiritual tradition.

It’s against this background that I see the omission of the word ‘Hindu’ in AYUSH’s history of yoga as a missed opportunity to better educate the global public about the origins of the very thing it aims to promote.

Including ‘Hindu’ in the description, contextualizing all that has already been included, would have allowed AYUSH to reiterate two the greatest strengths of the Hindu tradition: inclusivity and non-proselytizing — only furthering the message that you can be of any background and still benefit from yoga.

None of this should be taken as a criticism of International Day of Yoga itself, nor indeed the thoroughness with which AYUSH has listed all the different threads that make up the fabric of yoga. Rather, a simply inclusion of the word ‘Hindu’ would’ve helped foreign readers comprehend better the relation between yoga practice and the practice of Hinduism more broadly.

There are many events marking International Day of Yoga 2018 across the United States and across the world. Whether you’re yoga-curious or a seasoned practitioner, sometime in the next 10 days, there’s no doubt an opportunity to participate in Yoga Day near you. 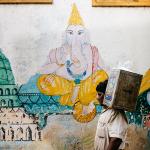 June 9, 2018
In ‘5 facts about religion in India’ Pew misses some crucial ones
Next Post 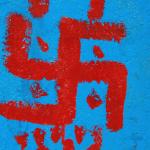 July 2, 2018 In pulling photo of Nikki Haley in front of Hindu swastika, Reuters failed as journalists
Browse Our Archives
Related posts from Samudra

Will Hinduism Rise with Prime Minister Rishi Sunak,...
Nothing is more historical than the Conservative party choosing a devout Hindu,...
view all Hindu blogs