Our Mother who art in heaven…

I’m trying this new thing where I don’t just think of God as a man. Where I get this image out of my head that God is an old man that looks like Gandalf and has Morgan Freeman’s voice. Where I let God out of this box of masculinity that God’s been confined to.

It’s difficult. The images of God that we focus on in the Bible are all quite masculine. God is a Father. God is a King. God as a husband. God is He and Him. And to complicate matters, the preachers that have always told me about God were men. Jesus was a man. The twelve apostles were men.

Our male pastors and theologians remind us of this over and over and over until it almost seems like blasphemy when someone suggests that God doesn’t look like George Bluth Sr. with a beard. In fact, I’ve been told twice this week alone that to call God a woman is disrespectful to God. 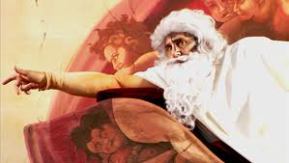 But, I think this view of God can be limiting.

The truth is, whatever God is, God isn’t really a father or a king or a husband. According to our Judeo-Christian tradition, God is something beyond our human understanding. God is a spirit that is neither male nor female. God is something that placed God’s image on each human–male and female and even those who don’t fit in either category. What we have with the Bible is humankind’s various ways of trying to understand and relate to this Abrahamic/Christian God–humankind’s attempt at documenting God’s interactions and impact on the world.

The writers of the Bible often do this by describing God as something that we can understand. We can imagine the protective father, the mighty king, and the faithful husband.

Furthermore, we Christians often describe God as an object or an animal. We can call God a rock, a tower. A shield. We can picture God as the roaring lion of Judah or the lamb being led to slaughter.

The argument I usually hear is that the Bible never pictures God as these things, and I can’t help but think that our male leaders have let us down or deliberately with-held information from us.

Isaiah 42:14 “For a long time I have held my peace…now I will cry out like a woman in labor”

Isaiah 66:13 “As one whom his mother comforts, so I will comfort you”

Isaiah 46:3 “Listen to me, O house of Jacob…who have been borne by me from before your birth, carried from the womb”

Deuteronomy 32:18 “You were unmindful of the Rock that bore you, and you forgot the God who gave you birth.”

Job 38:29 “From whose womb did the ice come forth, and who has given birth to the frost of heaven?”

Isaiah 49:15 “Can a woman forget her nursing child, that she should have no compassion on the son of her womb? Even these may forget, yet I will not forget you.”

Luke 13:34 “…how often I have longed to gather your children together, as a hen gathers her chicks under her wings, but you were not willing!”

With the exception of transgendered men, men do not cry out in labor pains. Men do not breastfeed their children. These are traits limited to those with a female biology.

Yet we never sing praises to God the mother.

In fact, these passages are rarely even brought up in discussions of God’s identity.

It cannot be ignorance. Our preachers who spent years in seminaries could not have missed so many obvious descriptions of the feminine aspects of God.

Are we so blinded by our preconceived notions of “Our Father who art in heaven,” that we read these verses never even stop to think that, perhaps saying “Our Mother” could be just as valid?

Or we afraid that if women could really see the image of God in themselves they would stop tolerating the second-class status that the church and society has placed them in? That they would start proclaiming that image with action and with words and with song?

Are we afraid that, if God is feminine, then what we have done to women in this world, we have also done to God?

Why do we not embrace God as our mother?

What are we so afraid of?

March 30, 2012 What I've been up to...
Recent Comments
20 Comments | Leave a Comment
Browse Our Archives
get the latest from
New Visions
Sign up for our newsletter
POPULAR AT PATHEOS New Visions
1

Are You Listening to the Still,...
Wake Up Call
Related posts from Sarah Over the Moon