Animals have empathy too!

You come home from a long day, tired and worn out. The boss chewed you out, so you’re also anxious and blue. You flop down in your recliner, reach for the remote – and feel the familiar, loving nuzzle of your faithful dog. It’s a heartwarming image, but does your dog’s concerned-sounding whining and extra attentiveness really mean he feels empathy for you? New research – and one local news story – hint that the answer may be yes, raising questions about the origins of empathy, altruism, and other traits often associated both with humanity and with religion.

It’s clear that animals have distinct personalities and, very likely, some type of subjective “selves,” even if those selves may be very different from human inner experiences. Anyone who’s owned pets knows that cats and dogs can be curious, inquisitive, scheming, quirky, and even dishonest – witness a cat jumping down from the counters to “pretend” it wasn’t up there in the first place. But do animals feel real empathy or compassion, emotions often held aloft by spiritual and religious teachings as among the highest human ideals?

Some research has suggested that some animals, including mice, may be able to experience “emotional contagion,” or the basic mirroring of another individual’s painful or pleasurable experiences. Mice may lick their own paws after seeing compatriots’ paws pricked by researchers’ needles, for example. But emotional contagion isn’t the same thing as empathy – it’s more a kind of a precursor or steppingstone to it. And until this December, no research had been published showing that animals such as mice or rats were capable of correctly understanding and reacting to the experiences of others, a common definition of true empathy.

That changed when University of Chicago neuroscientist Jean Decety and colleagues Peggy Mason and Inbal Bartal published the results of a study in Science magazine showing that rats were actually able to empathize with, and act to help, their fellows. The researchers introduced strange pairs of rats to each other and allowed them to get acquainted over a two-week period. Then they placed one of the rats in a clear enclosure – really a kind of cell, not much bigger than the rat itself – in the middle of the larger cage. Over the course of a week, fully three-quarters of the free rats with trapped partners learned how to unlatch the enclosures’ doors to free their compatriots. Meanwhile, only about one in six of the rats whose partners were not trapped learned how to open the doors, strongly suggesting that the rats were learning to unlatch the traps specifically in order to free their comrades.

Even more interestingly, most of the free rats would liberate their friends even when an identical trap was placed nearby filled with chocolate chips. And one-half of the free rats with trapped partners would actually save some (one or two) chips for their friends, a display of altruism that would appear to be fairly shocking by rat standards. (In fact, it seems unlikely that even humans would share chocolate booty with trapped comrades every time, although one hopes that we’d do at least a little better than 50%.)

It’s important to point out that these rats were not genetic kin, and so the usual evolutionary argument for altruistic behavior – that it assists family members, who in turn share some of one’s own genes and therefore are able to contribute to one’s inclusive, or non-direct, genetic fitness – doesn’t hold. And the evidence suggests that the rats’ altruistic actions were directly related to their partners’ distress, since the trapped mice gave out very high-pitched (presumably unhappy) squeaks that were recorded with sensitive instruments and heard by their free comrades.

Decety and colleagues say their work represents clear evidence that rats and other rodents are able to exhibit signs of empathy, which requires both experiencing another’s pain and having a sophisticated understanding of what that pain means. This ability has previously been thought to be limited to humans, great apes, and other simians, but with this research scientists have evidence of true empathy in a laboratory animal whose brains are much easier to study than those of, say, chimpanzees. The University of Chicago researchers hope this means that we will soon have a much clearer understanding of the neurological basis for empathy and altruism.

Not incidentally, a local news outlet in Pocatello, Idaho, recently reported an incident that may lend further credence to the claim that many – if not most – non-human mammals can experience and act on empathy. Zookeepers in the Pocatello Zoo were alarmed to see one of the zoo’s large male elks rooting around in his water container with his antlers, apparently at random. But instead of displaying signs of nascent insanity – always a scary proposition when the beast in question is the size of a Volkswagen – they soon learned that the elk was doing something highly unusual: trying to scoot a trapped marmot away from the edges of the container so he could carefully grasp it by the scruff in his teeth and move it onto dry ground.

While it may seem that the elk simply didn’t want a soaked marmot in his water dish (would you?), the fact that he then spent several moments nudging the little rodent with his hoof, apparently more interested in the marmot than in his now-clean water dish, at least suggests the possibility that the elk was motivated by a moment of empathy for, or at least shared distress with, his much smaller fellow resident.

The elk story is anecdotal, if well-documented, but the findings about rats’ empathic capabilities are peer-reviewed. If Decety and colleagues are correct, animals as small as rats have the ability to feel genuine empathy for, and act altruistically toward, their fellows, even when those fellows are genetically unrelated. This finding suggests that one of the primary ethical goals of myriad religious and spiritual systems – namely, compassion and its analogs – may not be necessarily the product of laborious religious training and moral instruction after all. It may be, like the capacity to breathe and digest, inborn. However, it’s also obvious that many people don’t act empathically, even if they might be able to. Perhaps, as Chinese philosophers Mencius and Confucius wrote, people naturally have good tendencies, but social instruments such as religious training are necessary to hone and refine them. After all, the rats only shared one or two chocolate chips, and only half the time. Maybe religion, as it were, helps us to share even more of the chocolate.

March 10, 2012 Mountains and mysticism
Recent Comments
1 Comment | Leave a Comment
Browse Our Archives
get the latest updates from
Science On Religion
and the Patheos
Best of Patheos
Channel
POPULAR AT PATHEOS Public Square
1

What Is Postmodernism? And Why Does...
Science On Religion
3

Central to the Abortion Debate: When...
Religion Q & A
Related posts from Science On Religion 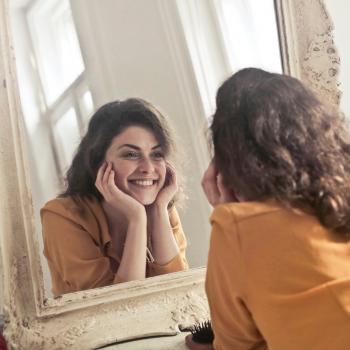 Central to the Abortion Debate: When Does Life...
THE QUESTION: When Does Life Begin? THE RELIGION GUY'S ANSWER: Those four...
view all Public Square blogs
What Are Your Thoughts?leave a comment
Copyright 2008-2021, Patheos. All rights reserved.