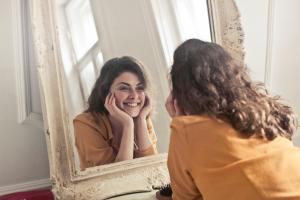 Life in 21st-century America – or any wealthy Western nation, really – is a nonstop celebration of individualism and nonconformity. To sell Sketchers, you dream up ads showing hip young people striking defiant poses, as if wearing a product manufactured by a S&P 400 stock index corporation were a courageous act of daring rebellion. College students and entrepreneurs learn to be “disruptors,”* defying established wisdom in favor of striking out boldly in new directions (and hopefully acquiring juicy seed funding). Everywhere you turn, the message from marketers, journalists, television, thought leaders, and college administrators is some version of “Be unique. Be individual. Throw off the suffocating weight of conformity and tradition. And buy stuff!”

Okay, maybe this is cynically overstating things a bit. But it’s a fact that American culture is WEIRD: Western, Educated, Industrialized, Rich, and (quasi-) Democratic. As such, it’s highly individualistic, is skeptical of authority and tradition, and strongly values personal autonomy and freedom. While these values have helped WEIRD people build some of the wealthiest and (until recently) most stable societies in world history, they also sit in real tension with basic truths about human nature. Namely, we’re designed by evolution to fit in and conform to particularistic cultures. As I’ve written here before, carefully copying other people is one of the most important traits of human beings, one that sets us apart from every other great ape. In a recent article at The Conversation, I delved into this topic further, describing a seminal experiment that shed light on this important difference.

The 15-year-old study in the journal Animal Cognition, by University of St. Andrews psychologists Victoria Horner and Andrew Whiten, compared the imitation responses of chimpanzees to those of human children in a demonstration-and-reward task. From my article at The Conversation:

(The researchers) showed two groups of test subjects – children and chimpanzees – a mechanical box with a treat inside. In one condition, the box was opaque, while in the other it was transparent. The experimenters demonstrated how to open the box to retrieve a treat, but they also included the irrelevant step of tapping on the box with a stick.

Oddly, human children carefully copied all the steps to open the box, even when they could see that the stick had no practical effect. That is, they copied irrationally: Instead of doing only what was necessary to get their reward, children slavishly imitated every action they’d witnessed.

By contrast, chimpanzees in Horner and Whiten’s study only over-imitated in the opaque condition. In the transparent condition – where they saw that the stick was mechanically useless – they ignored that step entirely, merely opening the box with their hands. …

When it comes to copying, chimpanzees are more rational than human children or adults.

This fascinating study spawned a veritable cottage industry of experiments by psychologists and ethologists examining this so-called “over-imitation” effect in humans and other animals. Time and time again, these studies have revealed that humans – including but not limited to children – prefer to laboriously copy all the actions that a model or experimenter demonstrates, even if they’re clearly irrelevant for whatever goal the task is supposedly meant to accomplish. And this effect isn’t just a matter of WEIRD psychology – the same phenomenon has been reported among the foraging South Africa San people, Australian Aborigines, Pacific Islanders, and Japanese preschoolers.

But wait. Isn’t our vaunted intelligence supposed to leave that of chimpanzees in the dust? So why would chimpanzees behave more rationally and efficiently than humans? Why would we be so easy to bamboozle into believing that mechanically useless actions are somehow magically important?

In general, researchers have offered three main explanations for over-imitation. The first is that we humans might over-imitate because we mistakenly believe that the extra actions really are mechanically necessary to accomplish the intended action after all. For example, in one study, children mostly ignored the extra arbitrary actions on a second box that was physically unconnected to the first. But when the second box was connected to the first box by a small bridge, their rates of over-imitation went up. It may be easier, then, to believe that a seemingly arbitrary action has a hidden causal effect if there’s some kind of physical connection between the two. But remember that, in the original Horner and Whiten study, the kids in the transparent condition could clearly see that the extra actions had no effect. Yet they performed them anyway. If mistaken beliefs about causality are part of the story, they’re not all of it.

Another explanation focuses on social affiliation. It could be that we humans over-imitate in order to forge emotional ties between ourselves and the people we’re imitating. Evidence for this hypothesis comes from studies showing that, for example, children over-imitate more when they’re worried about being socially ostracized.** But such studies don’t account for the fact that children also judge others who fail to over-imitate as morally deficient.

The third explanation, then, suggests that children (and adults) over-imitate because they implicitly believe that doing so is normative: that is, it’s something people ought to do, just like they ought to be nice to puppies. This normative dimension may be activated when subjects encode the action sequences they witness as conventions rather than as practical methods.

In other words, over-imitation may reflect our human tendency to cognitively process certain actions as “just the way we (expect people) do things around here.” If so, it’s a tribal function that allows us to identify and replicate the contingent conventions and rituals of our local community, whether that’s a hunter-gatherer band in New Guinea or a megachurch in suburban Atlanta. Chimpanzees, by contrast, don’t have anywhere near the capacity to generate and maintain culturally unique conventions and rituals. Yes, they do have cultures that vary by region, but those cultures are mostly limited to different kinds of tool use.

Human cultures, on the other hand, are rich amalgamations of technologies, languages, habits, and rituals that tend to make little sense to anyone not on the inside of them. And over-imitation is a significant part of what makes that possible. Again, from the Conversation article:

At heart, human beings are not brave, self-reliant innovators, but careful if savvy conformists. We perform and imitate apparently impractical actions because doing so is the key to learning complex cultural skills, and because rituals create and sustain the cultural identities and solidarity we depend on for survival.

In a real way, then, humans aren’t really set up to be bold and fearless iconoclasts or rebels that American marketers and academic trendsetters envision. We’re cultural conformists in a deep and and primal way, disposed from the get-go to hone in on and replicate the arbitrary conventions and rituals that mark off our own local groups. Our exquisitely developed over-imitative tendencies make it possible for us to pass down complex technologies to new generations, learn and teach language, and even take part in religious rituals. In order words, they make it possible for us to be human.

*Willfully ignoring that the word “disruptor” already had a perfectly serviceable definition.

** Caveat: the second of these studies used a prime in which children watched a video of a shape being socially “excluded” by other shapes. Call me a killjoy, but this seems like the kind of study that screams “I won’t replicate!”
_____

January 15, 2020
Extreme Rituals and Health: A Surprising Match
Next Post

February 21, 2020 Will Cognitive Gadgets Replace Evolutionary Psychology?
Recent Comments
0 | Leave a Comment
"Seems like contemporary culture is attempting a bold experiment: let's hope that individuals will arrive ..."
connorwood Why Rites of Passage Are Painful
"What is the replacement on hand? This question is from a father of two teenage ..."
Kripa Why Rites of Passage Are Painful
"I think with hindsight we have to say that Trump enabled Putin's invasion of Ukraine ..."
Barros Serrano So Long, Pax Americana
"Connor, have you perused the Biologos website yet? Biologos is an organization largely of evangelical ..."
Heather G Mashal Faith and the Evolutionary Predicament
Browse Our Archives
Related posts from Science On Religion